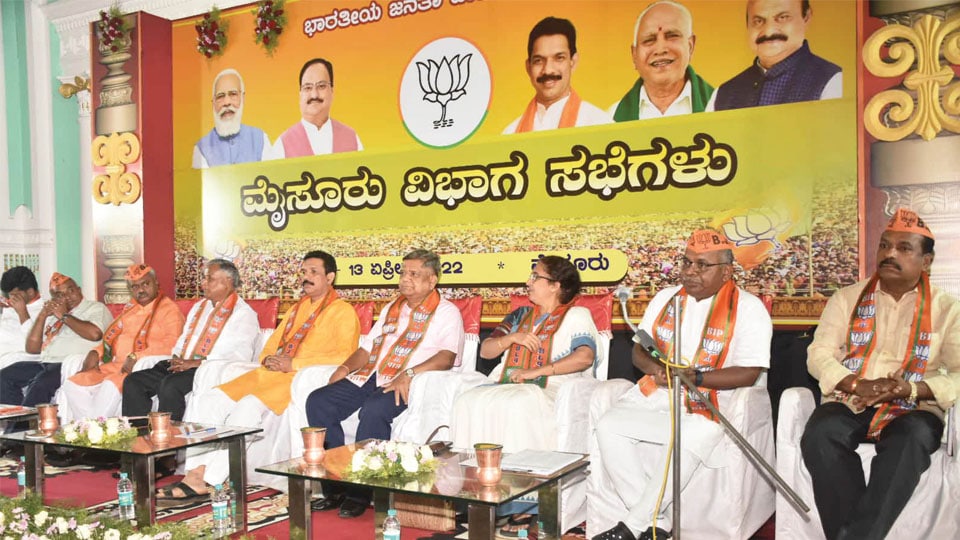 Mysore/Mysuru: Asserting that the party would retain power by winning 150 seats in the forthcoming Assembly polls, State BJP President Nalin Kumar Kateel said that the party’s organisational set up was very much active even during the COVID pandemic by responding to people problems and addressing several issues.

Addressing a press meet at Lalitha Mahal Palace Hotel here on Tuesday, the first day of the two-day Mysuru Divisional meet (Mysuru, Chamarajanagar, Mandya and Hassan districts) of the BJP, Kateel said that he has asked the party functionaries to set aside their differences and work unitedly for achieving the desired target of 150 seats. Pointing out that the party’s motto is ‘ Sarva Vyapi – Sarva Sparsha,’ he contended that the people are increasingly reposing their faith in the BJP.

“Prime Minister Narendra Modi’s work has been globally acknowledged and taking note of this many leaders of the Opposition Congress and JD(S) are looking to join the BJP. The PM’s handling of the COVID pandemic crisis has been appreciated worldwide”, he said adding that the BJP relies only on development works and good governance to come to power.

Reiterating that the party will not have an understanding with any other party for the 2023 Assembly polls, he said that the BJP banks on organisational strength and strategies to win the polls. He further said that he has asked all partymen to shed any differences among them and to strive together for achieving success in polls. Also, the local units have been directed to constitute Page committee for every page of the electoral rolls, he added.

Referring to the recent activities of Srirama Sene, which led to communal disturbances in the State, Kateel said that the BJP has nothing to do with the Sene and it cannot be held responsible for whatever the Sene does.