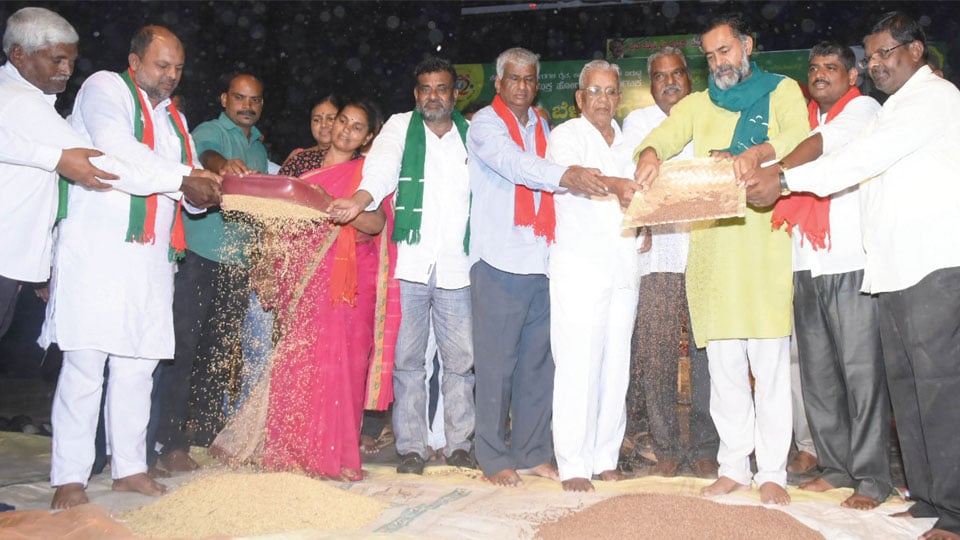 Farmers dumped their produce in front of MP Pratap Simha’s office at Jaladarshini Guest House on Hunsur Road in protest, alleging that the farmers across the nation were not getting the MSP though it has been announced by the Centre last year following a year-long  protest by farmers.

Farmers and activists demanded that the State Government prove it was buying agricultural produce at the MSP rate. Accusing the State of being insensitive to the issue, they contended that the Government had involved itself in unnecessary issues rather than showing concern for the farmers and addressing other burning issues.

Addressing the farmers, noted activist and SKM Convenor and Swaraj India leader Yogendra Yadav said that Prime Minister Narendra Modi says that the MSP is already there and will remain forever and wanted to know why is it was not available to farmers when it is there on paper.

Asking the Government to show an example of a farmer getting MSP, Yadav demanded that the grave injustice being done to farmers in the name of MSP must stop. The SKM is holding protests, demonstrations,organising seminars and other events in the country from Apr.11 to 17 in support of MSP, he added.

Warning the Government of a long movement if the MSP as announced is not given to every farmer in the country, Yogendra  Yadav argued that the farmers are not seeking Dhaan (donation), but Dhaam (Remunerative price). Pointing out that farmers are Annadaata (food providers), he said that they should not beg for better prices. The price for all agricultural produce is the  right of growers, he maintained.

Responding to Yadav’s  demands, MP Pratap Simha said that the MSP is already there but there were some procurement issues that need to be addressed. Noting that the State Government got Rs.1,341 crore from the Centre for procurements under MSP, the MP said that the issues concerning MSP has been already discussed with Union Minister of State for Agriculture Shobha Karandlaje.