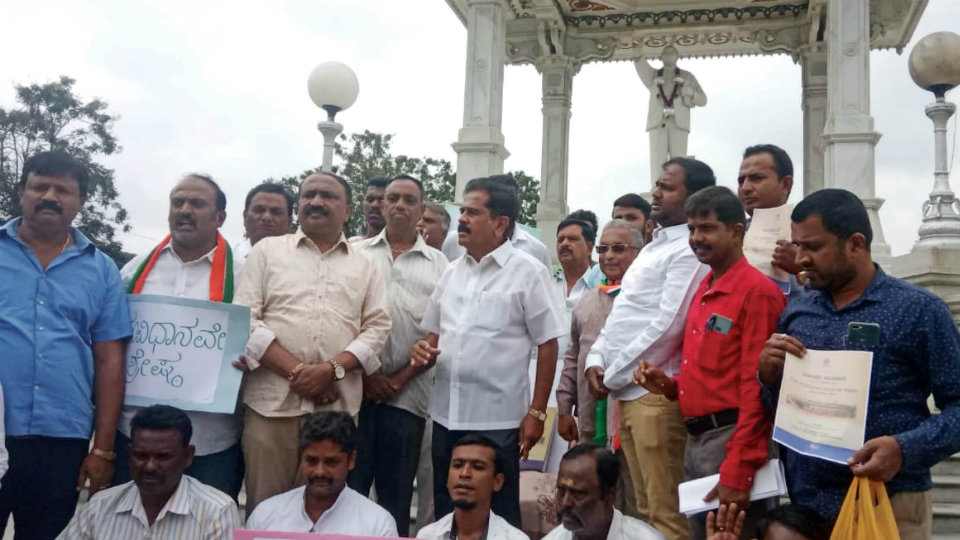 Mysuru: “BJP is resorting to unethical and unconstitutional practices to grab power,” alleged former MLA M.K. Somashekar. He was speaking after garlanding the statue of Dr. B.R. Ambedkar at Town Hall premises here this morning after paying  respect to a copy of the Indian Constitution placed on a chair there.

Throwing light on the developments in Maharashtra over the last three days, Somashekar ridiculed BJP for misusing the office of the Governor, grabbing power and losing too, thus becoming a laughing stock before the public.

He advised Prime Minister Narendra Modi and BJP President Amit Shah to respect the Constitution and run the Government for the remaining tenure without joining hands with corrupt leaders to grab power by hook or crook. Referring to the scenario in Karnataka, Somashekar recalled that BJP literally purchased the disqualified Legislators for crores of rupees each, gained power and fielding them again in the by-election.

He accused BJP in again luring voters with money to get those candidates elected to remain in power which amounts to sheer mockery of the Constitution and the Apex Court. He expressed confidence that the knowledgeable voters were keeping tab of these unscrupulous practices of BJP to give it back at the right time as power obviously is a Snake-and-Ladder game.