Home » Feature Articles » “We The People”— Part-3: Interesting facts about the Constitution of India 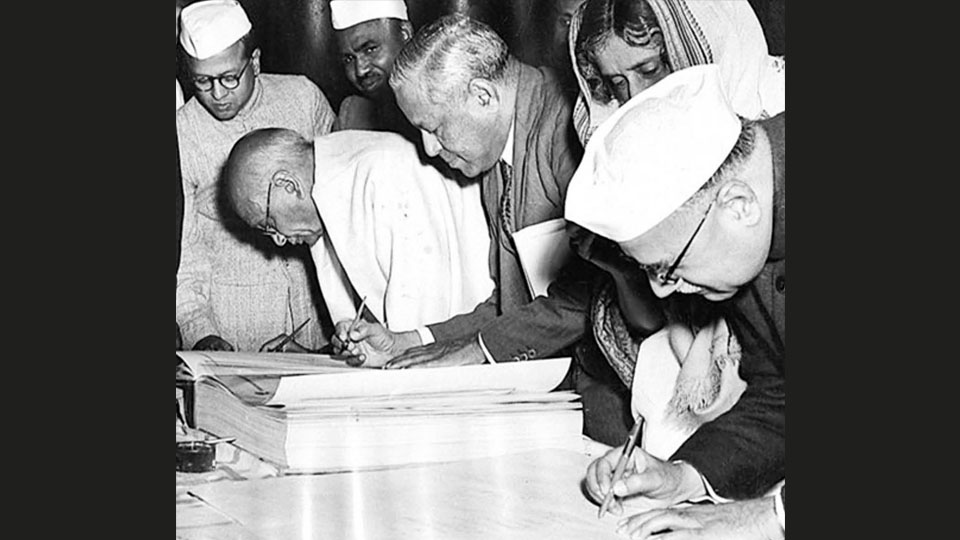 “We The People”— Part-3: Interesting facts about the Constitution of India

The basic five principles of  the Indian Constitution are: a Republican State, a Parliamentary form of Government, a Federal Structure, Fundamental Rights and an Independent Judicial Branch.

The directive principles have been taken from the Irish Constitution, our Parliamentary type of Government with a cabinet system that is accountable to the lower house is an idea that the makers got by studying the British Parliamentary system. The Supreme Court, our Fundamental Rights, and the role of Vice-President were suggested by the Constitution of the United States of America. Emergency provisions were picked from the German Constitution, and the French Constitution influenced the concepts of liberty, fraternity and equality. The Japanese Constitution influenced the principles about the functioning of the Supreme Court.

On 24th January 1950, 616 signatures were made by 308 members of the Assembly on the two hand-written copies (Hindi and English) of the final draft of Constitution of India. Each member signed both Hindi and English copies of the Constitution. The very last signature is that of Feroze Gandhi. He has signed in two languages, first in Devanagari and then in the Roman script. Most others have signed in English, the exceptions being Abul Kalam Azad in Urdu and Purushottam Das Tandon in Devanagari.

After two days, on 26th January 1950, the longest written Constitution of the world that incorporated 448 Articles in 22 Parts, 12 Schedules,  and 97 Amendments, was validated and found effect across every corner of the country. It is the most voluminous Constitution in the world. There are a total 1,17,369 words in the English version of the Constitution of India.

On 29th December 1929, Jawaharlal Nehru called for a meeting of the Indian National Congress in Lahore, where the National Flag was unfurled, and a call for Purna Swaraj was made (complete self-rule; purna – complete, swa – self, raj – rule).  On that day the Congress set 26th January 1930 as the day of Indian Independence. Hence, 26th January 1950 was chosen as the day when the Republic of India became a reality.

The long form name adds the word Republic of in English, Ganarajya in Hindi, Jumhuriyat in Kashmiri and Urdu.

On 26th January 1950, the Indian Government also adopted Sarnath, the Lion Capital of Ashoka with the wheel, bull, and horse as the national emblem of India.

Every year the Republic Day is celebrated with a grand parade, with some international dignitary as the chief guest. The then President of Indonesia, Sukarno was the first guest of honour in India for the Republic Day celebrations in 1950.

The celebrations, till today, last for three days, ending with ‘Beating the Retreat’, a military ceremony held at Vijay Chowk on 29th January every year. It was first started in the 1950s by Major Roberts of the Indian Army who developed the unique ceremony of display by the massed bands. The evening ends with the hymn Abide with Me, which was Mahatma Gandhi’s favourite.

PS: The Indian Constitution and the Constitution of United States of America (USA) start with the same words “WE THE PEOPLE.” These three simple words represent the collective will and wisdom of the people and their vision for the legal and social future of their nations.

The Rajya Sabha TV has produced a serial called “SAMVIDHAN” directed by famous Director Shyam Benegal. It is available on YouTube.  This ten-part serial is well-produced and shows our founding fathers Nehru, Patel, Dr. Ambedkar, Munshi, Kripalani, Amrit Kaur and others nicely and vociferously debating every part of  the Constitution.

The first Prime Minister of India Nehru and first Deputy Prime Minister of India Patel inspired the confidence of many civil servants, who had worked for the British Viceroy’s administration.  They persuaded them to stay on in the new administration of newly-independent country and help build the new fledgling nation. The two most important Constitutional servants were V.P. Menon, who helped to integrate the Indian States and another one is Benegal Narasinga Rau, who played a major role in drafting the Indian Constitution. The name of Sir Benegal Narasinga Rau, who played a major role, second only to that of Dr. B.R. Ambedkar, should be remembered and commemorated in a suitable manner.