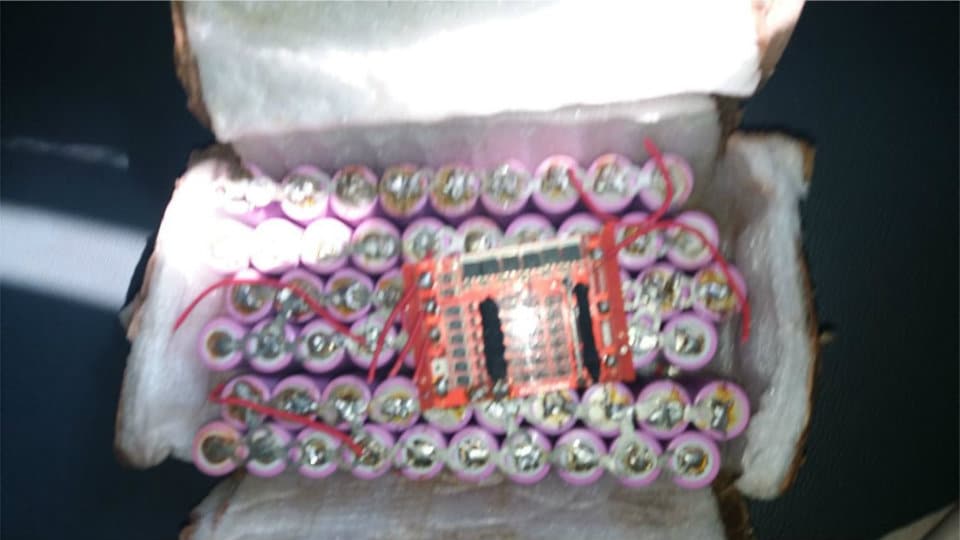 Mysuru: Tension prevailed around People’s Park, Sub Urban Bus Stand and surrounding areas this morning as people spotted men in khaki, accompanied by bomb squad, dog squad and finger print experts, searching for a bomb that was reportedly planted near the Park. Curious onlookers surrounded the Park as Police conducted the search.

The City Control Room received a call from an unidentified person at about 8 am today and the caller claimed that he has planted a bomb at the People’s Park that will explode soon. Not taking any chances, the Control Room staff alerted the Nazarbad Police, ACP Devaraja Sub Division, City Finger Print Unit, Dog Squad and Bomb Disposal Squad.

Teams rushed to the Park and launched an intense check. They recovered a suspicious box covered with cardboard and plastic tapes in front of the arch (opposite Sub Urban Bus Stand) on Bengaluru-Nilgiri Road. When they opened it, the Police found batteries and electrical circuit.

There were over 60 batteries connected to each other using an electrical circuit. However, no timer to set off the bomb was found. Though the bomb seems to be planted to create panic, it is suspected to be an Improvised Explosive Device (IED).

The Police will send the devise to Forensic Science Laboratory in Bengaluru for examination. Nazarbad Police, who have registered a case, will probe the antecedents of the caller and the place from where the phone call was made.

Devaraja Sub-Division ACP P.S. Rajashekar, Finger Print Unit ACP Rajashekar, Nazarbad Inspector Shekar, Finger Print Unit SI Appaji Gowda and others were involved in the search operation. It may be recalled here that an explosion rocked the Mysuru City Court Complex on Aug. 1, 2016 at about 4.15 pm disrupting the Court proceedings. The explosion was reported from the toilet block. However, there were neither any injuries nor casualties reported from the incident.

READ ALSO  People’s Park Library to be completed by October

It is only a power bank, says City Police Commissioner

City Police Commissioner Dr. A. Subrahmanyeswara Rao, speaking to Star of Mysore, ruled out that the recovered material was a bomb and said that it was only a power bank. The object might have fallen down at the spot from a vehicle or someone would have dropped it.

However, he said that the Police had taken the matter seriously and would investigate. CCTV visuals will be examined to identify the miscreant, the Commissioner added.