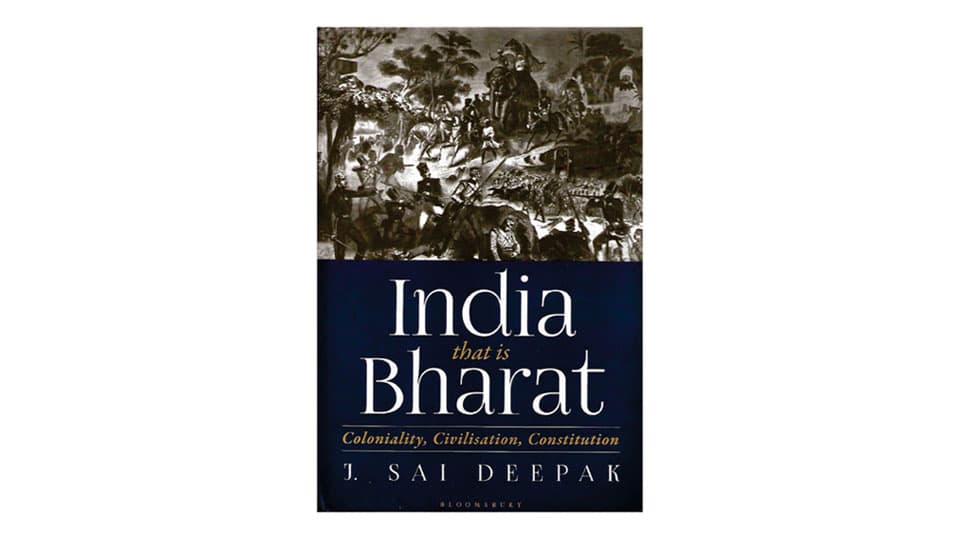 Book talk: A path-breaking research work – India that is Bharat

Title of the book India that is Bharat may echo the first two words in the Article 1 of our Constitution. However, Sai Deepak has chosen this format to portray stark contrasts between two — India that emerged post-independence and Bharat that was part of Indic Civilisation. Sai Deepak has mined voluminous historical information to establish the schism between India and Bharat and the contributions of colonisers leading to that schism. This book is  the first of the proposed trilogy.

Sai Deepak claims that the three events that occurred within a short span between August and December 2019, namely, Amendments to Articles 367 and 370 reorganising the State of Jammu & Kashmir; Supreme Court’s decision affirming the ownership of the Deity Shri Ram Lalla over His birth-place in Ayodhya, thereby validating a 500-year-old Indic civilisational and religious movement to reclaim Shri Ram Janmabhoomi; and Amendment to the Citizenship Act 2019,  have given titanic shifts in the Indian history that touched upon quite a few fault lines, unresolved legacy and civilisational issues. He feels that these and more so the subsequent events questioned the very legitimacy of the Indian State and Indic society. This made him to dig into historical records to understand how such fault lines and unresolved legacy permeated into our Constitution and post-independence national psyche. The consequential result was this book.

Scope of this book

In this book, Sai Deepak has tried to explore the influence of European colonial consciousness and coloniality on Bharat, in particular its religious and racial roots, as the successor State to the Indic civilisation and the origins of the Indian Constitution. This book lays the foundation for its sequels and  covers the period between the Age of Discovery, marked by Christopher Columbus’ expedition in 1492, and the reshaping of Bharat through a British-made Constitution — the Government of India Act of 1919.

The author has laid out his historical analysis under three distinct sections, namely Section-I: Coloniality, Section II: Civilisation and Section III: Constitution. He has very methodically established the historical inter-linkages between these three sections.

He lays bare the deep religious objectives of Eurocentric colonialism which hitherto remained not much articulated but have had devastating effects on the pre-existing socio-cultural ethos of colonised countries. For example ‘according to decolonial thought, European coloniality gave birth to the ‘cultural complex’ of ‘modernity’ and ‘rationality’, apart from the ‘modern’ categories religion and race. Importantly, according to decolonial school, ‘postcolonialism’ gives the impression that the colonial mindset or consciousness ended with decolonialism, when in fact, it has survived decolonisation and continues to impact decolonised/ ‘independent’, ‘societies’. For Sai Deepak ‘colonisation is the process, colonialism is the policy and coloniality is mindset or the thought that underpins or drives colonialism’. Therefore, the author empathically suggests that India should have its own definitions of coloniality and decoloniality without being fettered or limited in any manner by the experience and conclusions of countries like Americas and Africa.

Further, the  author opines that the colonial education was offered not as an alternative to pre-existing indigenous form of education but with the specific objective of gradually erasing its existence. Colonial education annihilated a society’s beliefs in itself. It made the colonised people see their past as one of vast wastelands on non-achievement and it made them desirous of distancing themselves from that wasteland and instead identify with an entity that was furthest removed from the European culture. Not only did it push the colonialised natives further away from their heritage but it also undermined their self-confidence at an individual level. He questions the provincial validity of Europeanism and its false claim of universalism.  He emphasises that the rest of the world, particularly India, was not living in the Dark Ages before Pax Europaea or European Peace, and would certainly not plunge into ignorance and darkness after the demise of Pax Europaea.

With 194 pages  consisting of four chapters, this is the largest section of the book. It covers Bharat and its Coloniality and Colonial Consciousness; Bharat as a Civilisation; European Coloniality and Indic Civilisation; and Christian Colonial Consciousness, the Hindu Religion, Caste, Tribe and Education.  Bharat’s civilisational grandeur is the backdrop of this section. Bharat had reached its civilisational zenith even before many other countries in the world. Its religious churning and innovative processes are well-recorded. So also its achievements in the areas of Philosophy, Mathematics, Astronomy, Astrology, Agronomy, Ayurveda, Economics and others. Sanathana Dharma taught everyone to live in harmony with nature and understand the utility and futility of life on earth. It is these holistic achievements which made Indic Civilisation a magnetic force in the world. And lead other distant countries of the world to seek trade and educational relationship with Bharat.

By the time Europeans arrived on the Indian shores, India had already been under the ‘Islamic – Middle Eastern’ colonisation. Sai Deepak quotes exhaustively Dr. B.R. Ambedkar  [Pakistan or the Partition of India] in explaining how during the 762 years of incessant Muslim invasions Indic Civilisation underwent challenging times. As to how Bharat’s areas and its borders were truncated. And thereafter came the European coloniality. Both the colinialities posed threat to the very existence of Bharat’s indigeneity and consciousness.  The author extensively quotes from eminent historians such as Radha Kumud Mookerji and Jadunath Sarkar, to highlight the greatness of Indic Civilisation before its colonisation.

From the deliberations in the British Parliament, the author provides proofs as to how ever since  1797 when Charles Grant and others like him were obsessed with the idea of using colonial education to cure the “Hindoos” …. and darkness attributed to “Hindoo religion”. In 1811, missionary activity was pursuing the need for such a course of action ‘for the farther promoting of Christian knowledge and increase of piety and virtue …. in Popish and infidel parts of the world”. Both the houses of the British Parliament had received hundreds of petitions from British Churches fervently appealing for the ‘propagation of Christian knowledge in India.’ ‘Reformer’  Rajaram Mohan Roy’s letter to William Pitt, Lord Amherst, is an indication of  impending damage to the Indic civilisation. Roy beseeches for the introduction of English medium of education to uplift the otherwise semi-literate and illiterate population of the colony!  With the introduction of Thomas Babington Macaulay’s Minute in  1835,  English medium of education became a reality which succeeded in breaking down the long-standing  Gurukula based education system.

Even though there is some feeling that Bharat has remained un-proselytised for the most part, the author is of the opinion that there has been effective alienation of large part of Bharat from the Indic consciousness and has, in fact, turned a significant cross-section of Bharat against it.

This is the third and final section running into about 75 pages, with only two chapters dealing with Coloniality, Civilisation and Constitution; and The Standard of Civilisation, the League of Nations and the Government of India Act of 1919.

This section explains the influence of Coloniality and Christianity on Bharat’s Indic civilisation between 1797 and 1919.  ‘Sepoy Mutiny’  of 1857 was a cross-road where the Crown came out of the shadows and overtook the reign from East India Company. Passing of Government of India Act of 1919, which ultimately became the foundation stone for the Constitution of post-independence India, was an outcome of historical events narrated earlier leading to successful indoctrination and the contemporary compulsions such as war-torn Europe and the efforts to form League of Nations.  Contents of the Act 1919 were more to the liking of the coloniser than to colonised.  Bharat was turning into India.

With his Engineering Degree from Anna University and a Law Degree from IIT Kharagpur, Sai Deepak has a unique combination of qualifications. His arguments before the Supreme Court in the Shri Sabarimala Ayyappa Temple and Shri Padmanabhaswamy Temple cases have established his command over  the subject. His videos of lectures and discussions on YouTube prove his eloquence and thorough knowledge of  Indic Civilisation. And his proposition that the Constitution must be alive to history to serve its intended purpose underscores the weaknesses of India’s legal foundations.

For the past seven years, India has shown a  political transformation. Returning of a nationalistic party with penchant for Indic values with a bigger majority of its own at the centre is a proof of that. This book is a timely publication in keeping with that national fervour. This volume generates  a lot of interest in looking forward for  its sequel.

That this book is a path-breaking research work  is established by the quality of  large number of quotations and source references. In some places the reading may become a bit heavy and slow. But that is due to the nature of its subject. Price is justified by the quality of its contents.