Home » News » Boys on a joy drive cause serial accidents 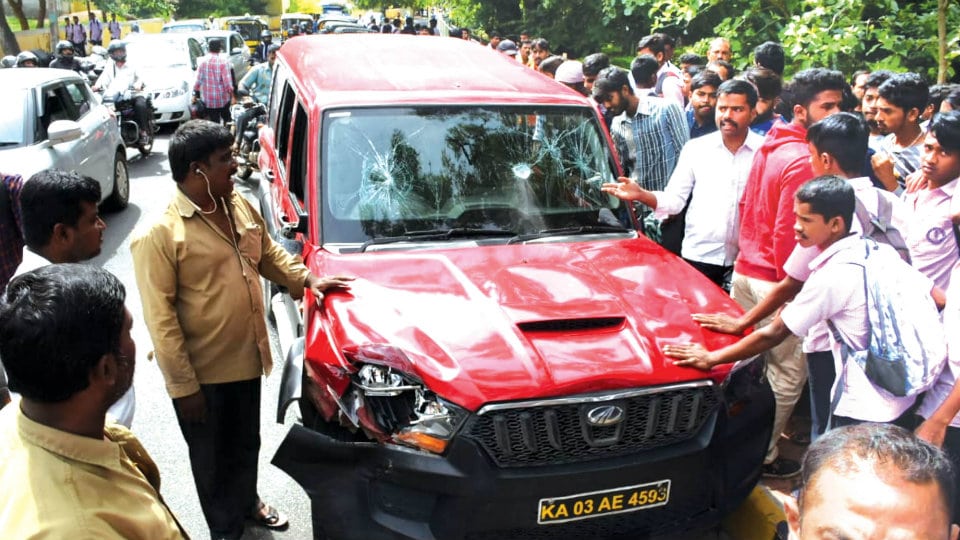 Boys on a joy drive cause serial accidents

Public thrash boys, hand them over to Police

Mysuru:  Two boys, who had taken a four-wheeler for a spin in city caused serial accidents this morning.

Details: One Manjunath of Gayathripuram, a lorry driver had taken a Mahindra Scorpio vehicle (KA-03-AE-4593) on rent from a  Self Drive Car Rental company at about 9.30 am and brought it to his house as he wanted to take his family members to a temple.

Meanwhile, Manjunath’s neighbour Anup took the key of the vehicle from Manjunath saying that he would park it to the side. Manjunath, after giving him the key, went inside the house to take bath.

But Anup, instead of parking the vehicle, drove the vehicle to Yuvaraja’s College, where he picked up his friend Raj (name changed) a minor. Raj, then sat behind the wheels of the Scorpio and proceeded further.

But Raj, who did not stop the vehicle, proceeded further and rammed into MUDA Secretary’s vehicle (KA-09-MA-1222) from behind, which was on it was to pick up the MUDA Secretary. But Raj again sped away and in the process rammed into a two-wheeler. He (Raj) then took a turn towards the Deputy Commissioner’s Office, where the public, who were following the vehicle from MUDA Circle, waylaid the vehicle, caught the duo and thrashed them. The mob damaged the vehicle before handing the duo to the Police.

It is learnt that Raj is a minor and would turn 18 this December.

K.R. Traffic Inspector Jagadish and staff, who rushed to the spot, took Raj and Anup into custody, seized the vehicle and registered a case under IPC Section 279 (Rash and negligent driving) and 338 (Causing grievous hurt by act endangering life or personal safety of others).

Meanwhile, the injured girls were rushed to K.R. Hospital, where they were provided first-aid and were later shifted to a private hospital for further treatment.