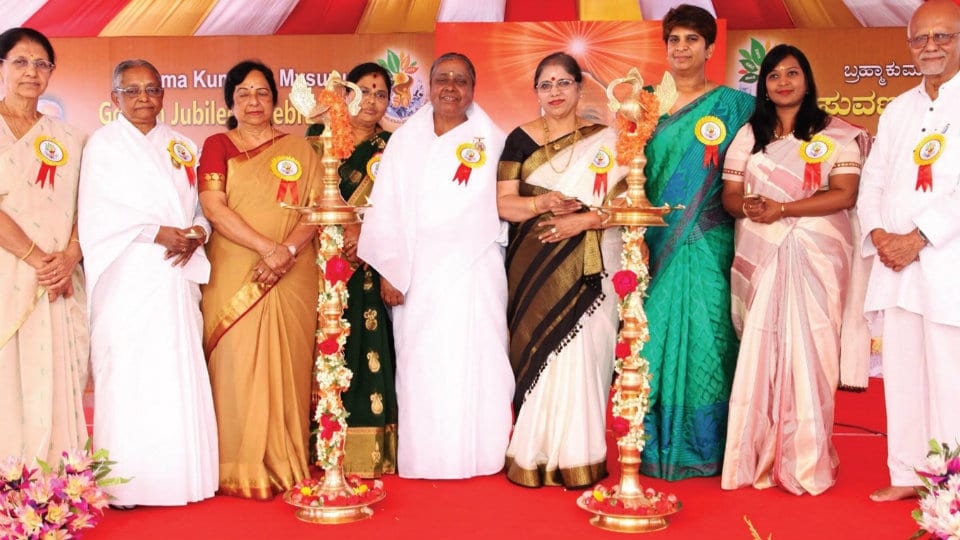 Down the Memory Lane

The 15-Day Golden Jubilee Celebrations of Brahma Kumaris Organisation of Mysore Sub Zone, organised at Maharaja College Grounds in city, which will conclude this evening, took my memory back to 50 years when Mysore Centre was started in 1966 by a young Brahma Kumari single-handedly in a modest way in a small first floor premises on Irwin Road. She is B.K. Lakshmi who had returned from Mount Abu after initiated and trained by the founder himself Brahma Baba.

Probably, it is his Blessings that gave strength to her to work vigorously to spread the Divine Spiritual message of BKs and as a first step devotees to undergo Raja Yoga with Meditation, which is the foundation for a healthy and stable mind.

Her tireless efforts over the last fifty years has seen how the Organisation has grown leaps and bounds in the Districts of Mysuru, Mandya, Chamarajanagara, Hassan, Kodagu and also a few Centres of bordering Kerala — all now called Mysuru Sub Zone headed by Rajayogini B.K. Lakshmiji.

As part of the 50th anniversary celebrations at Maharaja’s Grounds, several programmes including an attractive Spiritual Exhibition is going on and I attended the programme for women titled “Women as Saviours of Culture,” I had to address the gathering as desired by Lakshmiji. That was the occasion when my late mother M. Susheelamma  was remembered in the programme as the earliest devotee and the support she gave by starting a Centre in her house on Bamboo Bazar main road. Senior Dadijis from Mount Abu used to visit this Centre.

I also remember those days with my mother who influenced me to visit Mount Abu with her and another recent visit with Lakshmiji to take part in the 100th Birthday Celebrations of Dadiji Janakiji. One must visit this Head Centre for a Divine Spiritual experience.

Let me now heartily greet Rajayogini Brahmakumari Lakshmiji for her 50 years of yemon service in Mysuru and wish the Organisation to spread its wings further under her guidance.

Brahma Kumaris
Education to all will be my priority, says new Bishop
Mission Hospital’s mission…