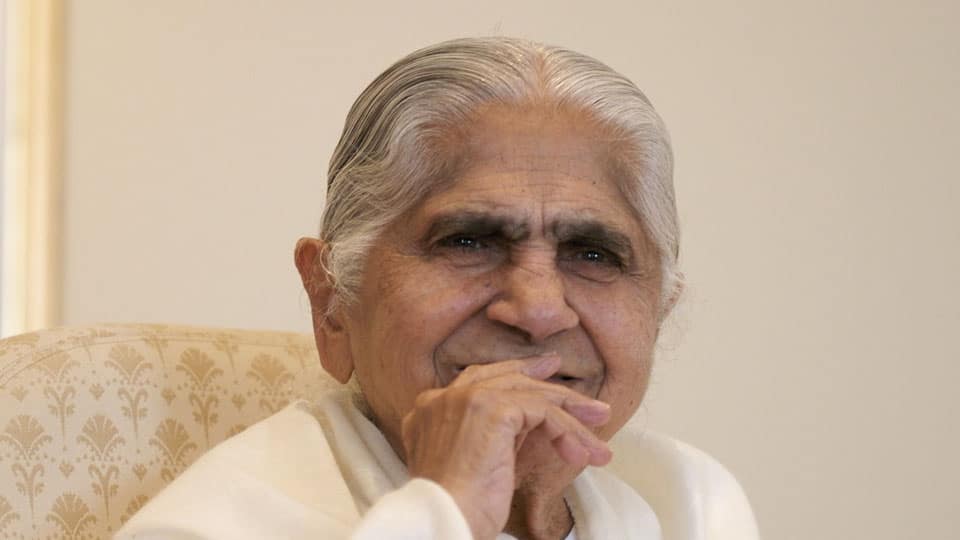 She had celebrated her 102nd birthday in Mysuru in January 2018

Dadi Jankiji, who was the brand ambassador of Swachh Bharat Mission, was suffering from respiratory and stomach-related issues for the past two months, said an official statement.

A large number of devotees paid their last respects to the departed soul at Shantivan in the premises of Brahma Kumaris headquarters. Cremation took place at 3.30 pm.

Another event titled ‘Karnataka Santa Samagama’ had been organised at Gyan Sarovar on Jan.7 by Brahma Kumaris, Mysuru Sub-Zone, in association with Suttur Mutt.

Rajyogini Dadi Jankiji had inaugurated the event where discussions were held on ‘Attaining superlative culture through the power of God.’ On the occasion, a huge cake was cut to mark the 102nd birthday of Dadi Jankiji.

Profile: Rajyogini Dadi Jankiji had dedicated more than 80 years of her life to the work of the Prajapita Brahma Kumari Ishwariya Vishwa Vidyalaya of which she was the Administrative Head. After serving throughout India in the years following independence, she moved to London, UK, in 1974 and from there her vision and drive saw the organisation’s teachings carried into more than 100 countries. She had been based back in India since August 2007, at the main headquarters in Mount Abu, Rajasthan, following the passing away of Dadi Prakashmani, the former Head.

Condoled: A large number of devotees and followers of Dadiji in Mysuru including the brothers and sisters of the organisation that has various branches in Mysuru have condoled her death.