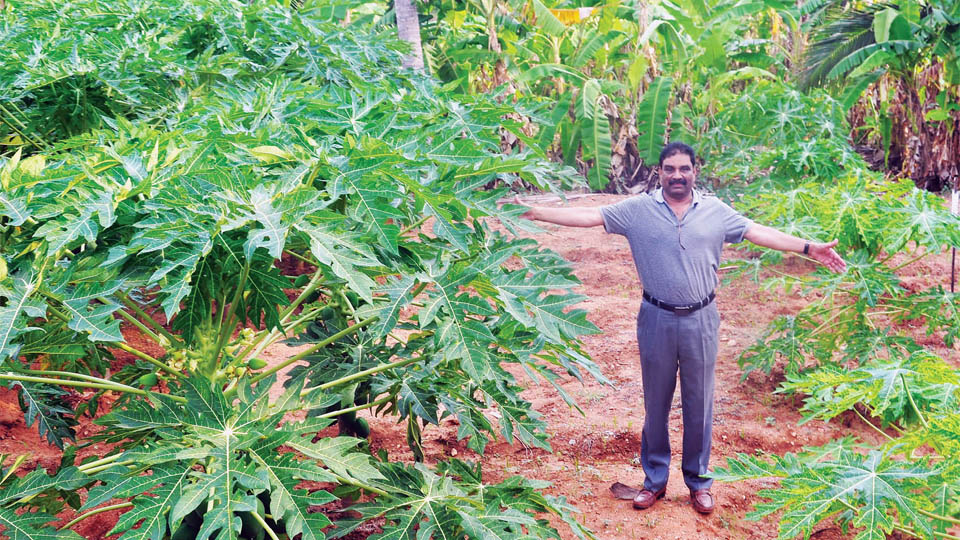 Papaya is one of the important fruit crops of India and all other papaya-growing countries. Owing to its high yield and profitability, it has become very popular among farmers in India. In addition, it contains enzyme papain and chymopapain, both of which are widely used in the food and drug.

Total annual world production is estimated at 13 million tonnes of fruits. India leads the world in papaya production contributing to over 43% of the global production, with an annual production of over 6 million MT.

Although the area under papaya cultivation in India increased by 63% from 45.2 thousand ha. in 1991-92 to 73.7 in 2001-02, neither the area under papaya nor production recorded significant increase over the recent years, mostly due to a number of limiting factors, of which Papaya Ring Spot Virus [PRSV] is the most important. The fact that the virus that was first reported from Hawaii in 1940s reached almost every papaya-growing area and the production fell to less than 50% by 2006 bears testimony to the destructive potential of the pathogen.

The affected plants become stunted and early infection leads to absolute loss due to lack of fruit production. Fruits, often malformed, exhibit bumps and characteristic ring spots. The disease also adversely affects the taste and flavour of the fruit. The virus spreads through aphids (insect vector) in an exponential rate and a few infected plants are enough to spread an entire area. Hence, once it appears in the field it becomes a nightmare to the farmers.

It is a well-known fact that there are no Viricides that kill the viruses, available anywhere in the world. Until now there is no absolute curative control measure available against this disease.

Dr. Vasanth Kumar Thimakapura, an independent Agriculture Scientist from the city, popularly known as ‘Plant Doctor’ owing to his success in developing management strategies against several ‘hard-to-control’ diseases, has developed a plant based eco-friendly formulation, which provides sustained protection against the dreaded virus throughout the crop cycle of two years.

The product (POWER PLUS) is both preventive and curative in nature that provides the only solution to the papaya growers to reap profitable harvests in spite of PRSV infection at any stage of the crop.

The efficacy of the product is demonstrated beyond doubt in his experimental plot where several papaya plants with PRSV infection are maintained alongside the treated healthy plants with abundant fruiting, in a situation where a single plant is sufficient to affect the entire population.

The Virus has the potential to create disastrous epidemics. At a time when there is neither a variety of papaya that is resistant to the virus nor a viricide and a foolproof protection measure, the product has come as a boon to the farming community. Further, this product is non-toxic and can cure varieties of viruses in crops like beans, tomatoes, cucumbers, orchids, etc.

The technology after five years of verification at the experimental plot and farmers’ fields is now ready for wider adoption. The results have withstood the scrutiny of several academicians and scientists from the conventional Universities, Agriculture and Horticulture Universities and National institutes, have evinced keen interest in his work and visited his demonstration plot.

Those who would like to visit the demonstration plot can visit the Bhoodevi Farm, Paduvaralli, Hunsur Road, Mysuru.