Home » News » Markets on the move 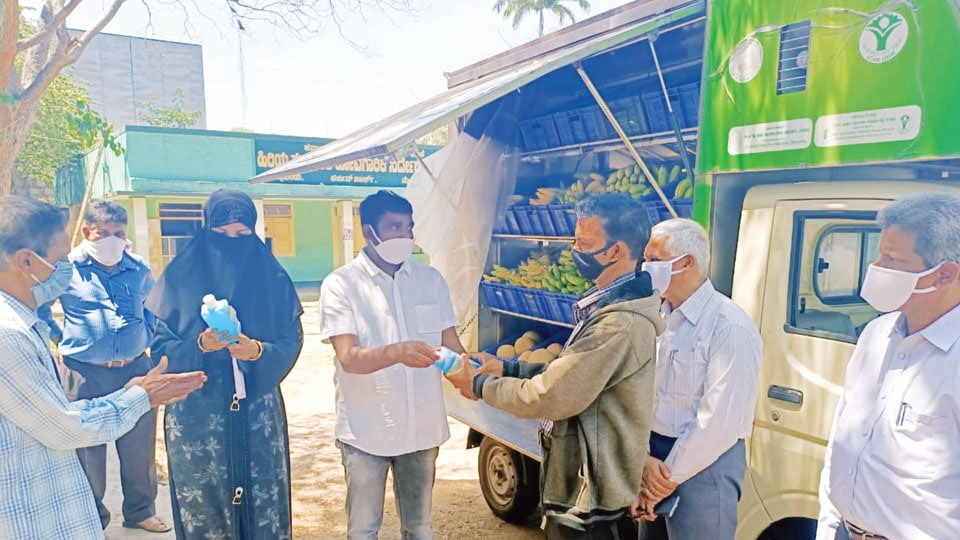 Markets on the move

Mysore/Mysuru: To prevent rush at vegetable and fruit shops and also to prevent people from straying out of their houses, the Mysuru City Corporation (MCC) has begun selling vegetables and fruits at the doorsteps since yesterday.

Mayor Tasneem and Deputy Mayor C. Sridhar flagged off vehicles which will go around the city throughout the day selling fruits and vegetables.

Agreement with farmers: As farmers could not sell their produce directly to HOPCOMS due to technical impediment, only two-three vehicles were deployed to sell fruits and vegetables yesterday.

Today, the technicalities were resolved and farmers could sell vegetables to HOPCOMS, sources said. Once vegetables and fruits are procured from farmers, more vehicles would be deployed to sell the agri produce, sources added.

Explaining about the initiative to MLA L. Nagendra during a meeting held at the MCC’s Old Council Hall yesterday, MCC Commissioner Gurudatta Hegde said that talks were held with HOPCOMS to sell vegetables and fruits at the doorsteps in all areas.

He said that from today (Apr. 1), 25 vehicles would be moving around in various localities and sell fruits and vegetables. A request in this regard was made to the Police Department, which has assured of deploying a Home Guard to each vehicle, the MCC Commissioner added.

Stating that the responsibility of this initiative has been given to the MCC City Planning Joint Director and Superintending Engineer, Gurudatta Hegde said that the delivery of vegetables and fruits would be done as per a designated route map.

MLA Nagendra said that officials should be prepared to deliver groceries to every house that can last for two months.

Stating that there were complaints that some Fair Price Shops were not providing rations, Nagendra asked Hegde   to instruct Joint Director of the Food and Civil Supplies Department to provide rations without imposing any conditions to BPL and APL Card holders.