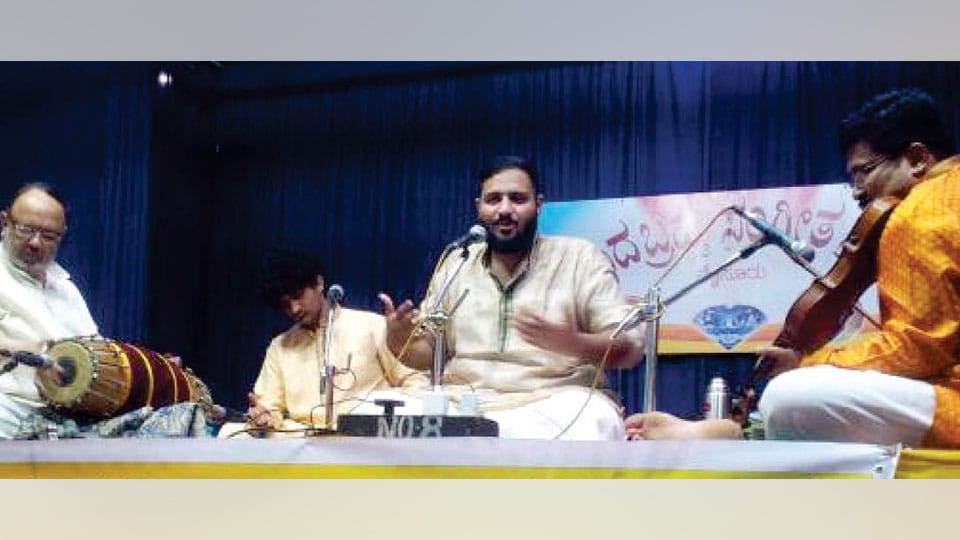 Vighnesh Ishwar is one of those young talented musicians who have pursued music seriously, trying to create awareness in music among everyone through their brilliant performances. He performed for Sri Nadabrahma Sangeetha Sabha, Mysuru, on the 8th of this month with Mathur Srinidhi on violin, Anoor Ananta Krishna Sharma on mridanga and Pranav Datt on morching.

The very beginning of the concert was a rare and impressive varna by T.R. Subramanyam in Behag — ‘Vanajaksha’ in Adi tala. The immediately next piece — ‘Shankari Shankuru Chandramukhi’ in Saveri was taken up for detailed rendering.

Mysore Vasudevachar’s ‘Mama hrdaye vihara dayalo Krishna’ evoked good feeling. ‘Jamboopate maam paahi’ in Yamuna Kalyani was very similar to its rendition by the vocalist’s Guru T.M. Krishna. ‘Padavi nee’ in Salaga Bhairavi by Tyagaraja was in good speed for a filler. Shankarabharana was handled with brilliance and the neraval at ‘Mooladharaja’ in Sri Tyagaraja’s ‘Swara Raga Sudha Rasayuta Bhakti’, tightly packed with Trikala sangatis and swaras, with ease and excellence. The bhava experienced in Shemmangudi Srinivasa Iyer’s music can be seen in Vighnesh’s raga elaboration and Kriti rendition. Mathur Srinidhi’s engaging responses on violin were also pleasing. Senior mridangist Anoor Anantakrishna Sharma was in perfect alignment with the vocalist’s theme. And his taniyavartanam with Pranav Datt was elegant                         and skilful.