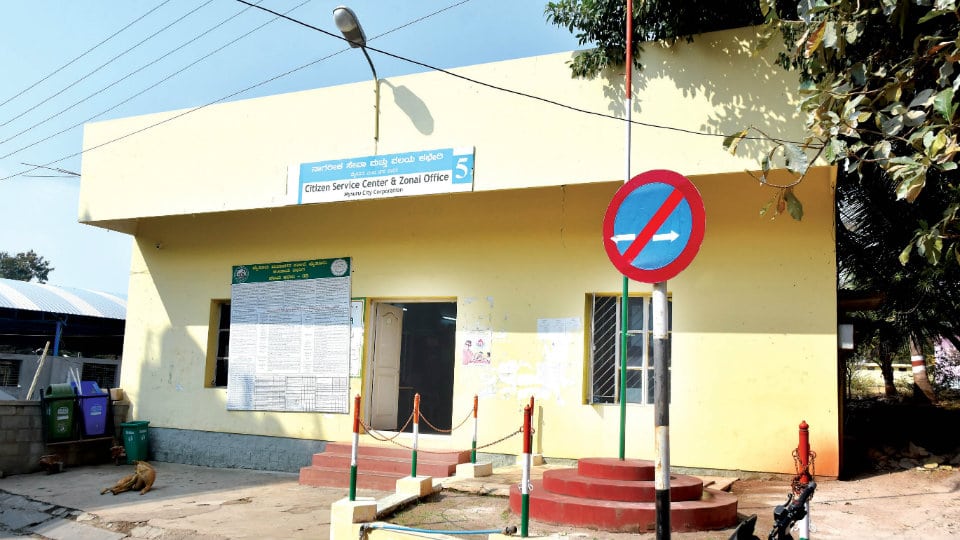 Mysore/Mysuru: Mysuru City Corporation (MCC) and Mysuru Urban Development Authority (MUDA) officials often wax eloquent on maintaining transparency in their functioning. But the ground reality is different as brokers and middlemen dominate in the two important Government bodies and many people are forced to approach the brokers, thanks to the nonchalant attitude of officials.

Citizens have been complaining that they are forced to contact middlemen as the authorities unnecessarily make them run from pillar to post to avail services, getting documents and payment of taxes. It has become a common sight for citizens to look to brokers for property tax remittance, tax stipulation, Khata registration, Khata transfer, plan approval, birth and death certificates etc.

The menace of middlemen is not limited to just MCC Zonal offices and MUDA. Other Government offices such as Revenue Department, RTO, Sub-Registrar’s office and PWD offices too are no different as middlemen and agents are widely encouraged.

There are allegations that MUDA officials are allotting CA (Civic Amenities) sites in MUDA and Private layouts in an unauthorised manner and issuing Khatas, besides stipulating tax. The officials are alleged to have issued Khatas to CA sites in Hebbal, Vijayanagar, J.P. Nagar and other residential layouts.

Amidst all this, there are complaints that MUDA officials are issuing Khatas and also approving building plans and issuing Completion Reports (CR) based on fabricated documents. Following complaints of rampant irregularities, MUDA had cancelled site allotments made on fake documents and had also lodged a Police complaint seeking action against those involved in illegalities. But as MUDA failed to submit the necessary records during Court trials, MUDA lost out on many of its sites that were grabbed by unscrupulous persons who produced fake documents.

MCC Revenue Officer Kumar Nayak said that a case has been registered at Metagalli Police Station against four persons who have cheated the civic body of taxes.

Admitting that the MCC has received complaints on some middlemen cheating the MCC after collecting higher money from property owners, he said that a complaint has been lodged at Metagalli Police Station.

He further said that the proposed introduction of online property tax payment from the current year will largely help to prevent property tax evasion.