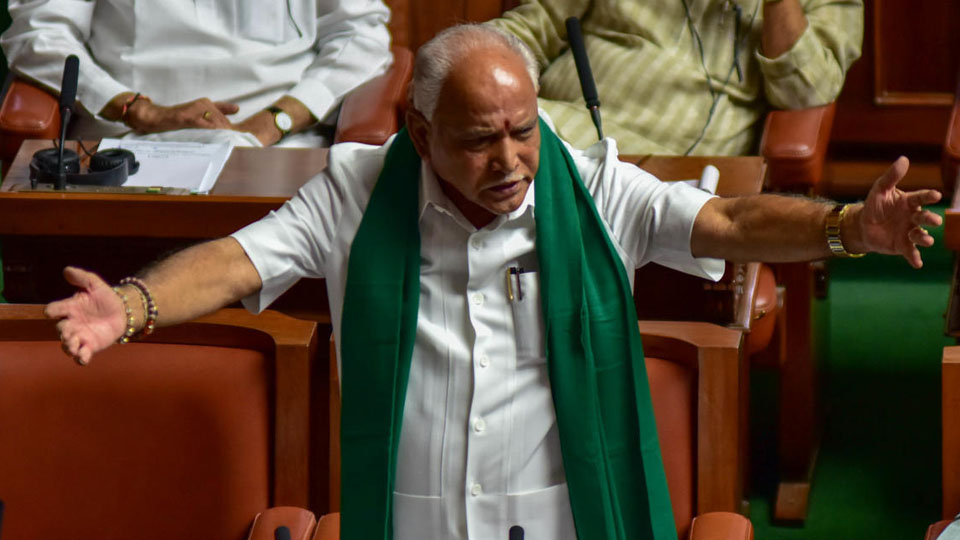 Bengaluru: In an aggressive speech against the Janata Dal (S) – Congress coalition Government before the Trust Vote yesterday, Leader of the Opposition B.S. Yeddyurappa (BSY) targeted “father and son” (Chief Minister H.D. Kumaraswamy and the former Prime Minister H.D. Deve Gowda) while predicting that the alliance will end up “discrediting the Congress.”

He claimed Gowda had written hundreds of letters to him and exerted pressure to get works done in favour of the family. On Kumaraswamy’s claim that his father was pained by the JD(S)-BJP alliance back then, Yeddyurappa shot back: “If your father was pained by your alliance with the BJP, why did you continue in the coalition for 20 months?”

“I am feeling guilty now because of the support given to the Kumaraswamy government in 2006,” said the BJP leader, who stepped down earlier this week as the CM, two days after assuming office.

Yeddyurappa alleged that Kumaraswamy granted 22 mining licences. “Corruption during the JD(S) Government will continue,” the BJP leader said, and expressed his readiness to prove his charges against the Gowda family with documents.

Largely targeting the JD(S) during his 45-minute speech, the former CM said: “You (Congress) may not have got the people’s mandate. But the Congress High Command calls only Kumaraswamy to Delhi and none of the State leaders. They (JD-S and Congress High Command) took all the decisions. I have decided not to speak against the Congress leaders. From now, our struggle will be against the corrupt father-son duo,” BSY said.

“Why didn’t the Congress try to keep the CM’s post? In a few months, the father-son duo will make people forget the name of the Congress,” he said. The former CM Siddharamaiah has been “totally sidelined” in this govt. formation, he claimed.

3 COMMENTS ON THIS POST To “BSY targets ‘father and son’”