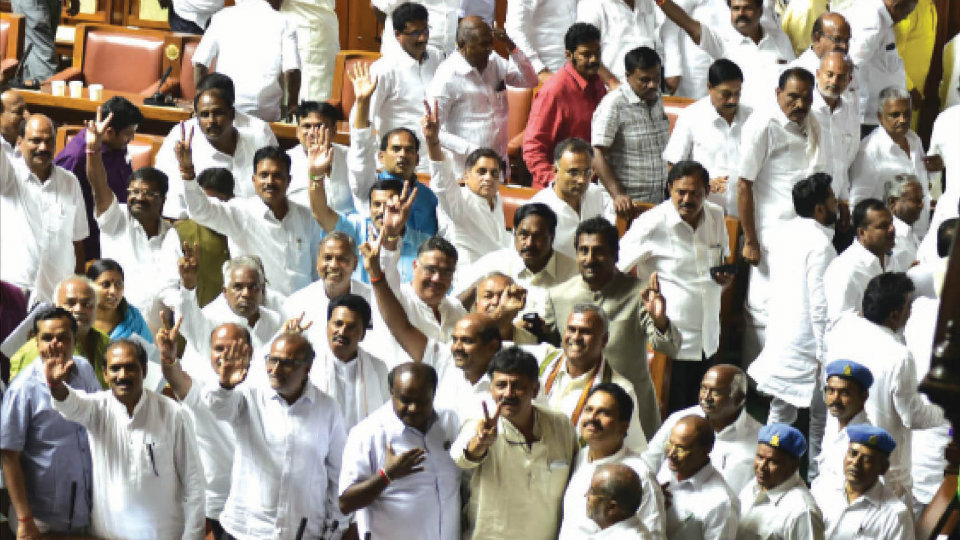 HDK wins Trust Vote with 116 MLAs as BJP walks out

Bengaluru: Putting an end to the prolonged, yet high-voltage political drama in Karnataka 10 days since the declaration of election results, the three-day old H.D. Kumaraswamy (HDK) government yesterday won the vote of confidence in the Legislative Assembly amid a walkout by the BJP MLAs.

With 37 JD(S) MLAs, 78 Congress MLAs and support of a few others, the JD(S)-Congress’ post-poll alliance managed to sail through the Trust Vote as the House looked half empty with no BJP MLA present.

It turned out to be a smooth sailing for the 58-year-old Kumaraswamy as BJP members trooped out of the House after Leader of Opposition B.S. Yeddyurappa’s blistering attack on the “unholy” JD(S)- Congress coalition.

Kumaraswamy’s motion seeking the confidence vote was declared passed by voice vote by Speaker K.R. Ramesh Kumar as the new CM declared the walkout to be “escapism.”

Kumaraswamy asserted that the Congress-JD(S) coalition Government would complete its five-year tenure.

He said that he was conscious that he was not running a majority government but promised “a new kind” of coalition Government that would become a model for the country. “You (BJP) may be feeling that this Government will go in two or three months, it will not go in two months or one month, but will stay with stability for five years,” Kumaraswamy said.

Kumaraswamy also expressed his regret for not being able to assume the Chief Minister’s post with the complete trust of the people. Promising to continue the popular schemes of Congress Government, Kumaraswamy said that the Government would not only be stable, but would protect the interests of everyone and provide an honest and good administration.

Kumaraswamy’s speech was largely dedicated to explaining the circumstances under which he had a truck with the BJP back in 2006 and arguing that his present alliance with the Congress was aimed at clearing that “blemish.”

In a repentant mood, he said, “I was still a novice in politics in 2006. I am still guilty of taking political decisions that hurt my father (H.D. Deve Gowda).” The Chief Minister said that he too contributed to the emergence of the BJP in Karnataka, which the BJP leaders called “gateway of the South.”

He described the formation of the coalition Government with the Congress as an attempt at clearing the “blemish” that his father had to suffer because of his decision to join hands with the “communal BJP” in 2006.

Defending his decision on breaking the alliance with the Congress in 2006, he said the JD(S)-BJP alliance was formed in 2006 to save the party in those political circumstances.