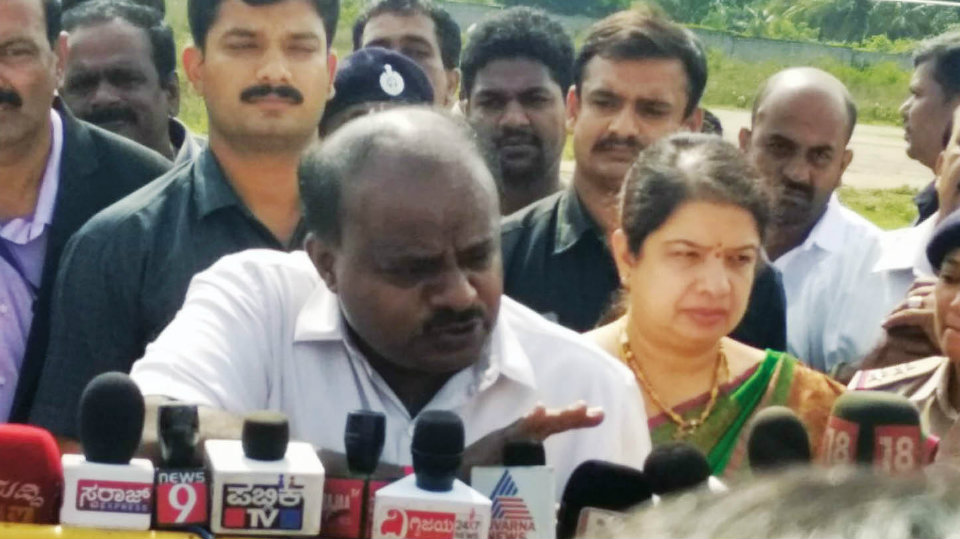 Hassan/Bengaluru: – With the swearing-in ceremony set for May 23, Chief Minister-designate and JD(S) State President H.D. Kumaraswamy (HDK) visited his home district of Hassan this morning ahead of his meeting with AICC President Rahul Gandhi, Congress Supremo Sonia Gandhi and BSP Chief Mayawati in New Delhi later this afternoon.

HDK, accompanied by his wife Anitha and MLA-brother H.D. Revanna, landed at Holenarsipur in Hassan district in a special chopper, his first visit to his home district after being named as the CM-designate.

Speaking to press persons, he said that he had come to his native district to seek divine blessings. Asserting that he would lead the Congress-JD(S) coalition government for the full term of the Assembly, he said that he was leaving for Delhi this afternoon to meet Rahul Gandhi, Sonia Gandhi and Mayawati.

Admitting that leading a coalition government without any hitches was a big challenge, Kumaraswamy, referring to BJP leader B. Sriramulu’s remark that he would not let the government sleep, reacted that nobody can prevent him (HDK) from sleeping.

Later, HDK began his temple run by visiting Lakshminarasimhaswamy temple and Shiva temple at his native village Haradanahalli in Holenarsipur taluk and then Mavinakere Ranganatha temple.

The CM-designate later flew back to Bengaluru from where he left for New Delhi by a special flight, where he is scheduled to meet Rahul Gandhi at the latter’s Tughlaq Road residence at 2.30 pm, followed by a meeting with Sonia Gandhi at 10 Janpath during which he will discuss trust vote and Cabinet formation, besides inviting the two leaders for his swearing-in ceremony scheduled to take place in front of Vidhana Soudha at Bengaluru in the forenoon of May 23 (Wednesday).

Later in the day, Kumaraswamy is also scheduled to meet BSP Supremo, the party which the JD(S) had entered into a pre-poll alliance, SP leaders Mulayam Singh Yadav, Akhilesh Yadav and a host of other political leaders.

CLP meeting concludes without any decision

Even as Kumaraswamy was headed to Delhi, the Congress convened an emergency meeting of its Legislature Party (CLP) this afternoon at Hilton Hotel in Bengaluru, where the party legislators are staying after their return from Hyderabad.

The meeting is said to have concluded without any decisions being taken.

Meanwhile, hectic preparations are underway in front of Vidhana Soudha for Kumaraswamy’s swearing in ceremony. Several bureaucrats and officials visited the venue to take stock of the preparations, even as workers were busy erecting shamiyanas, pandals etc., for the mega event. Thousands of people are expected to throng the venue on Wednesday (May 23) for the swearing-in ceremony.

The ceremony will see only Kumaraswamy taking oath as the Chief Minister from Governor Vajubhai R. Vala. No others will be sworn-in as the Cabinet is yet to be finalised, it is learnt.