Rains cause more damage in Mysuru

Mysuru: It is raining relentlessly in the city since the past few days and it was no different yesterday as it began to rain at around 4 pm. As a result, many trees and branches in different parts fell on vehicles damaging them, throwing normal life out of gear and traffic being disrupted.

It rained for more than one hour and later it continued to drizzle late into the night. A branch of a tree fell on a car with Tamil Nadu Registration number (TN74 AD3481) parked near Anjaneyaswamy Temple in Vontikoppal, damaging it.

Meanwhile, Karnataka Rakshana Vedike District President and BJP leader K. Madesh alleged that in spite of bringing to the notice of the officials concerned that many trees and branches are dead and weak on Valmiki Road and they have to be removed, no action had been taken.

Also a branch of a tree in front of the Judge’s Quarters on Valmiki Road fell on the electric pole and the wires snapped. As the power went off, no untoward incident occurred.

The branches of trees in Yadavagiri, near Deaf and Dumb School in Tilak Nagar, Mathrumandali Circle, Vani Vilas Water Works and many other areas have fallen to the ground. The moment Abhaya team of MCC received the information they reached the spot and cleared the fallen branches. 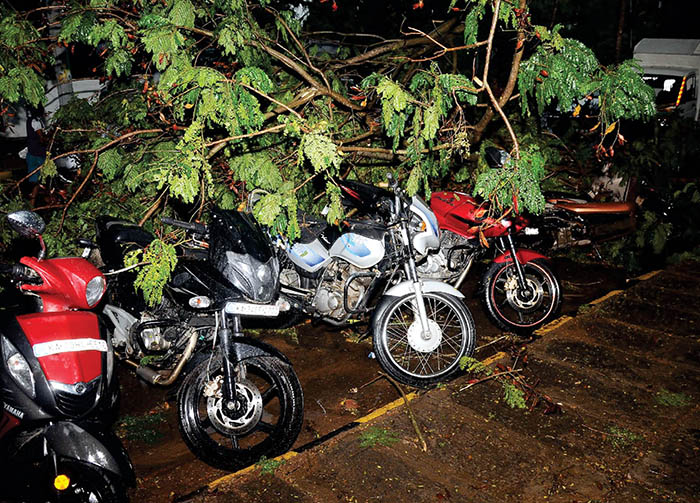 Since the rain began in the evening, many office-goers reached home late, while those who had to catch buses from Suburban and City Bus stands found it difficult to reach home.

The school children were seen skipping and jumping on puddles of water, enjoying themselves. The roadside vendors business was affected due to the steady drizzle.

Power cut: Many areas in the city were plunged into darkness as the power went off and was not restored for a long time. A few of them also cursed that because of the power cut they could not watch the IPL match between Sunrisers Hyderabad and Kolkata Knight Riders.

The Mysuru Control Room officials told Star of Mysore that the rainfall in Nanjangud and Hunsur had not been reported.