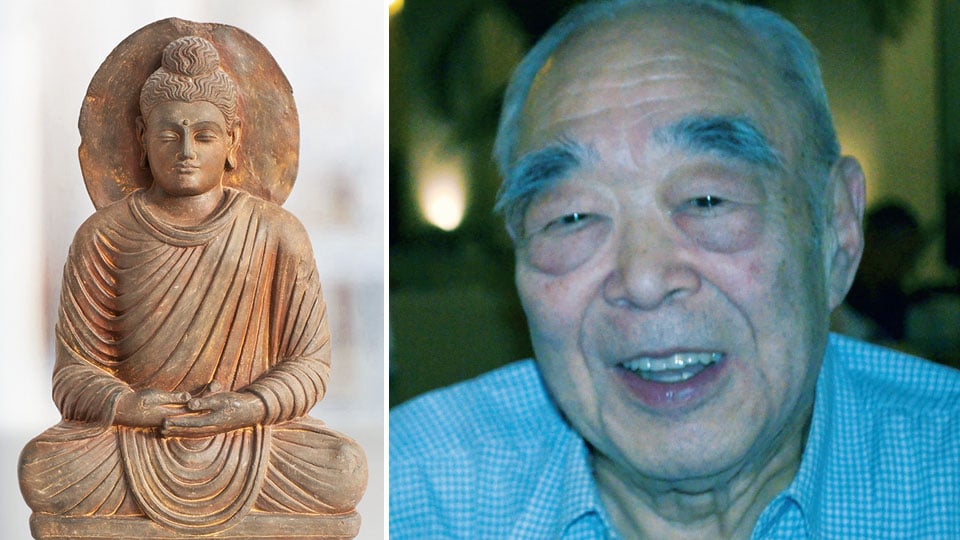 “Buddha has more influence on Japan than India” – 1

Swami Vivekananda’s love for Japan is well-known. He had said, “I would wish that everyone of our young men could visit Japan once at least in his lifetime to see how Japanese talk and work more unlike Indians.” To this ilk belongs Dr. Hiroya Fujisaki Professor-Emeritus at the University of Tokyo and a Professor in the Department of Applied Electronics at the Science University of Tokyo. He was on a visit to All India Institute of Speech and Hearing (AIISH) in Mysuru recently to deliver a series of lectures.

Star of Mysore Features Editor N. Niranjan Nikam met the genial, soft spoken, Dr. Fujisaki, 87, at Hotel Metropole, where he spoke candidly for nearly an hour about how he had come to AIISH for the first time to learn, his understanding about speech science, his work on information retrieval system which was picked up by Google, on traffic flow and his views about Americans and their morality. — Editor

Star of Mysore (SOM): You were a Professor of Speech Science at the University of Tokyo. What is this speech science?

Dr. Hiroya Fujisaki: Let me explain, my main appointment is as professor of electronics, but by chance I was invited for parallel or adjunct position. The Medical School invited me as it had a special research centre for Logopedics and Phonetics established in mid-1960s may be something parallel to All India Institute of Speech and Hearing here but much smaller in scale.

It was founded with great effort by Physicist-Linguist Prof. Fujimura, who persuaded his medical colleagues to establish a special institute for Logopedics and Phonetics that had a very high standard. He initiated this unique research institute but did not continue. He left for Bell Lab, unfortunately, he died just six months ago. Fujimura and I happen to be at MIT in the US at the same time. I was asked to take over his responsibility that was the Chair of Speech Science. But I did not want to move completely away from my department because that was my main appointment.

But they wanted somebody with my background as both Fujimura and I were from MIT in this inter-disciplinary area. So I held his position for quite some time. If I moved from my engineering school to medical school, I would lose my engineering and electronic students who in a way are far better. Of course, medical students are also good in their own way. Another reason is I would have lost touch with the industries with whom I was working. So I held that position for a few years. Even after that I kept collaboration with the medical field. The reason I was invited to take up this temporary position was because I myself was devoted not only in engineering but by science side of speech.

READ ALSO  “Like any other Indian, I thought AIDS will never come to India” - 2

SOM: What is this science side of speech?

Dr. Hiroya Fujisaki: Basic scientific study of human speech. It is not only the engineering side but from science view, it is very deeply related to Physiology and even Psychology. You can say linguistic psychology and physiology. Linguistics is more one sided, it only looks at language or sound but not the human side. Phonetics also does not look at human but only sound and language code. But speech science looks at human behaviour, how they use speech, how they produce, perceive and understand speech as a human medium. But I think this analogy is also shared by people at AIISH as they are partially Phoneticians and Physiologists, Audiologists but their main concern is human spoken language. By the way spoken language is my preferred term because speech has rather superficial connotation.

SOM: Yours is a very difficult subject for ordinary people to understand. For instance your work on mathematical and physical modelling has led to the development of models of language use. Can you briefly state what this is about?

Dr. Hiroya Fujisaki: Linguist was more primarily concerned with language or speech as it is, not so much with human as its user. Recently of course Linguists have also started looking at human as a user but their main concern is don’t look at human but speech and language. But Psychologists had to look at how human mind uses language. That is again to understand human language behaviour one has to know language as it is called but also human as its language user. It was Psycho-Linguists who started identifying this difference. You have to distinguish language as a tool and language used as a mind. If you look very deeply you cannot disregard human mind with users’ language, while traditional linguists avoid to look into human mind. This was started just about half a century ago. We need more integrated view of how human perceives language. It is psychological as well as signalling problem. In that case you have to know not only language as separate from human mind but also look and formulate how human mind uses language both in utterance and comprehension. This is not really a established discipline, so approach is very much inter-disciplinary and hence you have to have psychological and linguistic point of view as well as communication-theoretical point of view. Very often linguists do not really consider language as a tool of communication, it is more a separate entity. It is a communication of one mind with another mind. It is change of information from one mind to another through speech or text through physically observable signal.

SOM: Another, successful project you led is the Japanese National Project on Information Retrieval through Human-Machine Spoken Dialogue. Can you throw some light on this project and its outcome?

Dr. Hiroya Fujisaki: That was many years ago round the year 2000. But I was responsible to lead this national project. Now it is very common to use information retrieval system for information query. That was before Google people started and our approach was very open. I think Google uses many of our findings as there is nothing secret about it. The point is don’t search for anything available but search according to priority. So estimate the degree of relevance for the information. If you have an expensive search then anything can be found, But if you give all the retrieved items then it is too much noise. Hence, you have to have automatic way of evaluating or estimating which is most relevant then prioritise all of them according to degree of relevance. Finally it is the human judgement. System might retrieve much information that might be junk. Systematising intelligent way of determining not estimating the relevance of information and highly relevant information and that was my original work which was incorporated in this information retrieval project. In that particular project I worked deeply to construct a model of user mind and system mind interacting with each other to conduct an intelligent and efficient dialogue.

Another important thing which many do not know is, how one should not use key word but use of key concept because key word is superficial. What you really want to search is not word but concept which is important. But since it is very difficult, people find key words all the time. But more than thirty years ago I talked about what is important is not key word but key concept. Very few people speak about key concept. That requires higher degree of natural learning process. In information retrieval what we need to retrieve is some concept that is relevant. These are all my original ideas.

SOM: It is interesting to see that you have developed a model of road traffic flow which has been applied to road traffic control since the 1970s. In a chaotic country like ours where hardly anyone follows road rules, what do you think is the solution to make people follow them?

Dr. Hiroya Fujisaki: It is even used in Metropolitan traffic control in Tokyo now. There is no other theory. This is still done by traffic lights. Very few people can violate red lights, they have to stop. If they violate fine them. Here there is no fine I think.