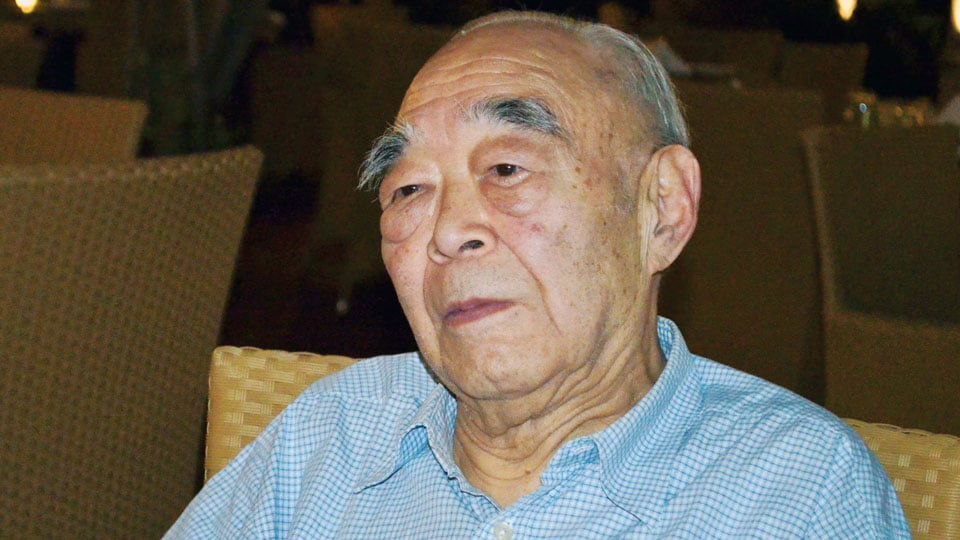 “Buddha has more influence on Japan than India” -2

Dr. Hiroya Fujisaki: Japanese are more law-abiding people. Also major cities have lot of traffic lights, may be too much. But all the lights are installed through this mathematical theory to minimise loss (which means more stops there is time loss) or maximise flow efficiency. Strangely enough you can use electrical circuit theory. Electricity flows most efficiently through network. Many people thought, it is stupid, car does not follow like electricity. There is no network theory for road traffic. If you look at each electron and their behaviour it is very sporadic. I am an electrical engineer. Only if you look at the flow of electron in a macroscopic way then electricity flows very nicely. It governs how electricity flows throw a network. It is the same thing with the car. Each of them behaves randomly. They may roll, stop, they may not follow even traffic light. But in the macroscopic way it is still the flow of traffic and the same network theory applies. It is the only macroscopic model of road traffic that applies and electrical network theory provides guidance.  That is my early work but still I took it seriously and it got a paper award from Academic Society. It is still working because there is no other theory. However, there are exceptions. If the Emperor comes then we have to give the right of way or when the foreign President comes then we have to stop the traffic (laughs).

SOM: What is the kind of work International Science Community Association (ISCA) is doing of which you are an honorary member and received the medal for Exceptional Service in 2015?

Dr. Hiroya Fujisaki: It is International Speech Communication Association (ISCA) and not Science Community. ISCA is quite ambiguous. It is an academic group of speech scientists and engineers. Now there are 2,000 to 3,000 members and it was started in Europe as ESCA. They started having biannual conference since 1989 called European Speech Technology conference and this was funded by European Union and so that has to be ESCA. I was already very early in the board. It was primarily controlled by ESCA because money comes from there and there is nothing wrong in it. At the same time I established International Conference on Spoken Language Processing (ICSLP).

In the year 2000, exactly ten years after my establishment of ICSLP, we decided to name our conference as Inter-Speech, while their conference was Euro-Speech. One thing I did not like is they had the Constitution saying the board member should be a resident of Europe. Somehow they didn’t make it open. At the time of merger that was the single issue I fought, as it was not fair. So I told them unless you change the Constitution to make it equally international we will not merge. They realised it was not a good thing to conceal European dominance. At the end of 1999 they decided to make their ESCA into ISCA. So we decided to change the Constitution so that the board member can come from any part of the world. We decided that no single country can have more than three board members. I became one of the first non-European board members.

SOM: So you had to fight a lot to get the recognition?

Dr. Hiroya Fujisaki: No we did not have to fight a lot. This is a better idea! This year it is happening in India for the first time at Hyderabad from Sept.3 to 7. After the founding of ISCA now we have an Indian Board Member Prof. Hema Murthy from IIT Chennai.

SOM: Having seen both Japanese and Indian Universities what are the similarities and differences you find?

I am only involved with research collaboration in India and the most long-standing collaboration was rather recent with Kolkata’s C-DAC (Centre for Development of Advanced Computing). But I am also involved with Jadavpur University and Indian Statistical Institute and with IIT Kharagpur, the first IIT in India. I am associated with Prof. Yagnanarayan from IIT Chennai, one of the pioneers in the country in speech science, as he works with only coding and communication, the technology part. In a way I should say he is more narrow. I like to look at every aspect, Physiology, Psychology because it is integrated science and if you have to know what is happening then you have to know every branch. 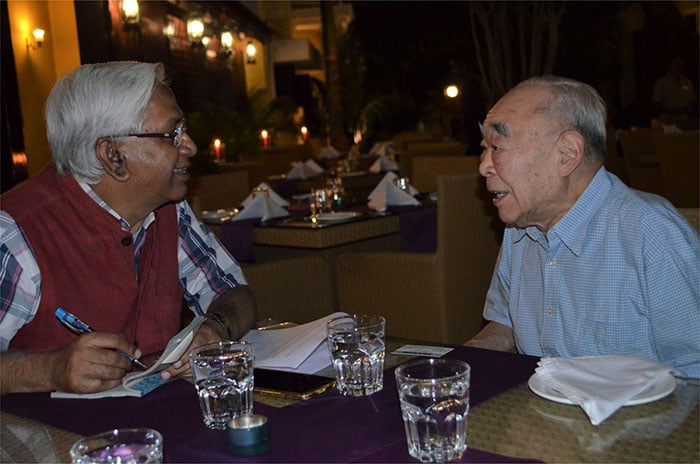 SOM: What is your view about the All India Institute of Speech and Hearing and its service to people with speech and hearing impairment?

Dr. Hiroya Fujisaki: This is my first visit to AIISH, I did not know anything about it and that is one of the reasons I wanted to come and learn. I was very much impressed. There are institutions that may have similar aspirations but smaller in size, to look into basic side of human speech use but also pathological and pedagogical use. For instance the Research Institute of Lopopedics and Phonetics did have a very pioneering role in looking into speech pathology and also physiology but it stopped existence in University of Tokyo, which discouraged it. The earlier work is very good and pioneering.

But in AIISH there are so many people, so many programmes, it is well-funded with many dedicated people and many buildings and even it teaches Genetics and so forth. So I am here very much to learn.

SOM: We hear so much about Japanese discipline, way of life and punctuality. How were these attributes ingrained in the people of the country?

Dr. Hiroya Fujisaki: I don’t know really. It might have partially come from a kind of strict feudalism and strict abidance to social rules and morals and each individual’s merit and your life is better by being law-abiding. It is quite different from American way. I do not know about Indian way. We have a religion but not very strict, but people are more law-abiding and also try to be less aggressive and that comes from Buddhism. Buddha is a great teacher. I am a Buddhist but not very deep one. It controls people’s thinking and their way of behaviour and it is a very kind religion.

I did comparative study of Christianity, Islam and Buddhism. In Buddhism, out of Ten Commandments, number one command is ‘never kill.’ In Christianity, ‘I am the only God’ that is number one. In Islam, they have a rule about prohibiting murder. But in Koran there is a condition, never kill unless you find a good reason. And everybody can find a good reason; I can kill this bad guy because I have good reason. Well I think people speak very little about this but I think in Japan society by far there is the lowest crime rate. At least part of it comes from good teachings of Buddha. So your teacher Buddha has more influence on Japan rather than India (laughs). Of course, young Indians are more Americanised and I can say openly Americans are morally low.

SOM: But Buddhist influence is about 2,000 years old and it has always been there?

Dr. Hiroya Fujisaki: Yes, of course. Before this major reforms, during 300 years of feudal reign of Tokugawa shogunate, he had a stronghold on the people. He was the single Maharaja (laughs). Emperor was there more like spiritual head. It was military feudalism and he was the only strong government but there was no war. Everybody was discouraged to carry weapons. So by not carrying weapons and law-abiding citizens, society is very safe. There may still be some theft but very small and theft and other bad things were highly penalised.

Tokugawa was more nobles-oblige (a French concept) where all men should behave morally, which is widespread in Japan. When foreign missionaries came they were surprised to see that high moral is there not only among the richer class but also among poorer classes. For instance when they see foreigners they bow and so forth.

SOM: Two incidents happened during World War II, the bombing of Hiroshima and Nagasaki. You were there then. What was your experience like?

Dr. Hiroya Fujisaki: Yes what to do. I was not living there but six hours or 700 miles away from there. But before Hiroshima and Nagasaki happened, I was living in Tokyo and it went through major bombing five times and the entire city burned. Of course, atomic bomb was the worst but bombing in Tokyo killed a few millions.

SOM: But nobody talks about this?

Dr. Hiroya Fujisaki: Well, of course, they dropped incendiary and the entire inside of the country was burnt. That is how war happens. But Japanese are very docile people. Once defeated they never complained. They don’t complain even about atomic bombing. They don’t protest against Americans. We only protested against use of atomic bomb. There is a monument in both the places but there is no single hate word against America. The plaques only say use of atomic bomb is a sin against human race but never openly blamed America. We shall never repeat again the use of atomic bomb, we said, even though we are the victims.