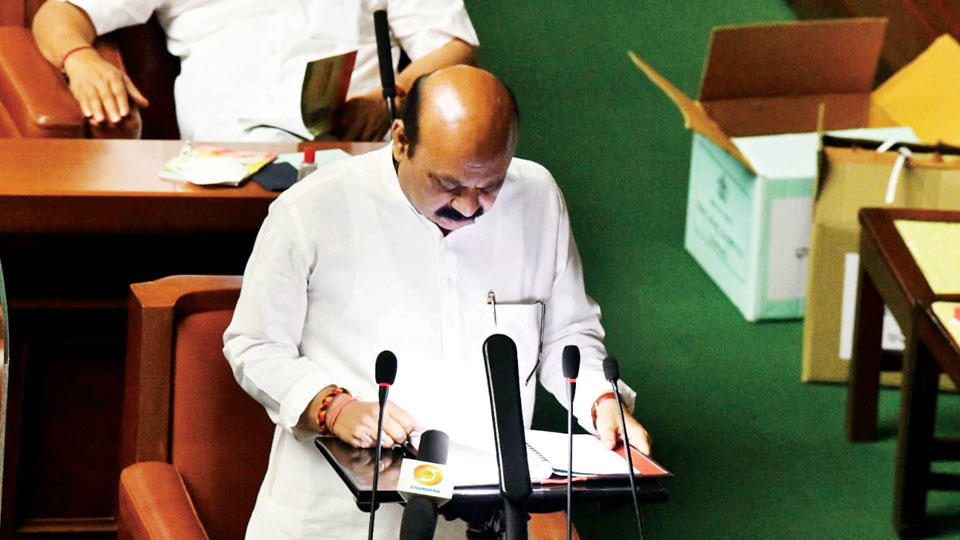 Bengaluru: The Budget Session of Karnataka Legislature began today with Chief Minister Basavaraj Bommai, who also holds the Finance portfolio, presenting his maiden budget on the first day at 12.30 pm. It is a bounty for Mysuru and Bommai announced a slew of projects.

The CM chaired a Cabinet meeting prior to the presentation where the State Budget 2022-23 was approved. This is likely to be the last full-fledged budget before the 2023 Assembly polls. The 2023-24 budget may be presented early next year, but it will be a vote-on-account considering the elections.

The CM announced a slew of projects for Mysuru apart from granting Rs. 89 crore to modernise the K.R. Hospital. A proposal will be sent under ‘Parvatamala Scheme of Central Government’ for construction of a Ropeway in Chamundi Hill of Mysuru and Mullayanagiri Dattapeeta Betta of Chikkamagaluru to promote Tourism. The runway of Mysore Airport will be extended with assistance from the Central Government, the CM added.

“It is proposed to create Augmented Reality/Virtual Reality (AR/VR) materials for 15 tourist sites of the State at a cost of Rs. 15 crore. This will be implemented for Mysore Palace on a pilot basis,” he said. Better services will be made available to youths by converging various youth centric schemes in the State. This has already been implemented in Mysuru, he noted.

‘The Global Technology Centre plug and play facility’ will be established at the Karnataka State Open University (KSOU) in Mysuru at an expenditure of Rs. 30 crore in a period of two years. In the year 2022-23, Rs.10 crore will be provided for this purpose,” Bommai said.

Further, the CM said that ‘Beyond Bengaluru Cluster Seed Fund for Start-ups’ will be established in Mysuru, Mangaluru and Hubballi on the lines of cluster managed by Karnataka Digital Economy Mission at an expenditure of Rs.20 crore. A grant of Rs. 12 crore will be provided for this project in the current year.

Hostels will be started for working women of Scheduled Caste, Scheduled Tribe and Minorities in Bengaluru, Mysuru, Hubballi-Dharwad and Kalaburagi cities by the Women and Child Development Department.

The State Government would provide assistance to Karnataka Cancer Institute in Dharwad, Amrut Shishu Nivas Mother and Child Super Speciality Hospital in Basavanagudi, Shri Niraji Bhuva Vishwastha Nidhi in Basavakalyan and Shakthidhama in Mysore in recognition of their contribution in Social Services.

For the first time, multistoried hostel complexes each of 1,000 capacity will be constructed through Public Works Department at a cost of Rs.250 crore in the State’s educational centres of Belagavi, Hubballi-Dharwad, Kalaburagi, Mangaluru and Mysuru to encourage higher education in the children of Schedule Caste, Schedule Tribe, Backward, Minority and other classes under new scheme “Deen Dayal Upadhyaya Sauharda Vidhyarthi Nilaya”, the CM said.

With a target to augment income, business, employment and exports, micro clusters of leather toys in Chikkaballapur, embroidery in Dharwad, Kowdi and Kinhala toys in Koppal, agarbathi in Mysuru, carpets in Navalgund, toys in Channapatna and Sarees in Ilakal-Guledagudda, Belgaum-Shahapur, Sidlaghatta and Molakalmuru will be developed, he added.

“Our Government has decided to restart the Mysugar factory which has stopped its operations since 2019-20. Government will run the Mysugar factory on an experimental basis for the next two years. Rs.50 crore will be provided for repair of machineries. Funds for working capital will be raised from financial institutions,” he said.

After getting approval from the Centre, the State Government will go ahead with the Mekedatu project. Rs. 1,000 crore fund has been allocated for this drinking water project.

Also, the first phase of the Yettinahole project will be completed and Rs. 3,000 crore fund for works related to the project has been allocated, the CM said.

A well-equipped training centre in relation to all production activities of silk will be established in Public Private Partnership in K.R. Pet of Mandya District, Chief Minister Bommai announced.

7 COMMENTS ON THIS POST To “Budget bounty for Mysuru”