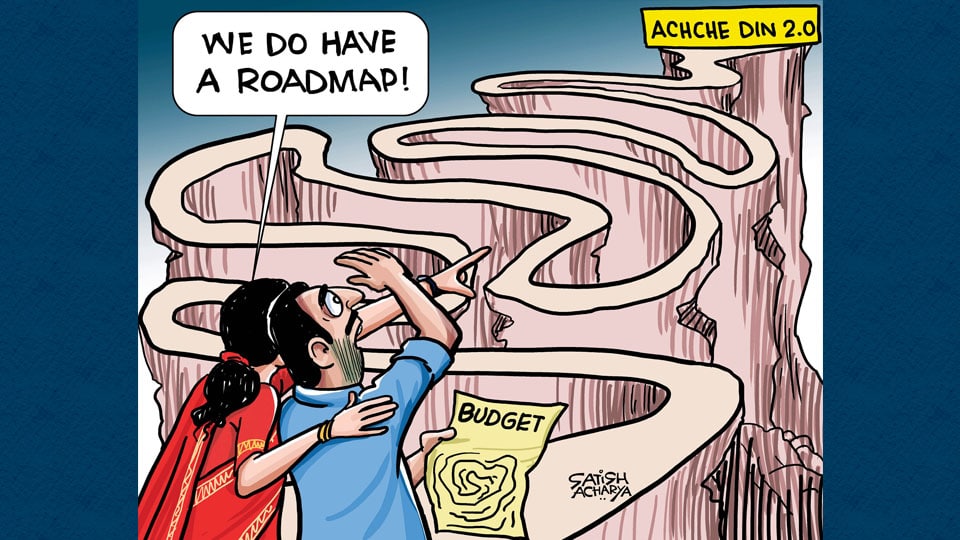 Like most Indians I too watch the Union budget. But usually by the end of the Finance Minister’s speech I feel like I have understood nothing and end up feeling like I have a learning disability. Finally my perception of a budget is reduced to — “what has gotten costlier and what has gotten cheaper.”

But for the past three years I have been making an effort to have a better understanding of the budget and this time more so, for two reasons. The first reason is Dr. Subramanian Swamy.

On June 16, 2016 at an event in Mumbai, Dr. Swamy had said,  “If I am in the Government, I will do it within one week, if I am not in Government I will do it within three years.” He was talking about abolishing Income Tax!  Well, it’s been three years and Income Tax remains. Even Dr. Swamy could not disprove the old adage: Two things are guaranteed in life — Death and Taxes.

But are more Indians paying taxes? Not yet. Since 2014 the tax base has increased from 3.31 crore to 6.85 crore but of this nearly two crore individuals who filed I-T returns paid zero tax ! Obviously people are still evading taxes.

In fact, according to a news report in Economic Times based on the I-T Department’s report on last year’s tax numbers, it seems of the 8.6 lakh doctors in the country, less than half of them paid Income Tax.

That is why it is argued that since India’s growth is fuelled by consumption unlike an export-oriented nation like China, abolish the Income Tax and make up that money by increasing indirect taxes. And since people will have more disposable income they will consume more.

But this increase in consumption will increase cost also, which will hurt the poor and increase the wealth gap. So Income Tax will stay. Also Income Tax adds 20% to the Government’s kitty which helps pay for the welfare schemes.

Now, some grudge welfare schemes as “freebies” but it is important to do this for a nation’s overall well-being. LPG, piped water, toilets, house, insurance and pension are schemes that bridge the gap between the “haves” and “have-nots.” It creates equality at least in basic services.

The problem, of course, is when Government does not help the tax-payers to grow so they can pay more taxes and create more jobs. Even worse, when it over-taxes the golden goose.

This brings me to the second reason I was watching this budget closely — Inheritance Tax.

Rumours were rife before this budget that the Government was planning on bringing back the abolished Inheritance Tax with a tax rate of 10% of the property’s value! Which means if I have to inherit  property or money in the bank I would have to work hard and get rich to pay the tax on it to possess it! I had planned to say “no thank you” to my inheritance, but since that tax never came, I still hope to receive the fruits of someone else’s hard work. Ah! Just like our Government.

Yes, our Government is not a fair partner.  Why do we pay the Government? Because it provides infrastructure, protection and other services for your business to thrive. But does it? In fact in most cases Government’s apathy and corruption is the reason businesses fail. That is why Gurucharan Das, the retired Head of Procter & Gamble said: “In my thirty years of active business in India, I did not meet a single bureaucrat who really understood my business, yet he had the power to ruin it.” And Government needs to fix this issue before taking a cut from corporate profits. Guess the forced retirement of Officers with chequered background recently is an attempt in that direction.

But more importantly while the Government has seen the political benefit in welfare schemes, it  should build such schemes while creating more tax-payers and not by taxing existing tax-payers more. Rich Indians today are paying more taxes than rich Americans! The Indian rich pay 42.7% tax, the Americans pay 40%.

Guess in the end a budget should be as Kautilya said, “A King’s tax policy should resemble a bee’s extraction of nectar from a flower: no enterprise should be taxed more than once; then it can flourish, profit and so can be taxed again another day.”

The Congress Party tasted political success with welfare schemes and they did it by robbing Peter to pay Paul and Paul kept voting for them. But today poor Paul has become aspirational, he wants an environment where he can fish for himself and catch as much fish as he wants, he simply doesn’t want to be given a free fish. That is why education and industry should be in sync and  this budget has failed in the former.

For now, I declare this a healthy budget.  Why? Well, Petrol is expensive so soon we’ll have to cycle to work. Not only is it good exercise but also decreases pollution. To add, cigarettes are even more expensive, so no more smoking, good for your health and wallet.

P.S.: When I heard Nirmala Sitharaman quote Lord Basaveshwara a couple of times yesterday I was surprised. And this morning 15 MLAs have resigned in the State Coalition. Was Sitharaman trying to appease the Lingayats, the dominant vote-bank in Karnataka? Is Karnataka headed for a mid-term poll? Guess, this budget had more than just numbers on its mind, it had politics too !