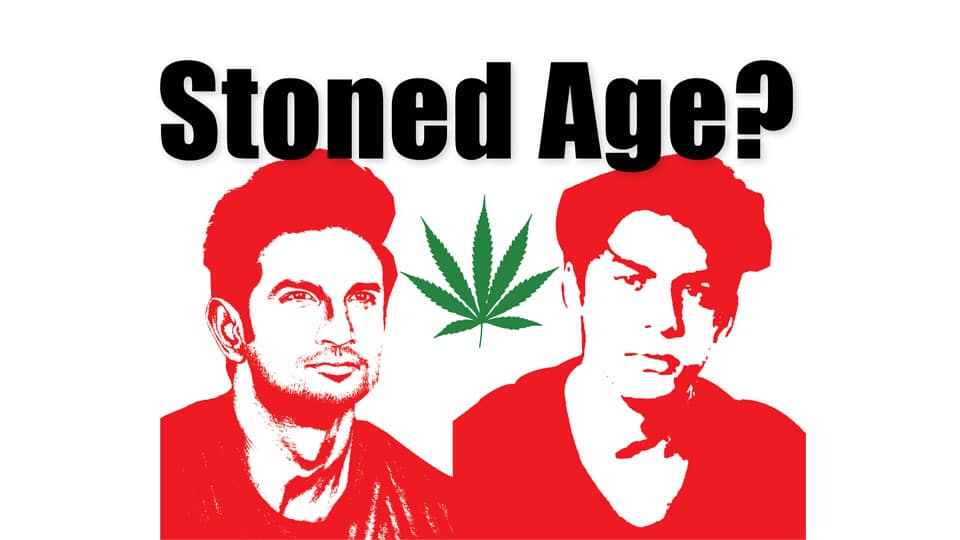 Since actor Sushant Singh Rajput’s death we all have learnt a great deal about ‘ganja.’ We learnt that globally it’s known as ‘marijuana.’ We learnt that it was a Spanish word. We learnt that in Spanish ‘J’  is pronounced as ‘H’. We also learnt that the news of ganja makes our TV anchors hyperventilate, which left many of us wondering if these anchors need some marijuana to calm their nerves. Guess, they were high on another, more potent drug called “sensationalism.”

We hope Aryan Khan’s arrest yields more than just a small ganja haul because ganja was never a problem in India, it is still not, but the entry of new dangerous chemical-laced drugs into India is.

Earlier the rich used high-value drugs, the rest smoked ganja. Now there is a new middle class that has disposable income who could get addicted to dangerous drug cocktails which will affect the social and economic fabric of India. We need the Narcotics Control Bureau (NCB) to act on these drugs instead of obsessing over ganja.

A magazine reported that the Indian youths today have entered the “Stoned Age.” “Stoned” is the word used in urban parlance for someone experiencing the effects of drugs, usually ganja.  But the truth is India has always been in the “Stoned Age.”

Ganja has been demonised for far too long, since we imbibed western prudishness. Maybe it’s time we realised that this herb has been part of Indian culture since time immemorial and own it. While we banned it, China has taken 600 patents for its use!

In India, the cannabis plant and its various parts — from resin to stem to leaves to seed — have been used for its medicinal properties in the form of hemp oil, used for recreational purposes in our festivals as bhang and used for spiritual purposes as hashish.

In Vedic literature, there are numerous references to cannabis as having medicinal value. “Sushruta Samhita,” the ancient Indian treatise on medicine written between the third and eighth BCE, recommends cannabis for specific illnesses.

Then, of course, anyone who has been to Khumbh Mela will tell you about how ascetics smoke hashish, in clay pipes called chillums even today!

Wonder if NCB would go there for a search and seizure operation? Well, they could end up being “stoned” with all the smoke or get stoned literally or enlightened spiritually, who knows?

But the point is, ganja has been part of our traditions and it was perfectly legal to use small amounts for personal use until we decided to appease the prudish Americans who forced ganja to be classified as a Schedule IV substance, putting it in the same category as destructive drugs like heroin.

So in 1986 the Narcotic Drugs and Psychotropic Substances (NDPS) Bill came into existence which made the procurement, sale and consumption of all drugs completely illegal. And good old ganja was put in the dangerous “drug” category. But then…

The Government may have passed a Bill but how do you manage tradition and vote bank? How can you tell people that they cannot drink bhang during Holi, how can you ban charas at Pushkar festival in Rajasthan, how can you stop a Sadhu from using his chillum at Khumbh?

Simple, do what we always do with laws, insert magic loopholes —  first verbal jugglery, which will lead to legal ambiguity, which then can be used as “political” or “settlement” opportunity. Here is why I say that.

Cannabis and its derivatives are banned in India under the NDPS Act of 1985. Cannabis is a generic name for a range of preparations of the cannabis sativa plant. But…

The law, while prohibiting the sale and production of cannabis resin and flowers, does not ban the use of seeds and leaves of the cannabis plant. This is why bhang, made with leaves (but who’s checking) is not illegal to consume! Wah! What a loop-hole Sirji!

Similarly, chutney made from cannabis seeds and popular in the Himalayan regions particularly Uttarakhand is not banned! And what about Sadhus….well, that’s the ambiguous part.

Speaking of “used for politics.” Just last month NCP Chief Sharad Pawar speaking about the arrest of his Party Spokesperson Nawab Malik’s son-in-law by NCB for possession of ganja said, “Nawab Malik’s son-in-law was arrested and kept in jail for possession of ganja. But fortunately, a few days ago his bail was approved. The Court highlighted that he was not possessing ganja but it was some kind of plant.” — What?!

First, since when are people arrested for carrying plants! Second, who walks around carrying “some kind of plant” in their pocket? The only plant that any man carries is either a flower in his suit lapel or tulsi leaves in his pocket after a temple visit.

Now, it seems the demonisation of ganja is on the anvil. Just last year, India voted in favour of a UN resolution to remove cannabis and cannabis resin from the category of ‘most dangerous substances.’

Of course when there is money to be made it all becomes legal like alcohol and tobacco. The marijuana market is expected to touch over 70 billion by 2028 and it’s not from people buying it to get high or stoned. It’s because innovators have figured how to use cannabis derivatives to make everything from cosmetics to clothes.

READ ALSO  Up in Arms - Pit

India can monetise its cannabis knowledge by producing cannabis-based herbal medicines which could have a global market. And there is the drink — already in some States bhang is being sold over the counter through a “specific licence”; so maybe smoking ganja will be available like cigarettes soon?

Illegality of smoking ganja may not change for now. But why must some people suffer the illegality while others get away with it? Why must a young man be arrested for possessing a miniscule amount of ganja while a blind eye is turned to a festival infested with it? That is unfair.

More importantly, it’s time to worry about the dangerous drugs entering India. The recent seizure of drugs worth Rs. 21,000 crore at the Mundra Port is a warning sign. As the Taliban rules Afghanistan, it will aggressively promote opium trade to fuel its economy and Pakistan, along with China, will gladly assist. This is where the agencies should be looking.

May be soon we should legalise ganja, to smoke also. There have been numerous reports where students and poor people have been arrested for having small quantities of ganja. Also some jails have reported that they have been overrun with “ganja smugglers,” in most cases they were just users. If we legalise this, no more smugglers, no more cash movement and maybe the Government can tax it too.  The West has found success in this strategy, maybe we will too.

For now, the NCB will keep falling flat on its face if it goes hunting for ganja smoking kids, when in fact it’s so commonplace in our country. More importantly, the agencies can look within, because according to Open magazine, many of the drugs that are hitting the urban market are drugs that are siphoned off from seized drugs kept in the evidence godowns of law-enforcement agencies.

Destructive drugs such as heroin, cocaine, MDM, etc., are truly a danger to society and the very fabric of a nation, this is what agencies should be going after, not ganja. If Aryan Khan’s custody and interrogation of other stars can help do this, then good. But simply going after  “stoned” youth is “Stone Age” policing.