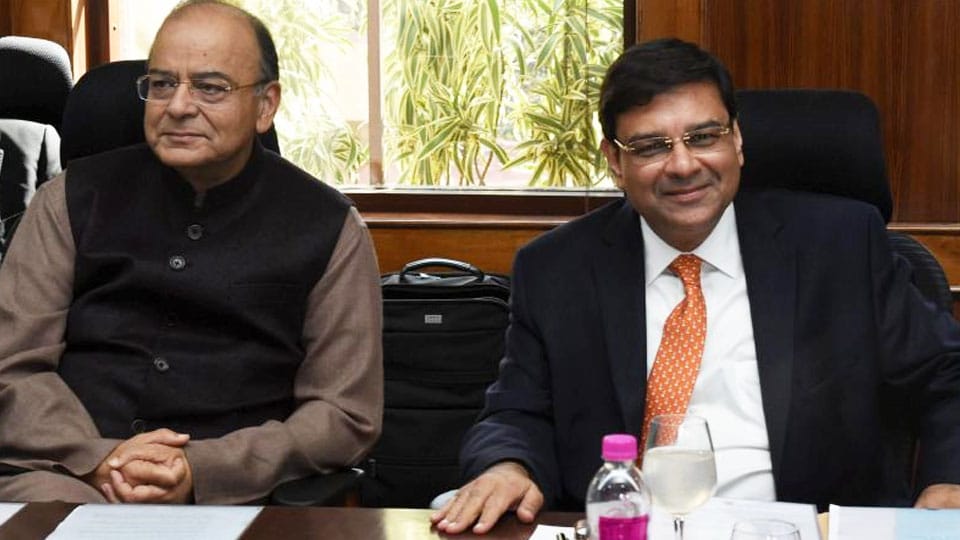 Burden of being always right

Finance Minister Arun Jaitley has the advantage of knowing that he is always right. Reserve Bank Governor Urjit Patel has taken his own time to learn that. Which is Patel’s problem. He started out as Jaitley’s handpicked man to replace Raghuram Rajan who simply had to go as Arvind Panagariya had to go and Arvind Subramaniam had to go. The international celebrity that he was, Rajan thought he knew banking and finance a tad better than the Finance Minister whose foundation, after all, was in law. But he forgot that the Minister was a politician, and politicians are wizards in all subjects from finance to rocket science.

Urjit Patel functioned obediently in the early days. When the country reeled under the impact of the half-baked, hastily implemented demonetisation two years ago, Patel became the target of attack by harassed citizens. The attacks grew harsher as ATMs failed as did RBI guidelines to restore some order. Patel bore the brunt of people’s wrath. The Reserve Bank was called the Reverse Bank.

The first sign of the RBI Governor trying to regain his reputation was the bank’s annual report a few months ago which showed that 99.3 percent of the banned currency had returned, thus putting an official stamp on the failure of demonetisation. Patel took another bold step when he asked banks to restructure their non-performing assets or initiate insolvency proceedings against borrowers, a move that could embarrass the Government which has distinguished borrowers among its friends. The RBI has also been taking a stand against banks that have been in the news for the wrong reasons though its hands seem to be tied in some cases (ICICI, for example).

The question now is not whether the RBI Governor has caused displeasure in the Finance Ministry, but how deep-going is the displeasure. Disagreements had fanned speculation about the Ministry imposing a section of the RBI Act that would make the Bank subservient to the Government. Adding fuel to the fire was a speech by RBI Deputy Governor Viral Acharya that went viral. He warned: “Governments that do not respect central bank independence will sooner or later incur the wrath of financial markets and ignite economic fire.” Even the General Secretary of the Reserve Bank Employees’ Association indicated the way the wind was blowing inside the venerable institution when he said there must have been pressing reasons for Acharya to say what he said publicly.

The words of the Finance Minister, however, leave no scope for debate: The RBI is at fault and has been at fault for a long time. When the previous Congress-led Government allowed indiscriminate lending by banks, he said, the RBI failed to check it. “It was a regulator but it kept pushing the truth below the carpet,” as Jaitley put it.

Jaitley has two powerful qualities that lend strength to his assertions: His conviction and his concern with only the facts he mentions; other facts do not exist or are a political conspiracy. A parliamentary committee reported in August that non-performing assets went up by Rs. 6.2 lakh crore between March 2015 and March 2016, forcing the Government to provide public sector banks with Rs. 5.1 lakh crore. Is that truth above or below the carpet?

What happened under the BJP Government happened under the Congress Government as well, showing the non-alignment of the powerful. Raghuram Rajan said in his 2017 book that large numbers of bad loans originated in 2006-2008 when too many of them “were made to well-connected promoters who have a history of defaulting on their loans.” The lesson which will not surprise citizens is that it doesn’t matter who governs, plundering will go on.

Jaitley doesn’t like anyone to disagree with him. So he let it be known that he wanted the RBI under stronger Government control. Clashes between the political order and the central bank are a familiar thing the world over. But always wisdom has prevailed, governments leaving the central banks effectively autonomous. This time also wisdom must prevail.

To achieve that end, it will be helpful if Jaitley shows a wee bit more respect to people with different views, not unusual in a democracy. Assertions by an RBI Governor need not necessarily be seen as anti-democratic. A former BJP Finance Minister need not be dismissed as “a job applicant at 80.” The leader of the main opposition party need not be called a “clown prince.” Arun Jaitley is, of course, always right. But should it mean that all others are always wrong?

4 COMMENTS ON THIS POST To “Burden of being always right”