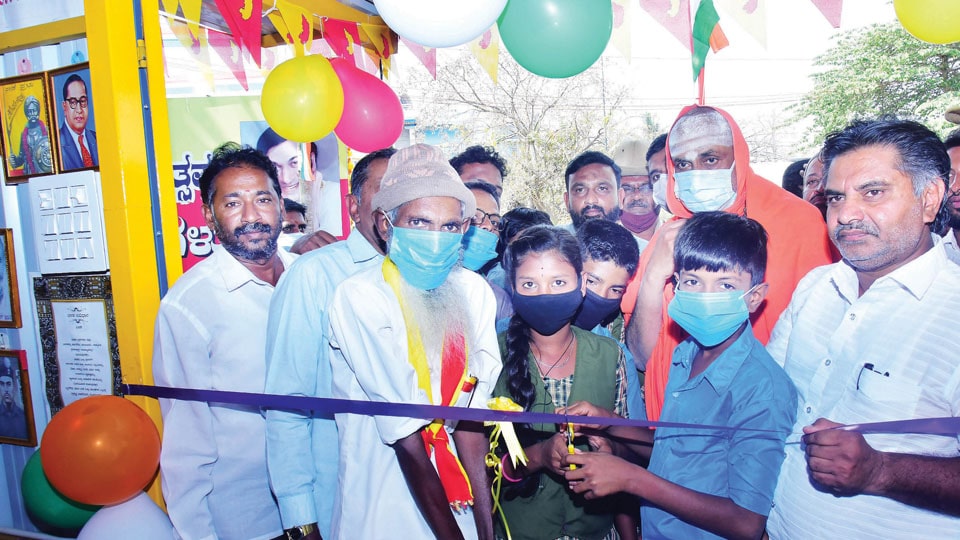 Mysore/Mysuru: The Kannada library of Syed Isak at Rajivnagar 5th Cross, which was burnt down in the wee hours of Apr. 9, 2021, was inaugurated on Wednesday as part of Republic Day (Jan. 26).

Interestingly, students inaugurated the library that now offers more than 2,000 books in various languages, particularly Kannada and newspapers in Kannada, English and Urdu. The library is located in an area where there is a majority of the Urdu-speaking population.

Syed Isak, a senior citizen who eked out a living by working as a daily wager, had pooled in his hard-earned money to build the library with zinc sheet roof at the corner of a playground in Rajivnagar. He was running the library for the benefit of the public for 11 years. But unfortunately, the library got burnt down.

Later it was discovered by the Police that an ignited match stick thrown into a sofa repair shop behind the library caused the fire. While relief poured in as the media brought to fore Syed’s plight, the promise made by authorities to build the library at the same place remained unfulfilled.

Syed Isak later himself built the structure out of the remaining funds that were sponsored by donors and elected representatives. Former Minister Zameer Ahmed Khan, MP Pratap Simha, Minister for Cooperation S.T. Somashekar and others had donated money. The library, rebuilt with corrugated metal sheets, is open to the public now.

Soon after the library was destroyed, the Mysuru City Corporation, Department of Libraries and Mysuru Urban Development Authority had jointly pledged to take up the responsibility of constructing a full-fledged library. But even after months, things did not move as per Syed’s wishes, forcing him to take up the reconstruction at a cost of Rs. 4 lakh.

READ ALSO  It will rain funds on Mysuru

At present, Syed has 2,150 books and the Professors of the University of Mysore have assured of donating 6,500 books.