Home » News » ‘Call to youths to unite and strengthen the country’ 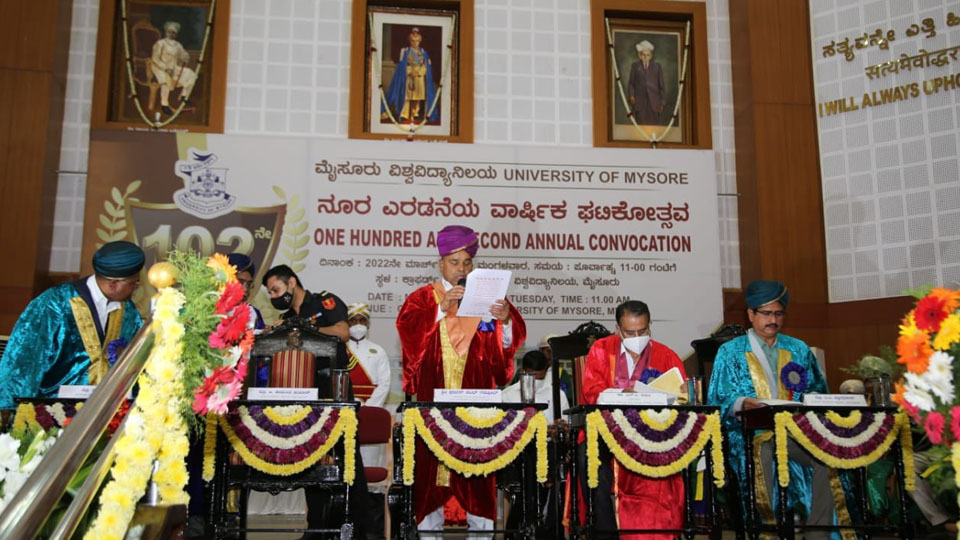 ‘Call to youths to unite and strengthen the country’

Mysore/Mysuru: Governor Thaawarchand Gehlot, who is also the Chancellor of Universities in Karnataka, said that achievers who have contributed to various fields with their selfless service were an inspiration to the youths of the country, which is celebrating Azadi Ka Amrit Mahotsav, an initiative of the Government of India to commemorate 75 years of Independence.

Speaking after inaugurating the 102nd Annual Convocation of the University of Mysore (UoM) at Crawford Hall in city on Tuesday, he said “It is our bounden duty to honour those who have achieved in the respective fields, for the benefit of the society. It will encourage them to continue their service to  society and also inspire the youngsters.”

He also lauded the achievements of former DRDO Director General Dr. V.K. Aatre, folk singer M. Mahadevaswamy and late actor Puneeth Rajkumar (posthumous), who were presented Honorary Doctorates by the UoM for their achievements in their respective fields.

As the country is celebrating the Platinum Jubilee of Independence, he called upon the youths to join hands to strengthen the country and build a better society.

Congratulating the gold medal winners, the Governor called upon the students to get motivated by the medallists and said “you can also make your parents proud by topping in your education.”

The Governor advised the degree holders to work towards realising the goals of ‘Atmanirbhar Bharat’.