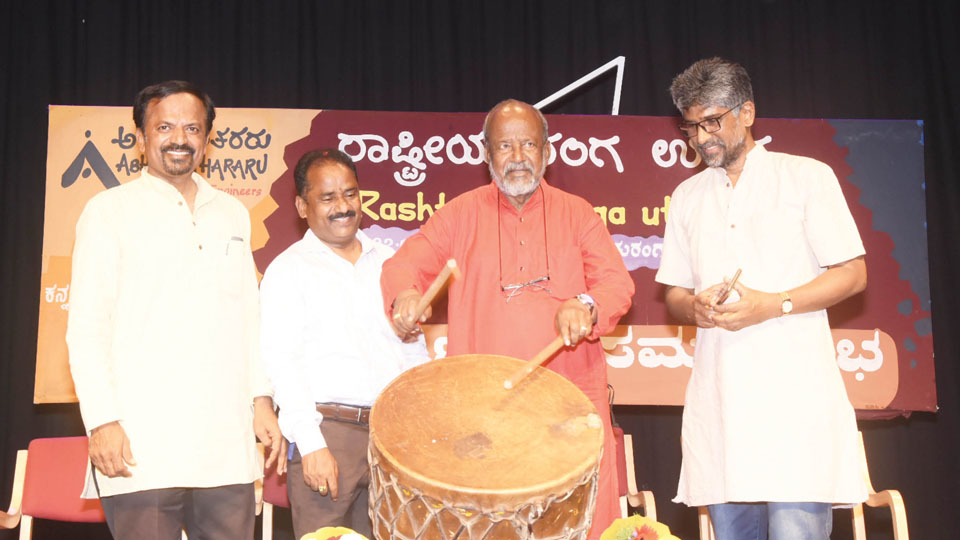 MysoreMysuru: Maintaining that Mysuru, which is buzzing with theatre activities throughout the year, has an intellectual transformation engulfed in it, senior artiste and former Karnataka Janapada Academy Chairman Srinivas Kappanna opined that the theatre was open to one and all. He was speaking after inaugurating ‘Rashtriya Ranga Utsava,’ a 5-day Theatre Festival organised by the city’s Abhiyenthararu – A Theatre for Engineers, in association with the Ministry of Culture, New Delhi, at Kiru Rangamandira (Mini Theatre) in Kalamandira premises here yesterday.

Pointing out that the Ranga Utsava has immediately followed the just concluded Bahuroopi Theatre Festival, Kappanna said that the people of Mysuru have been very much supportive of theatre and as such he has great respect for this region.

Noting that continuous theatre activities has firmly cemented Mysuru as the ‘Cultural Capital’ of the State, he recalled activities that took place when he headed Karnataka Janapada Academy.

Abhiyenthararu President  H.S. Suresh Babu, in his address, said that his theatre troupe has been involved in theatre activities for the past 29 years. Pointing out that Engineers and Engineering students are being trained in theatre for the past 13 years, he said that so far more than 700 people have been trained.

On the first day yesterday, artistes of The Mahi Theatre, Bengaluru, enacted the play ‘Amma Mattu Suhel,’ scripted and directed by Karthik Hebbar. The 5-day event concludes on Mar. 26.