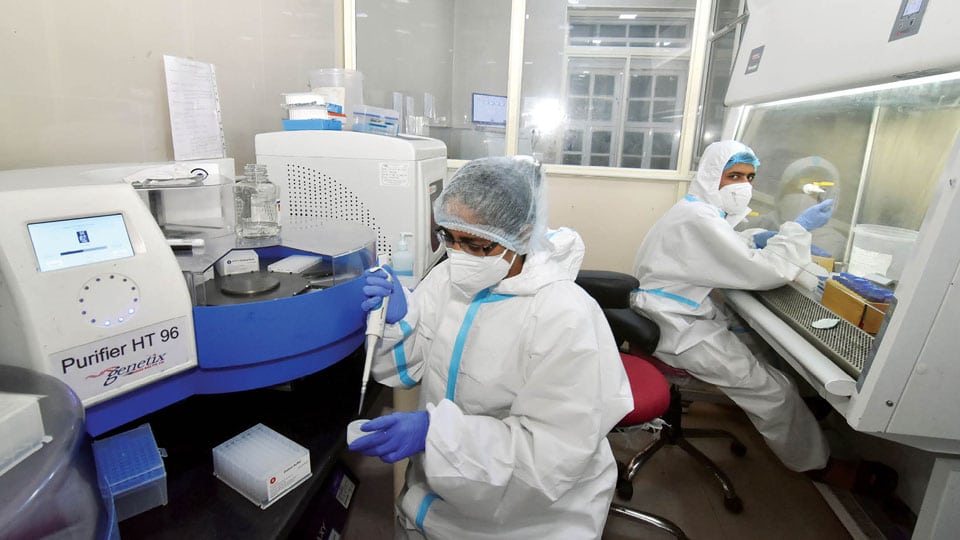 Mysuru: The District Administration is learnt to have decided to put a cap on number of RT-PCR test daily at 3,500 for the whole district to put brakes on advance booking of Corona positive patients with very mild symptoms.

This was decided at a meeting convened by Deputy Commissioner Rohini Sindhuri to review COVID-19 condition in the district. Accordingly, the RT-PCR henceforth will be recommended by doctors at COVID Mitra Triage  and Counselling Centres to come up in city. Then only, test will be conducted at designated free testing sites.

Doctors, depending upon the condition, will decide whether a particular patient requires RT-PCR, X-ray or CT scan.

A Senior Officer who attended the meeting told SOM that the number of testing centres in each taluk will be reduced to just two and also bring it down even in Mysuru city. As on today, the number of testing has crossed 8,000 mark with panic-stricken public rushing to free testing centres. This has burdened the staff at laboratories, the Officer said.

A few people were getting tested frequently no matter whether they required it or not. Hence, the District Administration wants to restrict the number of RT-PCR test to 3,500 per day for the whole district.

Another major decision taken in the meeting included opening of COVID-19 Care Centres (CCC)  in Hoblis of Taluks in the district in the wake of surge in positive cases. Of late, six Taluks were competing with Mysuru City in regard to number of positive cases. So, Taluk Officers were told to open CCCs in Government Hostels and other buildings to accommodate patients of that particular taluk to restrict their movement. Now, everyone wants to take treatment in Mysuru Hospitals no matter whether they have mild or serious symptoms. This has come in the way of allotting bed to patients in serious condition. Some people book the oxygenated beds once they test positive in RT-PCR test despite having mild symptoms that required home quarantine, the Officer rued.

Those who could be cured in home quarantine will be given the medical kit containing medicines and sent back home with do’s and don’ts pamphlets.

The Officer noted that it has been decided to reserve 30 percent of vaccine for those taking first dose and 70 percent for second dose takers. This is being done in view of shortage of vaccine.  On Tuesday, 20,000 doses of vaccines were received and it will last for just two or three days. Since priority should be given to second dose takers the first dose takers will not get that much of attention.

The vaccination officers were in a piquant situation following pressure to inoculate Jain monks. Since they have relinquished all the worldly possessions, they don’t keep any records such as Aadhaar or PAN  cards and other Government documents without which they cannot be vaccinated. This matter has been brought to the notice of State Officials who will take a call in this regard, the Officer said.