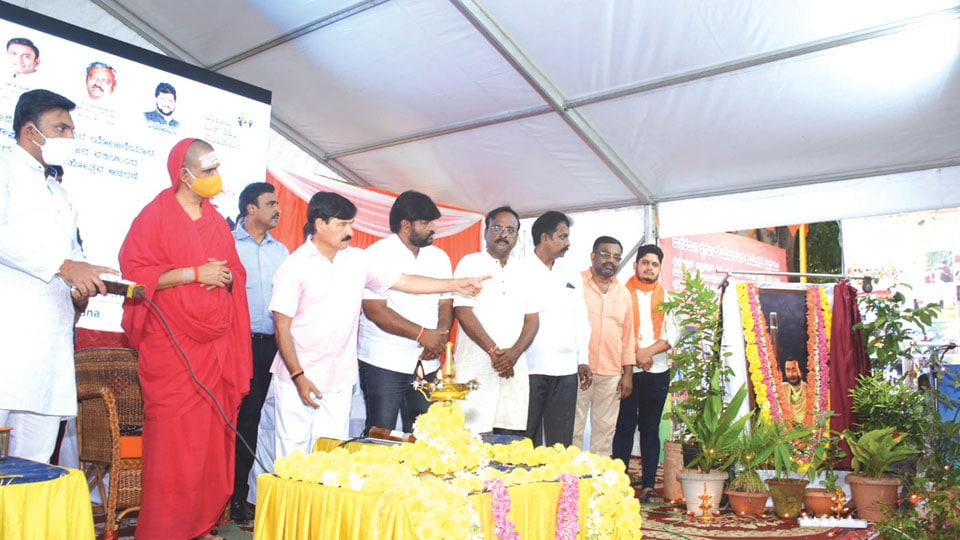 Mysore/Mysuru: Declaring that K.R. Assembly Constituency in Mysuru city is the first in the State to achieve cent percent target in COVID vaccination, Health Minister Dr. K. Sudhakar said that Constituency MLA  S.A. Ramdas must be credited  for making relentless efforts to achieve the target.

He was speaking  to presspersons after taking part in ‘Modi Yug Utsav’ programme organised as part of Prime Minister Narendra Modi’s 71st birthday celebration, at Vidyaranyapuram Park here on Thursday.

Pointing out that 2,40,000 people of K.R. Constituency have received jabs in a record period, Dr. Sudhakar reiterated that it was because of the MLA’s efforts. Maintaining that Karnataka has achieved 80 percent first dose vaccination, with 5.6 crore population receiving jabs, he said that it has been planned to vaccinate the entire population of the State with two doses by the end of the year.

Expressing disappointment that people in some tribal belts were not coming forward for getting vaccinated, Dr. Sudhakar  regretted that Opposition parties have continued to play vaccination politics despite the State being in the forefront of vaccination.

Continuing, the Health Minister  said that the third stage of clinical trial for vaccinating children is underway and added that children in the age group of 12 to 17 years will be vaccinated as per guidelines, once the Government gives sanction.

He said that the service of all health staff who were appointed on temporary basis when the pandemic broke out last year will be extended by three more months, in the wake of reports of possible third wave of attack.

Replying to a question on vacant posts in the Health Department, Dr. Sudhakar said that more than 4,000 doctors and other medical staff have been newly recruited and likewise, the appointment of paramedical staff too will take place. The Government plans to appoint hundreds of nurses in a month through KPSC, he added.

The Minister also launched the Integrated Health Scheme implementation drive, Ayushman Health Card and Wheel Chair distribution to beneficiaries and released a poster on ‘Music is a divine  cure for all ailments’ (Sangeetha Sarva Rogakkoo Divya Aushadha), dedicated to Music Icon Tansen, on the occasion.

MLA Ramdas, in his address, said that 300 music loving children of his Constituency will be selected from 100 schools and trained in music by the Education Department.

Taking part in the launch of the Music Therapy Centre at Jayanagar’s Community Health Centre, Minister Dr. Sudhakar said that the first Music Therapy form of treatment  in the State is being started in Mysuru as a pilot project. This form of therapy  will be extended to other parts of State after coming to know of its success here, he added.