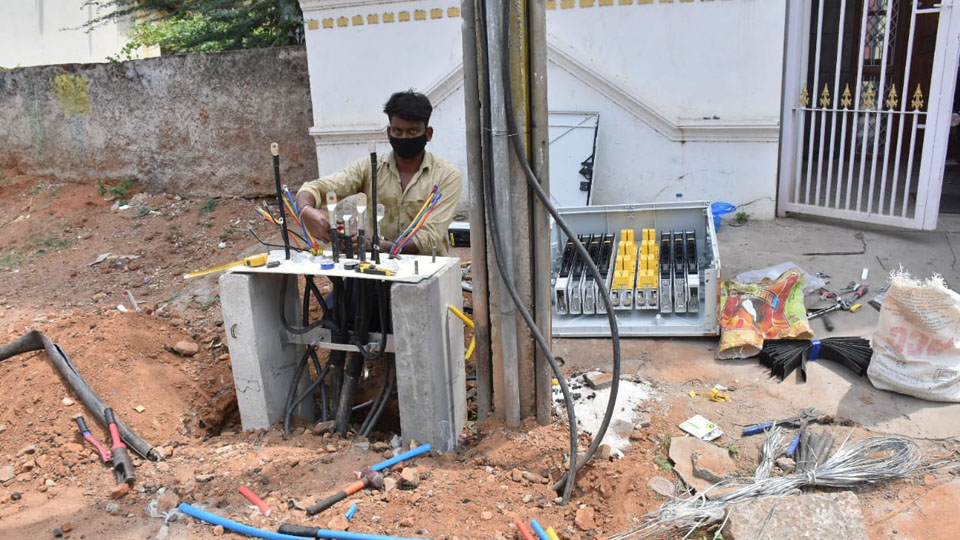 Mysore/Mysuru: The massive underground power cable laying project worth over Rs. 300 crore that was stalled due to COVID-19-induced lockdown has resumed in city. The first phase of the project is expected to be completed in another three months.

The first phase of the project covers over 500 kilometres of areas in city and over 70 percent of the work has been completed. The major part of the work is toad drilling and digging that have been completed in four sub-divisions –– Hootagalli, N.R. Mohalla, Kuvempunagar and City Centre. The next phase will cover another 500 kilometres and the Government is yet to make budgetary allocations.

“Though underground cable project is more expensive than aerial bunching of cables, underground cables will help improve reliability in power supply, reduce the number of accidents caused by overhead wires, and improve the aesthetics of the city,” he said.

After the road is drilled by Horizontal Direction and Drilling Machine and pits are dug up manually, the power cables are laid and drawn from one end to another. From here, connections are provided to a cluster of homes and shops in any given area, engineers explained.

The wires are a combination of High Tension (HT) 11 KV line and Low Tension (LT) line that supplies power from house to house. The LT line carries 440 volts of power. Feeder Pillar Boxes will be installed on the roadsides and these boxes will supply power to 8 to 9 houses and there will be Control Points. The moment there is some problem in the main KV line, the Control Point next to the line trips, officials said.