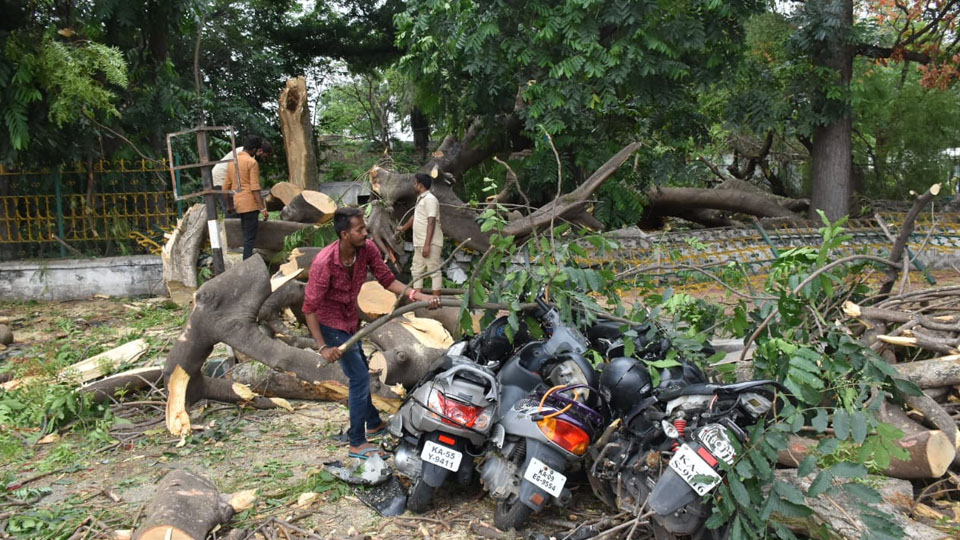 Mysore/Mysuru: Moderate to heavy rains lashed city yesterday night bringing some respite to the heat from the scorching sun.

People who were reeling under hot sun since yesterday morning heaved a sigh of relief as the rain began to pour at about 7.15 pm. Though the rain stopped at about 8 pm, it began to pour heavily from 8.30 pm which continued till midnight.

Following heavy rains and wind, branches of trees fell on a few power lines snapping them resulting in a few areas plunging into darkness. Also, rain water overflowed from clogged drains in low- lying areas resulting in rain water entering some houses. The residents had a tough time removing rain water from their houses.

In Besthara Block 3rd Cross, sewage water overflowed from a drain and entered houses resulting in the residents spending sleepless night draining out the water.

The residents alleged that drains have been constructed unscientifically in the area resulting in rain water not flowing smoothly and added that during rains, sewage water mixed with rain water overflows from the drain and gushes into houses.

They also said that sewage water gets stagnant inside the drain resulting in foul smell emanating from it and added that there has been an increase in mosquitoes and fear of contagious diseases lurking the people.

While a huge tree was uprooted on Sanmarga 8th Cross in Siddarthanagar, a huge branch of a tree fell on SJCE Road in Manasagangothri. The Abhaya team of Mysuru City Corporation (MCC), who rushed to these spots, managed to clear the fallen tree and branches from the road.

Meanwhile, a CESC Officer said that following heavy rains yesterday night, a few trees and tree branches fell on power lines at Mysuru city, Varuna, Devalapura and other places, plunging many places into darkness. He further said that repair works are being undertaken and power supply would be restored soon.