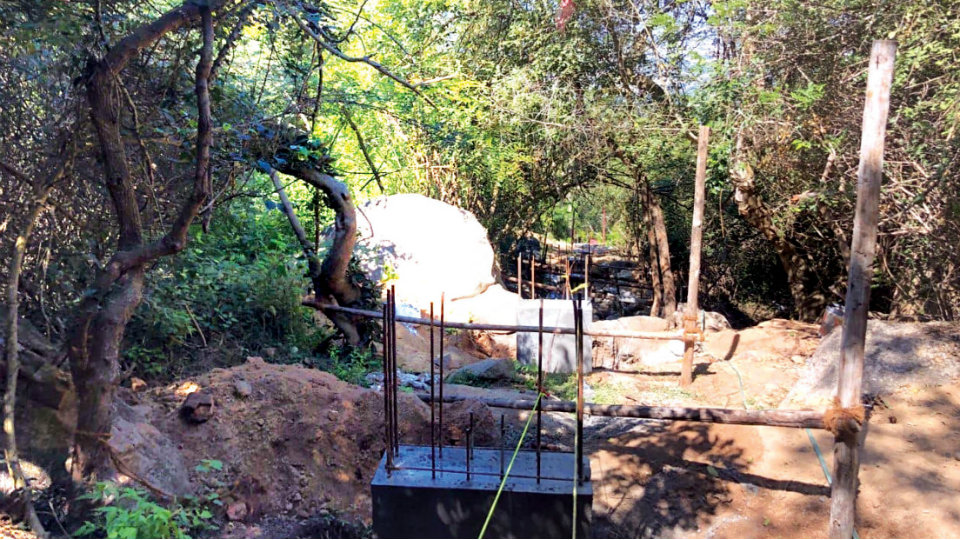 Mysuru:  The ambitious project to supply Cauvery water to parched regions atop Chamundi Hill is under rapid progress and the residents on the Hill, pilgrims and the people managing the day-to-day affairs of Sri Chamundeshwari Temple need not worry about water during hotter days.

The mega drinking water project that was sanctioned in July 2017 is being implemented in full swing at the foot and atop the Hill by Karnataka Urban Water Supply and Drainage Board (KUWS&DB).

It is a Rs. 6.95 crore project and it caters to the demands of population growth and the devotees visiting the Hill till 2050. The water link to the project is near the Mysore Race Course (MRC) till where regular water is supplied by the Mysuru City Corporation. From there, water will be supplied till the ground-level storage tank at the foot of Chamundi Hill.

From this point, water will be supplied through motors to the 10 lakh litre ground-level storage tank that has been constructed atop the Hill. A 2,500-metre 350 mm DI pipeline has been installed from Race Course Road Circle till the Chamundi foothill. From the foothill to the water tank atop the Hill, a 323 mm MS pipeline extending up to 1,300 metres has been laid.

On the forest route of the Hill, 60 cement concrete pillars have been constructed every six metres to hold the pipelines. Over 38 pillars are to be erected. A pipeline running near the Rajendra Vilas Palace is obstructing the construction of these pillars, KUWS&DB sources said.

At present, four to five lakh litres of water is being supplied to the Hill every day and on an average, it caters to the demand of 3,500 visitors and Chamundi Hill residents and places like Dasoha Bhavan, Government offices and schools. This water quantity is hardly enough to meet the growing demand. Now, people do not visit the Guest House atop the Hill as there is no water supply there.

Considering the demand for water, the State Government, in 2017, had sanctioned the project. Chamundeshwari MLA G.T. Devegowda had insisted on the project as it is his Constituency. The pump house works at the foothill has been completed and two 350 HP pump sets and one 500 KVA transformer has been set up.

Along with the new project, the existing 40-year-old pipes at present supplying water to the Hill will be replaced and upgraded. The existing 11 KV line and 100 KVA transformers have been shifted. Two new water tanks have been constructed and while the tank at the foothill has the capacity of 5 lakh litres, the water tank atop the Hill has a capacity of 10 lakh litres.

Rs. 4.78 crore has been released so far for the ambitious project and Rs. 2.17 crore will have to be released by Chamundeshwari Temple Religious Endowment Department. The new project envisages supplying water up to 3 million to 3.6 million litres of water per day considering the rise in population in 2031 and 2046.  The work order for this project was issued on March 5, 2018 to Ramesh, of Tumakuru-based N.M.R. Company.