Home » Feature Articles » Chamundi Hill Development: Why are our leaders bent on a lop-sided development? 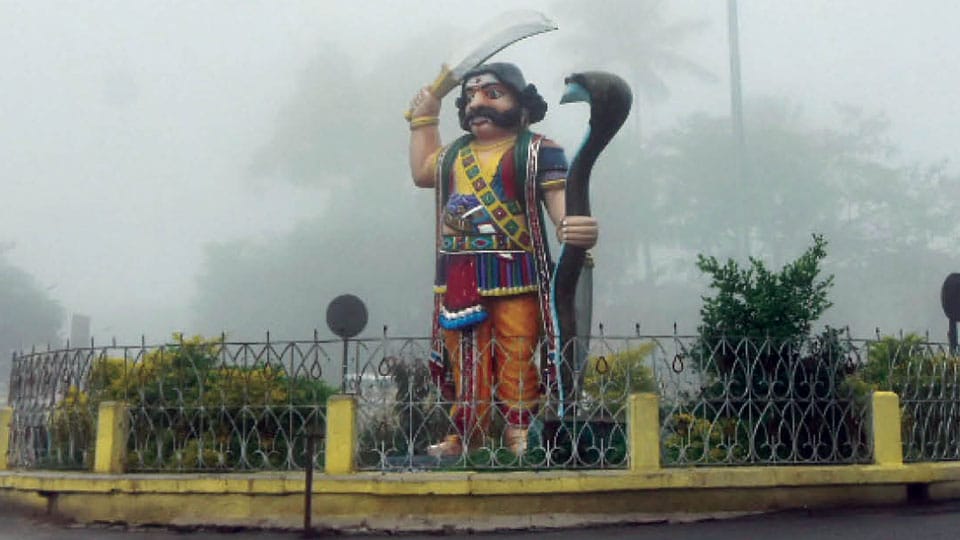 Chamundi Hill Development: Why are our leaders bent on a lop-sided development?

Way back in the early 90s, when IFS Officer Dr. Kodira A. Kushalappa was Conservator of Forests in Mysuru some efforts were made to green Chamundi Hill using a Norwegian grant. One should wonder why our leaders did not think of greening ourselves and had to depend on foreign aid.

On the other hand, as early as in 1994 Karnataka Government took interest to sign a BOT (Build, Operate and Transfer) contract for constructing a Ropeway on Chamundi Hill with Sikka Traders for Rs. 6.5 crore. Mysureans came to know about the contract only in 2005 and that too when the construction work was about to begin. Then the civil society headed by Mysore Grahakara Parishat (MGP) launched the ‘Save Chamundi’ movement. Luckily for Mysureans the project was dropped. Was it because of protest?

However, when funds were easily available under JNNURM, again efforts were made in 2009 to construct Cable Car Project. Again MGP protested and succeeded in stopping it. Again it was revived in 2012 by Industries Minister Murugesh Nirani and then by Tourism Minister C.P. Yogeshwar in early 2021. During these times, a project to provide Canopy on the steps leading to the top of the Hill was mooted and dropped after protest. Whether by coincidence or not, every Minister associated with efforts to disturb the nature on Chamundi Hill has lost his position unable to pursue these projects.

For some unknown rea-sons, Ministers are bent on constructing a Ropeway which is economically unattractive, environmentally unfriendly and politically controversial. Is it difficult to guess why?

However, serious attempts by the Government started in 2016 to create a concrete jungle in the name of promoting tourism which laid the foundation for the extensive vandalism of the Hill. It consisted of multi-level parking (600 cars), commercial complex (116 shops), dormitory, covered queue line for pilgrims, etc., costing about Rs. 80 crore. The Government could easily raid the temple offerings to meet construction cost and did not have to depend on the State budget.

Soon after Mysureans came to know of these grandiose plans, NGOs led by MGP along with Let’s Do It Mysore started to oppose. Following events give some of the significant steps taken by the NGOs.

On May 19, I talked to the then Ecology Minister B. Ramanath Rai requesting him to stop the vandalism that is being carried out by the Government in the name of ‘development’ on Chamundi Hill. He claimed at that time he did not know anything about it.

A public debate was held on May 27, 2016, at the Institution of Engineers (IE), JLB Road, in which experts expressed their opinion on why such construction will harm the flora and fauna of the Hill.

On May 29, 2016, a large number protestors (around 1,000) met at the foot of Chamundi Hill and climbed the 1,000 steps to create public awareness in which Royal family members and several leading people of the city participated to express their support to stop the construction.

On June 18, 2016, a candle- light march to save Chamundi Hill was organised in which over 3,000 participated in the city.

On June 18, 2016, when the then Ecology Minister Ramanath Rai visited Mysuru to promote tree planting,  he first refused to talk to NGOs and when confronted he told us that the area of the construction on the Hill does not belong to the Reserve Forest.

From the debates and public meetings, it became clear that the Government of Karnataka was in violation of Forest Conservation Act since the concerned forest official had not given his approval. Since 1928, Chamundi Hill Complex is classified as Reserve Forest.

Since there has been no Environmental Impact Assessment prior to the starting of the construction, it is violation of Environmental Act. In the event, a less restrictive and considerably less complex Environmental Management Plan (EMP) was developed to hoodwink the public.

Since Devikere and Cha-mundeshwari and Maha-baleshwara Temples are heritage buildings, any “development” activity without securing approval from Heritage Committee is illegal. Despite all these facts, no Government officials raised their little finger to stop the work.

During these protests, I had predicted that multi-level parking will become an eyesore within few years when private vehicles will be banned. Looks like that day may not be too far looking at the landslides and those crumbling roads following heavy rains.

According to a rough estimate provided by the Chairman of Builders Association of India (BAI), Mysuru, construction cost of the multi-level parking complex is only around Rs. 40 crore while the sanctioned amount was Rs. 60 crore!

Despite EMP having a clause that no dynamite (or minimum) will be used, and similar assurances were given during the meetings, there was extensive use. While this has certainly disturbed the wild animals and birds, it might have had impact on subsoil and temple buildings.

MGP approached National Green Tribunal (NGT) which turned it down on some technicalities. MGP’s effort in filing a PIL in the High Court did not produce any useful results. HC directed the Ministry of Environment to examine and give the report. MGP then approached Supreme Court  where also we did not succeed. As expected the experts who came did not find any problem with the project. We tried our best to convince them to the contrary. Only success NGOs had was that originally suggested four-lane project was dropped.

Now under Pilgrimage Rejuvenation And Spiritual Heritage Augmentation Drive (PRASHAD), further vandalism of the Hill is likely to happen. The proposal submitted by the Tourism Department of Karnataka instead of promoting spiritual tourism is hell bent on promoting commercial tourism. There is not one idea or suggestion to implement India’s civilisational message of “simple living, high thinking” proposed by Prime Minister Modi during 2015 Paris Summit. Rs. 100 crore will be spent to “beautify” the Hilltop with “architectural marvels” instead of greening the Hill.

Instead of developing a Mysuru Model which others could adapt, Hampi and Tirupathi models are suggested under PRASHAD. These two have no relevance to Chamundi which is a small Hill. PRASHAD suggests to involve stakeholders while developing projects. Excepting the use of some young graduates and faculty of Mysore University in collecting data, no stakeholders (including the MP, MLAs, Corporators) seem to have been consulted.

We the activists (some of us are derisively referred to as armchair environmentalists or worse as eco-terrorists) have put an online petition to collect public opinion and to put pressure on the elected leaders to drop the currently proposed project. Unfortunately, to our surprise, reaction from the public has not been overwhelming.  As on Nov. 18, there have been less than 60,000 signatures. Our goal was 3,00,000 from everywhere. City alone has over seven lakh netizens. Public must be acting like the people in Tenali Rama’s story putting water in the pond expecting others to pour milk. Hopefully, after reading this article which gives an extensive discussion of the efforts attempted to spend money on one pretext or the other on Chamundi Hill by some of our elected leaders, public will wake up to sign the petition. In any democracy, it is the number that counts and not the brilliant ideas or well-thought- out plans.