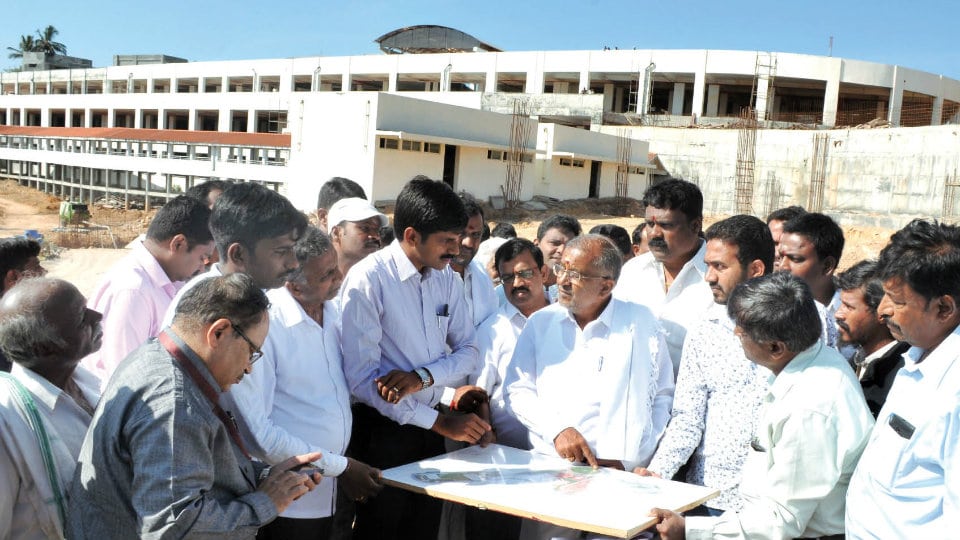 Chamundi Hill multi-level parking to be completed by March

Mysuru: The ongoing project of multi-level parking atop Chamundi Hill, where more than 600 cars can be parked, will be completed by this , said Mysuru District Minister G.T. Devegowda.

Once the project becomes a reality, parking woes atop the Hill will be things of the past,  he claimed.

Every day, an average of more than 10,000 people visit Sri Chamundeshwari Temple atop the Hill, one of the famous tourist spots in Mysuru. The multi-level parking which is being constructed at a cost of Rs.79.9 crore can easily accommodate more than 600 cars.

The total area earmarked for the project is eight acres and the built-up area is 31,000 square meters. Though the foundation for the project was laid in April 2016, the work was delayed due to various hurdles and the actual work started in November 2016 and was to be completed in March 2017.

This morning, Devegowda visited the building and inspected the parking lot works.

Inspecting the works, the Minister said that environmentalists had filed several petitions against the multi-level parking works and all the hurdles have been cleared now. Also, there was a huge presence of rocks in the construction area and this delayed the works. He said that the pending works including the construction of parking platforms and concrete paths for vehicles to enter the parking lot will be completed by the end of March.

The road leading from the parking lot to the main road will be widened and once the construction is completed, the existing bus stand will be shifted to new place. The space to house the bus stand has been earmarked next to the parking lot. There are three levels in the multi-level parking lot and 600 cars can be parked, the Minister said.

A separate building has been constructed to accommodate vendors of flowers, puja material and fruits and all the temple vendors will be shifted there on the lines of Tirupati Temple, he said and added that there are 116 shopping outlets inside the building for the vendors to set shop. The shopping complex will help decongest the main street.

For the convenience of devotees, a 500-metre walkway has been constructed from the parking lot to the temple. This walkway is covered at the top to protect the devotees from sun and rain.

“I have asked the officials to look into the possibility of building an escalator from the parking lot to the temple for the convenience of physically challenged and elderly devotees,” he  added.

Chamundi Hill multi-level parking
Kurubarahalli Survey No.4 & Alanahalli Survey No.41: Aggrieved residents to take out ‘Bengaluru Chalo’ on Feb.11
Can ULIP be a fruitful Investment in the Long run?