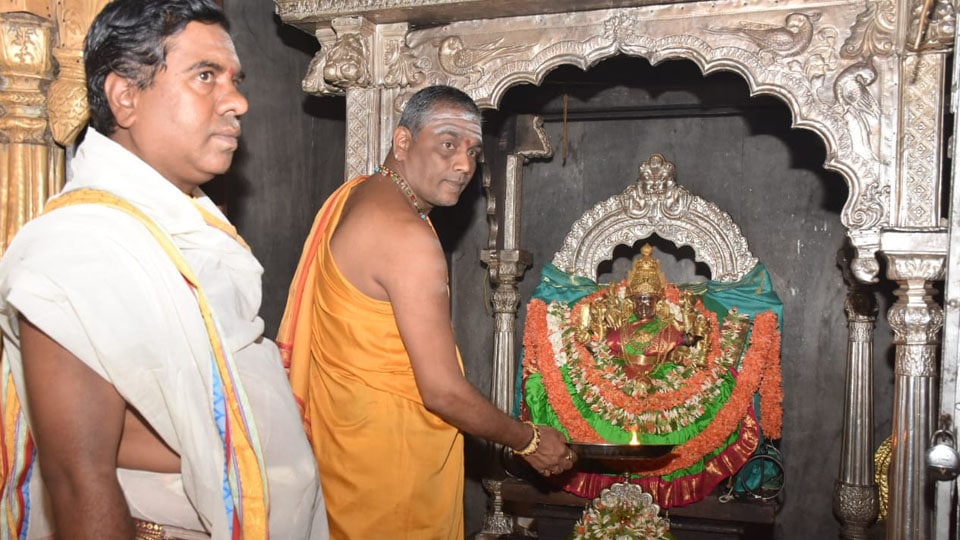 Mysore/Mysuru: At a time when many temples in Karnataka are operating with the interest amount they get from their bank fixed deposits and at a time when it has become difficult for temples to pay salaries of staff, thanks to lack of visitors due to COVID contagion, the Chamundeshwari Temple atop Chamundi Hill has shown a steady rise in revenues.

In just 38 days, Rs. 1,14,18,628 has been collected at the Temple, proving a point that it is one of the most revered Temples and COVID or no COVID, there is a steady stream of visitors who bow before the Goddess and hand over offerings.

When the Temple offerings were accounted for on Nov. 9 for the first time after lockdown ended and after all religious places were thrown open to public, the Temple authorities recorded an income of Rs. 77,57,627. After that, the offerings were counted on Dec. 16 when it yielded a revenue of Rs. 1,14,18,628.

Immediately after the temples were open after lockdown, stringent restrictions were followed including markings for social distancing and mandatory wearing of masks. Yet, there was a steady stream of devotees. Post-October, the crowd increased as schools and colleges were declared closed and the academic activities were limited to online classes.

Weekends saw more devotees rushing to have a darshan of Goddess Chamundeshwari and interestingly, most of the devotees depended on their private vehicles for the visits instead of public transport. This also increased income at the Chamundi Hill Multi-level Parking System that was thrown open to public in November. The income from vehicle parking also goes to the Temple funds as the facility is managed by the Temple authorities.