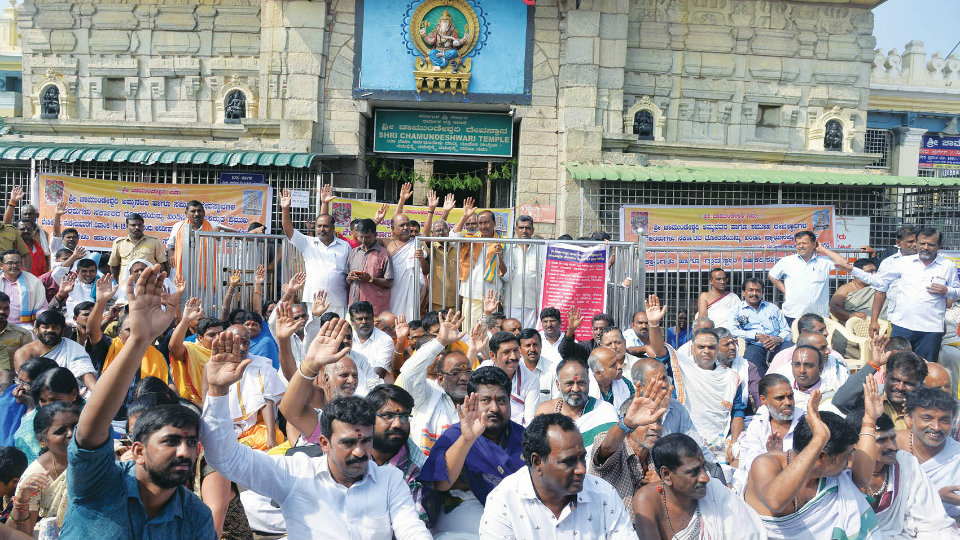 Over 250 priests, permanent and temporary employees of Sri Chamundeshwari Temple and other temples atop Chamundi Hill, 18 Palace Temples and Tripurasundari Jwalamukhi Temple at Uthanahalli were protesting since last Friday in support of their various demands.

The employees and priests manage services at over 23 temples were protesting pressing the government to fulfil various demands including the implementation of Sixth Pay Commission recommendations, additional Dearness Allowance, regularisation of their services, bonus, compensatory jobs,  medical facilities besides to release salary through Kaveri Grammena Bank branch atop Chamundi Hill and other demands.

As the staff continued their indefinite strike, MLAs S. A. Ramdas, L. Nagendra, MCDCC Bank President G.D. Harishgowda and others visited the spot yesterday and convinced the agitators in withdrawing their protest.

MLA  Ramdas had telephoned Muzarai Minister Rajashekhar Patil on the spot and arranged talk with Srinivas who is the  President of Chamundeshwari, other Temples Priests and Staff Federation.

He said that the Minister had promised to fulfil most of their demands after holding with meeting in city on Dec. 24 with concerned officials and local MLAs.

Chamundeshwari and other Temples Executive Officer Prasad too visited the spot and announced to release the bonus for the year as he had received the directions from State Muzarai Department Commissioner to do so.

Meanwhile, The Chamundeshwari Temple Priests and staff have threatened to resume their strike from Jan.1 if their demands are not met within the set deadline.