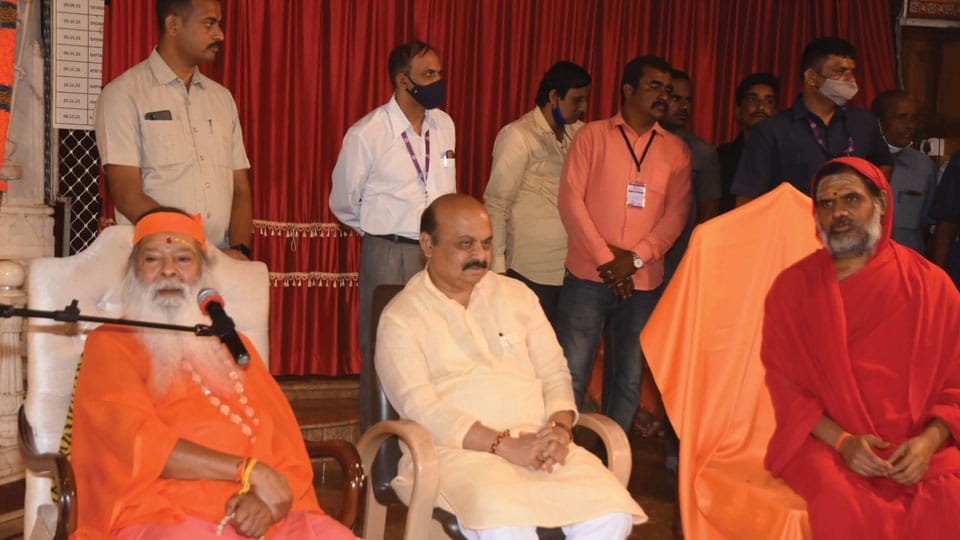 Mysore/Mysuru: Chief Minister Basavaraj Bommai arrived at Mysore Airport in Mandakalli this morning to attend a slew of programmes in city.

Contrary to the earlier decision where CM Bommai was supposed to chair a high-level meeting in Mysuru today to finalise the preparations for the International Day of Yoga (June 21) where PM Modi will participate, the CM preferred to attend a programme at Sri Ganapathy Sachchidananda Ashram on Nanjangud Road and then head straight to Lalitha Mahal Palace where a Vibhag Pramukh meeting was organised in the run-up to the elections to the Legislative Council from the South Graduates Constituency.

The CM did not hold the high-level meeting in Mysuru as he had already conducted a review meeting in Bengaluru yesterday and passed on instructions to the Mysuru District Administration to begin preparations to accommodate 15,000 people inside the Mysore Palace. Also, the State Government has released Rs. 10 crore to give a facelift to the roads on which PM Modi’s cavalcade will travel on June 20 and June 21.

At the Vibhag Pramukh meeting, leaders and party office-bearers from Mysuru, Mandya, Kodagu, Chamarajanagar and Hassan were present and the CM took feedback on the election strategy to be adopted to ensure the victory of party candidate M.V. Ravishankar.

The media was not allowed inside when the CM was interacting.

Addressing reporters soon after his arrival at Mysore Airport, the CM said that the State Government was in the process of appointing a Lok Ayukta and there will be no further delay in it.

Expressing confidence that all the BJP candidates will win in the Rajya Sabha elections, he said he has no idea about the strategies of Congress and the JD(S).

On the Tamil Nadu Government’s move to obstruct the Mekedatu drinking water project, the CM said, “Going to Supreme Court is not the right thing to do. The Court had issued us a notice and we have replied efficiently. Only the Supreme Court-constituted Cauvery Water Management Authority has the final authority to decide what projects must be taken up along the Cauvery Basin and what projects must be shelved.”