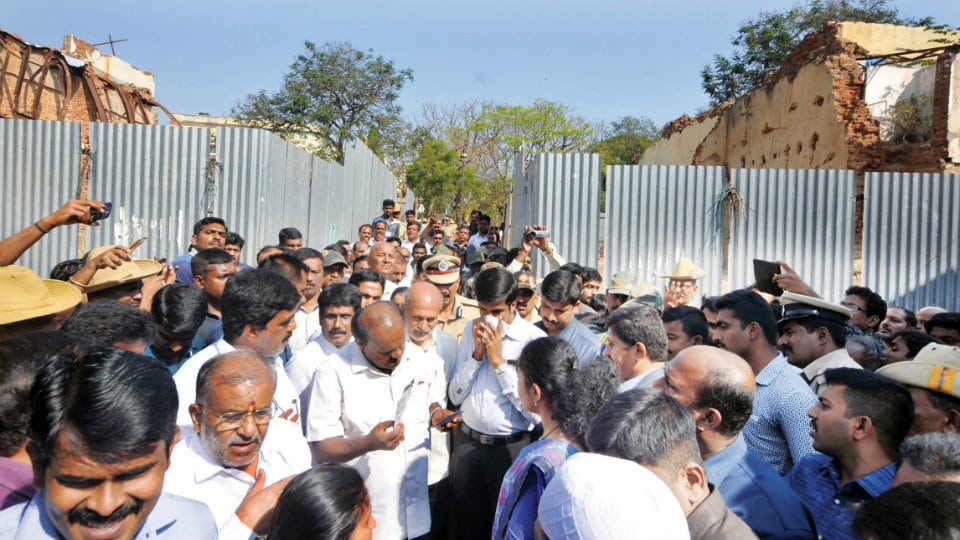 Mysuru: Chief Minister H.D. Kumaraswamy today categorically stated that the decision to preserve or raze the Devaraja Market and Lansdowne buildings will be taken only after holding a meeting with all the stakeholders.

The Chief Minister, who reached Dhanvanthri Road around 10 am, began the inspection of the Market from the North Gate entrance arch and met the traders and tenants who explained their problems and urged him to see that the Market, that is their livelihood,  is preserved.

They also told him how the scion of the royal family Yaduveer Krishnadatta Chamaraja Wadiyar and his mother Pramoda Devi Wadiyar were supporting the cause of the tenants to preserve the heritage market.

He assured them that their feelings would be considered but he could not take any decision on the spot in this regard as he had to talk to the officials, experts and others about whether to retain or raze the market.

When they brought to his attention that they had come out with a report which clearly stated that both the buildings should be preserved and they are fit for restoration, the CM told them that he had to weigh all the pros and cons and only then take a decision.

READ ALSO  A pleasant surprise to vendors and shoppers

Addressing the media later, HDK said that he would consider the views of all the stakeholders, keeping in mind the sentiments of the people towards the heritage structures and only then take a decision.

He also pointed out that there were contradictory reports one by the HIRC and another by the Government of Karnataka Task Force for Quality Assurance in Public Constructions. While the former urged for preservation, the latter suggested demolition.

Hence, he said that he would call a meeting of all those concerned with the two structures and only then take a decision.

The Chief Minister skipped visiting the Lansdowne building and went straight to T. Narasipur to attend the Kumbha Mela. He was also there last evening witnessing the Ganga Puja and Deeparati along with the Seers of various Mutts.