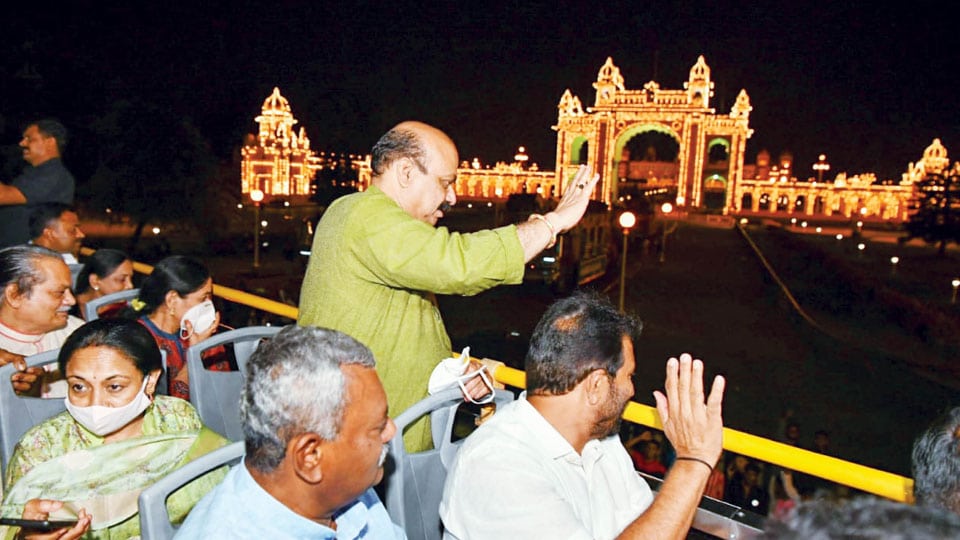 Chief Minister enjoys every bit of lights; waves at crowds from atop ‘Ambaari’ bus

Mysore/Mysuru: In a move that will go a long way in helping the tourism and hospitality industry, the State Government has extended the illumination of Mysuru city till Oct. 24.  The nine-day extension from today will help more tourists to enjoy the serial lights and lit-up landmarks.

Responding positively to an appeal by the stakeholders of tourism industry, Chief Minister Basavaraj Bommai told reporters after visiting Suttur Mutt yesterday that a decision has been taken to extend the illumination in view of increase in tourist footfall.

“I have come to know that a lot of visitors from various districts are thronging the city to watch the illumination which has been done well this year. Mysuru District Minister too has sought an extension and thus a decision was taken,” Bommai said.

Meanwhile, awed by the magnificent illumination, Basavaraj Bommai took an Ambaari (open double-decker bus) ride late at night to enjoy the splendour of the lit up city. Bommai boarded the Ambaari at about 11 pm at Hotel Radisson Blu Plaza, where he had stayed after inaugurating the Dasara procession.

With Dasara ending, Basavaraj Bommai has thanked the citizens of Mysuru for their whole-hearted cooperation. Speaking to reporters at Hotel Radisson Blu this morning before leaving for Hanagal, Bommai said that the Dasara celebrations were held in a simple and symbolic manner this year too due to COVID crisis.

“I have prayed to the almighty to end the pandemic  and facilitate holding of customary Dasara from next year with all its past pomp and gaiety,” he said. Asserting that the Government will extend all help for promoting tourism in the region with Mysuru-centric Tourism Circuit, he said that the Government will come up with concrete plans for further boosting tourism  in the Southern districts.

Referring to Dasara exhibition, Bommai said that the Dasara Expo must not be limited to just Dasara and the Government is working on plans to hold State and National level expos in the Exhibition premises throughout the year.

Ahead of inaugurating ‘Jumboo Savari,’ Chief Minister Basavaraj Bommai visited Suttur Mutt at the foot of Chamundi Hill in city on Friday afternoon and sought the blessings of Sri Shivarathri Deshikendra Swamiji.

Bommai received ‘Banni Patre’ from the Seer and conversed with him for some time. Earlier, Bommai offered puja to the idol of Goddess Chamundeshwari in the Mutt premises and was accorded a grand welcome by Priests.