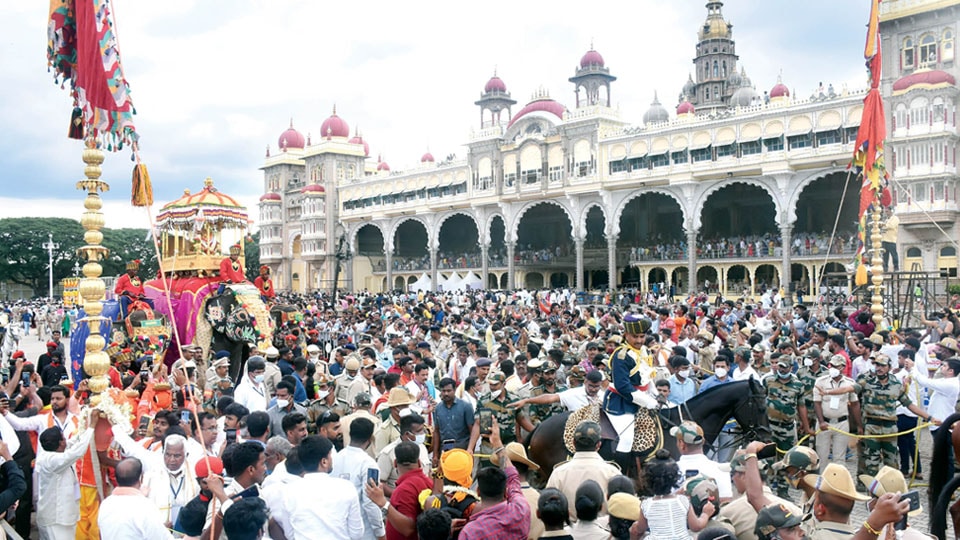 Mysore/Mysuru: The so called ‘strict instruction’ from the State Government to limit the crowds inside the Mysore Palace during Vijayadashami procession remained only on paper with politicians, Police and officials themselves flouting the rules in full public view.

In their enthusiasm to allow only a select crowd inside the Palace, they allowed each and every one who boasted about their powerful connections inside the Palace. Only the common man and tourists were left stranded outside the gates. Though the gates were closed, hundreds of vehicles claiming to be owned by the VIPs and their relatives entered the Palace and there was no one to stop them.

Rules applied only to the common Mysurean while all the others with connections had a field day inside the Palace and near the caparisoned elephants. As per conservative estimates, there were more than 10,000 people inside the Palace while an equal number was waiting outside just to get a glimpse of the passing ‘Jumboo Savari’ within the Palace fortress. Thousands of people converged at the Balarama Gate of the Palace to try their luck in seeing the procession.

In the instruction manual issued by the Government, it was mentioned that all the people including duty-bound Policemen who are entering the Palace premises must mandatorily have an RT-PCR test certificate.

This rule was given a go-by as many VIP SUVs were spotted ferrying relatives, friends and followers after the driver had a word with Policemen manning the Palace entry gates and no questions were asked.