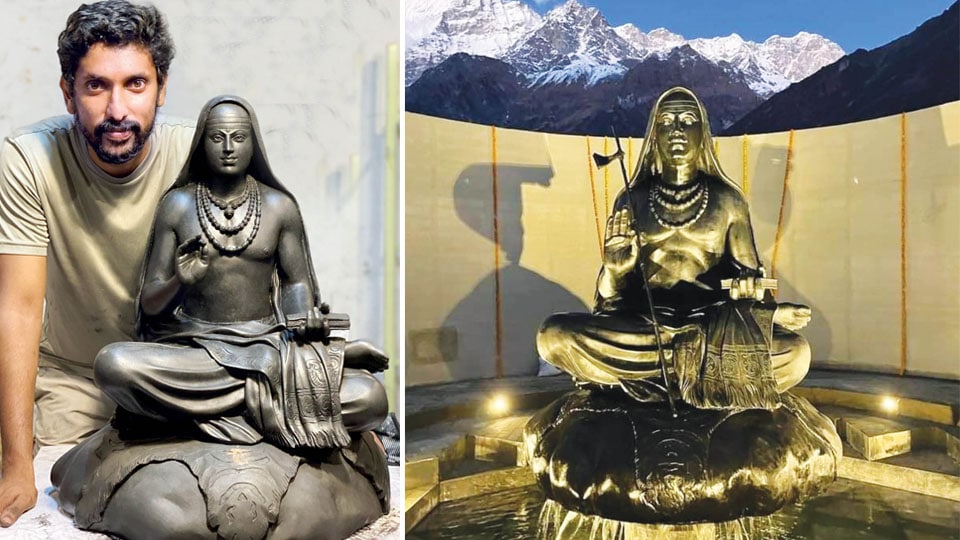 Mysore/Mysuru:  City sculptor Arun Yogiraj, who carved the 12-feet 3D statue of Adi Guru Shankaracharya in sitting posture — which was unveiled by Prime Minister Narendra Modi yesterday at the Kedarnath Temple in Rudraprayag district of Uttarakhand — is awaiting the biggest moment of his life of personally meeting Modi at his Office in New Delhi.

“I got a call from the Prime Minister’s Office (PMO) where an officer told me that the PM was impressed by the way the Shankaracharya statue was carved after months of painstaking work. The officer told me that Modi has expressed his wish to meet me in person,” Arun Yogiraj told Star of Mysore this morning.

The officer told Arun that the PM would have a one-on-one meeting with him soon and the dates would be informed in advance. “I am excited to meet the PM who is relentlessly striving for the welfare of his subjects and this would be the biggest moment of my life,” he said. “What is happier than the PM himself saying that he was impressed with the artistic statue,” the sculptor added.

The statue of Adi Guru Shankaracharya, which is made from Chlorite Schist Stone (Krishna Shile), has been reconstructed after its destruction in the 2013 Uttarakhand floods.

It took nine months of continuous work from Arun Yogiraj to sculpt the Adi Shankaracharya statue. “It was my privilege to sculpt the statue. The process started in August 2020 and I was selected to make a sculpture. Before that, I had made a model of two feet,” Yogiraj was quoted as saying by news agencies.

It was Jindal Steel Works which took up the project, and approached Arun and his father B.S. Yogiraj Shilpi. “I was given a 3D model photograph, but I was not happy. I did my own model after studying several statues and I prepared a 2-ft prototype,’’ he said.

“The model was presented in front of the PM in September 2020 and there were four-five models brought from all over India. Among those, my model was selected and I got a call to make a 12-feet statue of Adi Shankaracharya,” he added. Yogiraj said that a team of seven sculptors worked continuously for nine months around 14-15 hours a day to achieve the aim.

“The present statue weighs 28 tonnes. We concentrated on a 360 degrees view of the statue and gave importance to structure, posture, gesture, realistic part, traditional aspects, the divinity in the face among the rest of the things,” he said.

After completing his MBA, 37-year old Arun got a lucrative job but resigned soon after to take up his traditional work. “The PMO was personally monitoring the progress. We selected the black granite rock (Krishna Shile) from H.D. Kote in Mysuru. After the works were completed in July this year, it was taken to Uttarakhand,” he said.

The statue made its journey from the workshop of sculptor Arun Yogiraj in Mysuru’s Saraswathipuram to the Samadhi sthal in Kedarnath by road until Chamoli Airbase from where it was airlifted by the Indian Air Force to Kedarnath.  “I was supposed to be in Kedarnath yesterday but due to a tragedy in the family (Arun’s father passed away on Sept. 30), I had to return home a week ago,” he said.

The people of Nanjangud got to see the live coverage of Modi’s visit to Kedarnath yesterday and also the inauguration of the reconstructed Samadhi of Adi Shankaracharya. An LED screen was erected at Kalamandira, located adjacent to the Srikanteshwaraswamy Temple in the town, to facilitate witnessing of the live event.