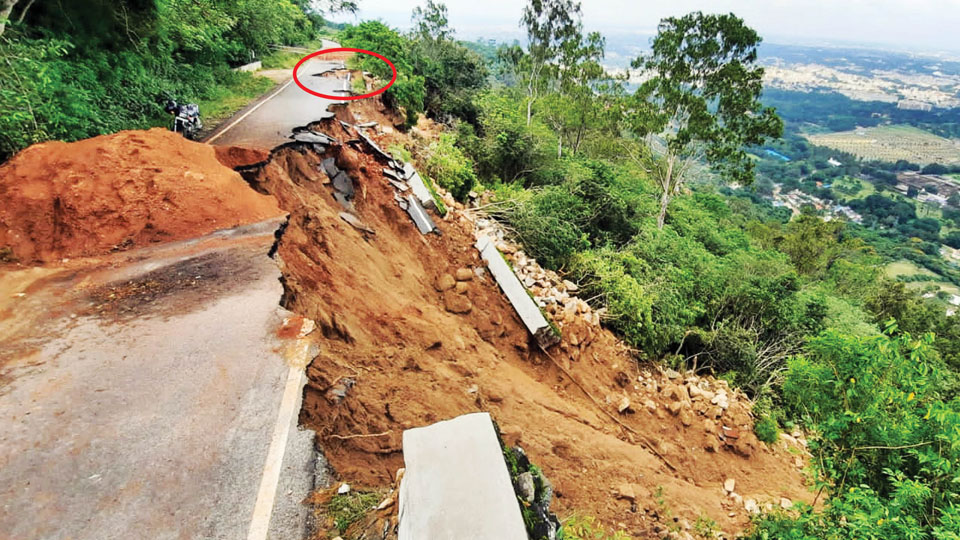 Mysore/Mysuru: Within a span of 18 days, a portion of Chamundi Hill — between View Point and Nandi Statue — has collapsed thrice, increasing the risk to motorists and villagers up the Hill. Though traffic has been closed on the collapsed stretch, gaping cracks at many places on the road, crumbling rocks and mud, river-like flow of water have caused deep safety concerns.  The first landslide occurred on Oct. 20, 2021 near the spot where a massive slip had occurred in 2019. It was presumed to be a minor slide and  authorities had expressed confidence that the stretch can be repaired as it was done in 2019.

But heavy rains and continuous water seepage belied the theory of ‘easy repairs’ and the landslide widened, shrinking the road by 80 percent on Oct. 31. Due to incessant rains, water flowed like a river from hilltop to several low-lying areas at the foothill including Gundurao Nagar, Pinjrapole and Race Course Road and one more landslide occurred on Nov. 4, just 10 metres away from Oct. 20 landslide area.

Here, the retaining concrete wall built during Wadiyar reign came crashing down along with boulders and mud and a steep gradient of loose soil has been formed and the road has become so unstable that one wrong step will lead to a fall into a ravine.

Following the series of landslides, the Public Works Department is seeking suggestions from the Indian Institute of Science (IISc.) in Bengaluru on repairs and restorations. Two scientists from the Geotechnical Engineering Department under Civil Engineering visited the spot this morning and collected soil and rock samples. This team had visited the Hill recently and today’s is their second visit.

The entire area of the slide has been photographed to ascertain the type of vegetation. IISc. sources told Star of Mysore this morning that the Geotechnical Engineering Department will ascertain the problems of foundations, road structure, underground factors, soil and rock media accounting the presence of seepage and other body forces.

Using geomechanics solutions, they will suggest restoration measures. Geophysical and geotechnical testing and engineering seismology, soil and rock stability, seismic hazard and site response would be studied in the laboratories of the Department and a detailed report would be submitted within a week.

“We will have to wait for IISc. report where a comprehensive retaining wall with a strong base will be suggested along with the technology to be used based on the soil and rock study reports. After we get the report, a proposal and estimate will be sent to the Government for fund release,” he added. Harsha said that the rain must completely stop for the repair works to be carried out. “There is no road there now as soil has caved in and it should dry at least for 10 days under hot sun. It is impossible to even take a two-wheeler, forget heavy machinery for repairs,” Harsha added.