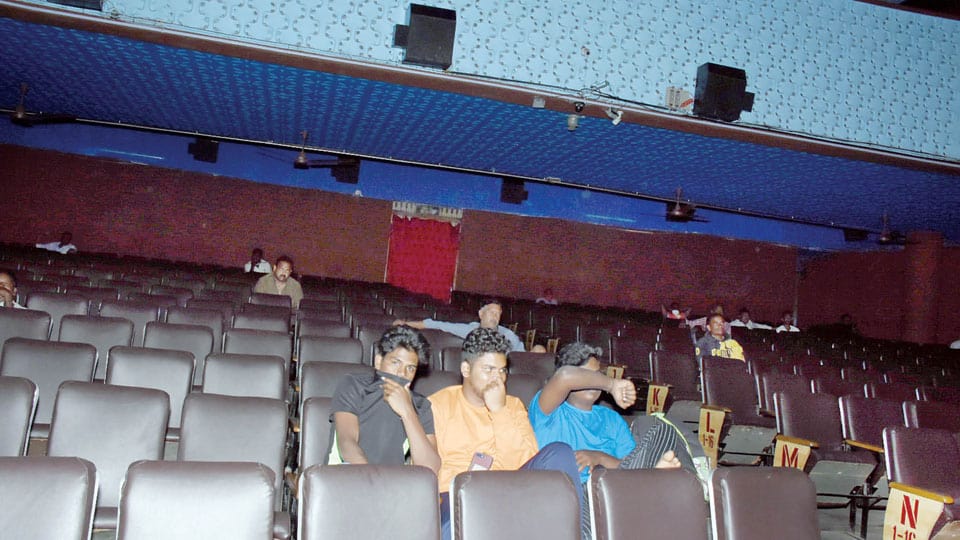 Mysore/Mysuru: The cinema fraternity has welcomed the Karnataka Government’s move to allow movie theatres, gyms and swimming pools to open at 100 percent occupancy from Feb. 5 (today). Accordingly, movie-goers were welcomed with open arms for the morning and noon shows today, albeit with precautions.

Film industry has been demanding the Govt. to allow cinemas to operate with 100% capacity as the industry has incurred huge financial losses owing to pandemic-related restrictions. Earlier, hotels, pubs, bars and restaurants were allowed to operate at full capacity.

Gayatri Talkies owner M.R. Rajaram, who is also the Vice-President of Karnataka Film Exhibitors Federation, told Star of Mysore that the Government’s decision would save the livelihood of thousands of people who are dependent on the cinema industry. “We have been abiding by all restrictions and precautions and we will continue to do so,” he said.

In Mysuru, the single-screen theatres had suspended shows following the earlier 50 percent rule while a couple of them including Shanthala Theatre, Sri Nagaraj and Lakshmi Theatre were closed permanently.

“Lifting of restrictions will also enable producers to release new movies and already, film release schedules have been drawn up. Without new movies, it will be difficult to hold the audience’s interest. We hope that things will look up for the industry in the coming days,” Rajaram said.

Theatre owners will have to follow certain guidelines that include ensuring that masks are worn by everyone at the theatre. Food items such as snacks will be banned inside the theatres. To ensure compliance, officials will visit the theatres whenever they want. If the theatres are not following this, action will be taken against them. To enter all these places, one must be vaccinated with both doses.

Swimming pools opened today after a long gap. Enough precautions were taken at the entrances before allowing the swimmers inside at the Saraswathipuram swimming pool owned by the University of Mysore. Likewise, swimming pools inside hotels, clubs, resorts and sports clubs too opened today.

Mysore University Registrar Prof. R. Shivappa told Star of Mysore that as the Government has relaxed more restrictions, walking will be allowed on the banks of Kukkarahalli Lake in the mornings and evenings. Till now, the gates of the walking tracks were closed. Now gates will be open on all days, he added.

Mysuru choultry owners have demanded full freedom to admit people to meet their full capacity. The Government has limited the entry to 200 (indoors) and 500 (outdoors) but has relaxed all other restrictions in all sectors. “This is unfair,” said Mysuru Choultry Owners Association President Sathyanarayana.

“Choultry owners in Mysuru district have suffered huge losses and are under deep financial crisis. A majority of marriage parties have cancelled ceremonies scheduled at choultries and are performing in a simple manner at houses and temples. Nearly 15 choultries have been closed permanently. The Government must support our cause and lift restrictions,” he said. Mysuru has over 85 choultries and 60 of them are within the city limits.