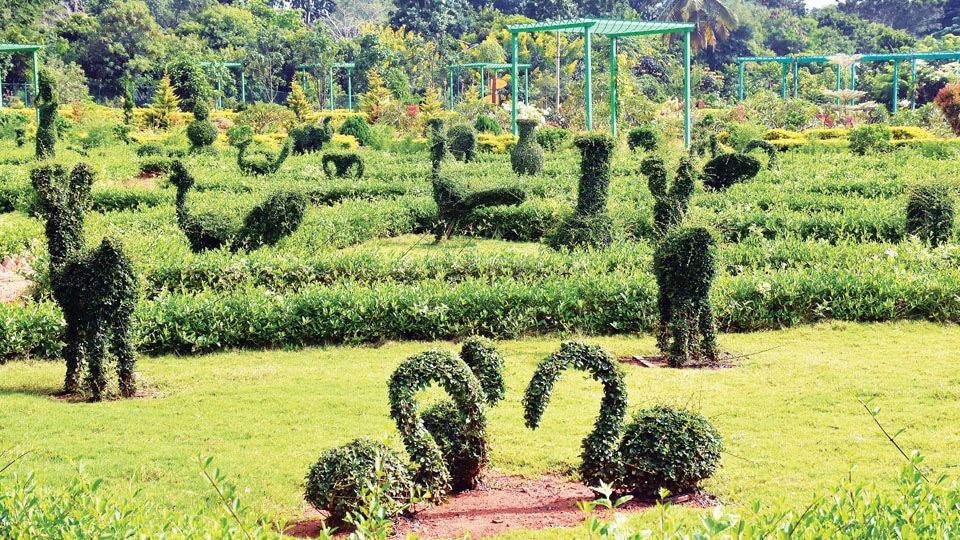 Mysore/Mysuru: Mysureans are lucky than others to have natural water bodies, parks, boulevards and green canopy in city, thanks to the vision and generosity of the rulers of erstwhile Mysore kingdom.

Mysuru will soon get its first Botanical Garden which is all set for inauguration at the scenic Lingambudhi Lake in Srirampura II Stage, Ramakrishnanagar.

With a view to giving a new look to this natural water body, the Horticulture Department has developed a beautiful Botanical Garden on 20-acre land of the total 30-acre handed over by the Forest Department.

This Garden not only has over 450 varieties of plants but also has endangered natural species and medicinal plants. Once formally opened, it will definitely emerge as a natural study centre for Botanists, Zoology students and others who have keen interest in natural resources.

The Forest Department has conserved naturally grown trees which feed the birds. Besides, several new saplings are planted which not only add beauty to the Lake but also provide food and shelter to countless number of winged visitors.

Inside the Garden, there is walking path, jogging area, resting place and stone mantap to give a natural look. A large number of cherry fruit trees are planted to attract butterflies to the butterfly park like the one at Karanji Lake in city. This park will be developed as the butterfly breeding centre.

The entry fee to the Botanical Garden is likely to be Rs.10 or Rs.20 per head, and it will be open for public between 8.30 am and 5 pm. The entire Park has been declared ‘no-plastic’ zone. Once fully developed, it will emerge as a ‘knowledge hub’ for many people. A 24 X 7 watch and ward will be appointed to check illegal activities.

However, one of the major concerns has been the flow of untreated sewage water into the Tank from the surrounding areas like Aravindanagar, Dattagalli, Ramakrishnanagar, apart from water from Rajakaluve. This has posed a threat to the very existence of this water body. Any failure to address this problem will totally pollute this Lake, warned a nature-lover.

It may be recalled, there were plans to create a 33-acre Botanical Garden near Lalitha Mahal Palace Hotel some years ago but it did not materialise.

Argentea: Celosia argentea, commonly known as the plumed cockscomb or silver cock’s comb, is a herbaceous plant of tropical origin, and is known for its very bright colours.

Plumeria: It is a genus of flowering plants in the family Apocynaceae. Most species are deciduous shrubs or small trees.

Topiary: The art of practice of clipping shrubs or trees into ornamental shapes.

Rockery: A rockery is a raised part of a garden which is built of rocks and soil, with small plants growing between the rocks.

Ficus: A genus of about 850 species of woody trees, shrubs, vines, epiphytes and hemiepiphytes in the family Moraceae. Collectively known as fig trees or figs.

Horticulture Minister K. C. Narayana Gowda visited the Botanical Garden on Oct. 17 and went around the Lake area. Senior officials from the Department explained to him the concept on which the Garden had been created. The formal inauguration is likely to take place next month.