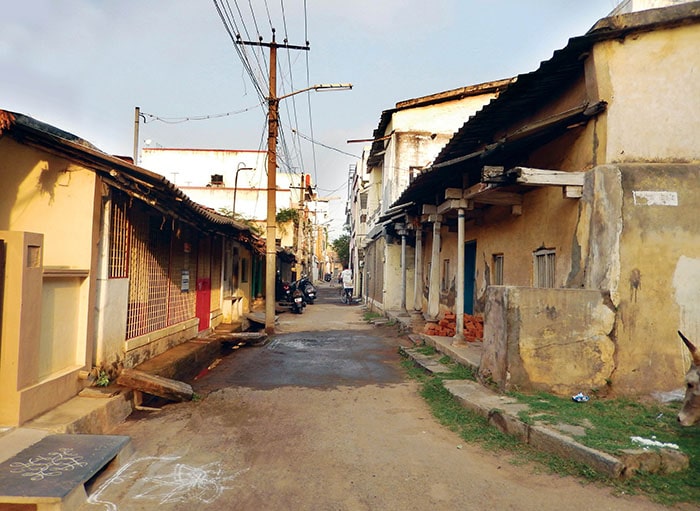 There is an Agrahara in Mysuru with a name that sounds somewhat strange. Though this is an old Agrahara, like the other Agraharas in city, its name does not match with the names of other Agraharas. And that is Kathvadipura Agrahara as generally called though its actual name is ‘Kathvadipurada Agrahara.’ This Agrahara is in Fort Mohalla.

Except for three or four Agraharas, most of the other Agraharas in Mysuru have the names of the wives of the Maharajas. They are either constructed by the queens themselves or built in their honour. Only a few Agraharas built in the later years have names not related to them like the Sreenivasan Agrahara and the Ramachandra Agrahara. But how did this Agrahara, with a distinctly different name not related to any of these, get its name?

From Nanjangud to Mysore

Krishnaraja Wadiyar III built many Agraharas in Mysuru. He also established Agraharas elsewhere in his domain. One such Agrahara was built in Kathvadipura village on the banks of the river Kapila in Nanjangud taluk. The Agrahara with seventy-four houses was established on Sunday, August 1, 1819. The Maharaja had bestowed these houses to many scholars and ‘Srotriya’ Brahmins. He had also bestowed upon them ‘Vrttis’ for their sustenance. The king had named the Agrahara as ‘Krishnarajendrapura Agrahara.’ Among the beneficiaries was one Rama Sastry, a scholar and ‘Srotriya’ Brahmin. Rama Sastry in turn had given his house and his ‘Vrtti’ to a “selfless and noble individual” father of one Venkatarama Sastry.

It so happened that sometime after these Brahmins had settled down in this newly-built Agrahara, their houses became easy targets for thieves. Frequent thefts began to occur in their houses. The families had to live in fear for their lives and loss of valuables. Helpless, the residents approached their master, the King, and complained to him about the frequent thefts and the losses they were suffering, besides threat to their lives.

In response to their complaints, kind-hearted Krishnaraja Wadiyar III decided to accommodate them in his city itself. Accordingly, he got constructed a new Agrahara to the South-West of the Palace in Mysore and bestowed it to those Brahmins who were apprehensive of living in the new Agrahara in Kathvadipura village.

Happy they found a safe place to live, the Brahmins migrated from Kathvadipura to the Agrahara newly-built for them in Mysore, near the Palace Fort. The Agrahara came to be called ‘Kathvadipurada Agrahara’, the Agrahara of Kathvadipura. Anyone who visits Fort Mohalla can see this Agrahara continuing to bear the name of this village which exists in Nanjangud taluk. If one closely observes the stone tablet on the walls of this Agrahara, he can see it inscribed there as ‘Kathavadipurada Agrahara’. Many of the residents here continue to be Brahmins.

This is how the Kathvadipurada Agrahara came into existence in the King’s capital. This benevolent act of the Maharaja was recorded by Rama Sastry, who had gifted both his house and ‘Vrtti to the father of Venkatarama Sastry.

This Agrahara to the West of Mysore Fort and close to Rama Vilasa Agrahara, Lakshmi Vilasa Agrahara and Krishna Vilasa Agrahara, named in honour of the three queens of Krishnaraja Wadiyar III, must have been constructed between 1819 and 1921. The value of each ‘Vrtti given to the Kathvadipura Agrahara residents was 37 Varahas, the currency which was in circulation during the Maharaja’s reign. The construction of Kathvadipurada Agrahara shows the concern the Maharaja had for his subjects and his timely help when they faced hardship.

There is also a ‘Laya’ (Kudure Laya) in the Fort Mohalla having the name of Bakshi Basappaji. It is named ‘Bakshi Basappaji Layada Rasthe’ about which a reference had been made in one of my earlier articles. Probably, this road, where once horse-shoes were being made, was leading to the horse stables of the Bakshi. The Mysore Urban Development Authority (MUDA), which was constituted in 1903 as the Trust Board, had formed the ‘Bakshi Basappaji Urs Garden Extension’ adjoining the Chamundi Extension. It contained 91 sites and was formed in 1915 at a cost of nearly Rs. 13,000.

Bakshi Basappaji Urs was the brother-in-law of Maharaja Chamaraja Wadiyar. When Chamaraja Wadiyar was married, the Maharaja’s age was fifteen and that of the bride, Kempananjammanni, daughter of Narase Urs of Kalale family, twelve. The Maharaja arrived in front of the Palace for the marriage, after a procession seated on an elephant with his two brothers, Gopala Raj Urs and Subramanyaraj Urs, on either side. The procession passed through the four streets of the Fort of Mysore. It was Bakshi Basappaji Urs who received the bridegroom’s party with all paraphernalia and conducted the Maharaja to the marriage pavilion on the morning of May 26, 1878.

While the royal family was still caught in the sad scenario, the Viceroy of India, Lord Elgin, accompanied by the Countess of Elgin and Lady Elizabeth Bruch, visited Mysore. Bakshi Basappaji Urs, then First Assistant to the Resident, the District Superintendent of Police of Civil and Ministry Station, accompanied them to Bangalore on November 19, 1895.

One man many posts

Bakshi held many posts while in service. He was also a Minister and Treasurer of Krishnaraja Wadiyar III. He accompanied the Maharaja during his crucial visit to some places in the kingdom, when there was an outbreak of insurrection in parts of Nagar, Chitradurga, and Bangalore in 1830, and assisted in redressing the grievances of farmers in those places. A discontent of a serious nature had cropped up due to the abuse of the Sharat system and harassment of farmers. It first cropped up in the Nagar division and then spread to a few other places, incited by certain powerful persons, who tried to take advantage of the situation.

To effectively curb the rebellion and resolve the discontent of the farmers, Maharaja Krishnaraja Wadiyar III decided to undertake a personal tour in some of these affected places. Accordingly, he began his tour in December of that year from Channarayapatna. He was accompanied by Bakshi Basappaji Urs and he played a significant role.

During his tour, according to M. Shama Rao, author of ‘Modern Mysore’, the farmers of Kikkeri were seen standing in large numbers on a rising ground armed with swords, sticks and slings and also horns and drums. The British Resident of Mysore, Cassamaijor, who saw this, advised the Maharaja to direct the removal of the instruments which the assembled people had in their possession.

Basappaji Urs carried out the instructions given to him and also brought ten people to the presence of the Maharaja. “Among them was one Kusappa who had formerly been a Government official but had now placed himself as a leader of the insurgents and this individual was ordered to be detained in custody. The Amildar of Kikkeri was on enquiry found guilty of oppression and the seals of his were accordingly taken away from him. The farmers were assured that a new Amildar would enquire into all their grievances. Some of the principal farmers were then given a repast of milk and rice in a tent and others were supplied with split pulse and jaggery with flattened rice and curds.”

This highlights the crucial role played by Basappaji Urs both during the reign of Krishnaraja Wadiyar III and subsequently of Chamarajendra Wadiyar. The Bakshi’s kins take pride in recalling their relationship with Basappaji Urs.

Now let us go to Lashkar Mohalla to see a street named after an Amildar, who was in the service of the Maharaja’s Government. This street is from the Van Ingen’s house connecting the Five Lights Circle near the Government Guest House. It is named Dawood Khan Street.

But who is this Dawood Khan? Records say Dawood Khan was an Amildar during the period of Krishnaraja Wadiyar IV. During those days, each taluk had a headman called Amildar. Dawood Khan was one such Amildar. He lived in a house on this street. But the house was sold sometime later and his great-grandson moved to Bengaluru.

Except for this piece of information, no more details are available about this Dawood Khan and why the street bears his name. Perhaps, Dawood Khan was a popular Amildar and a prominent personality among the Muslims residing here. Hence the street might have become popular by his name.

4 COMMENTS ON THIS POST To “Kindly King and Kathvadipura Agrahara”