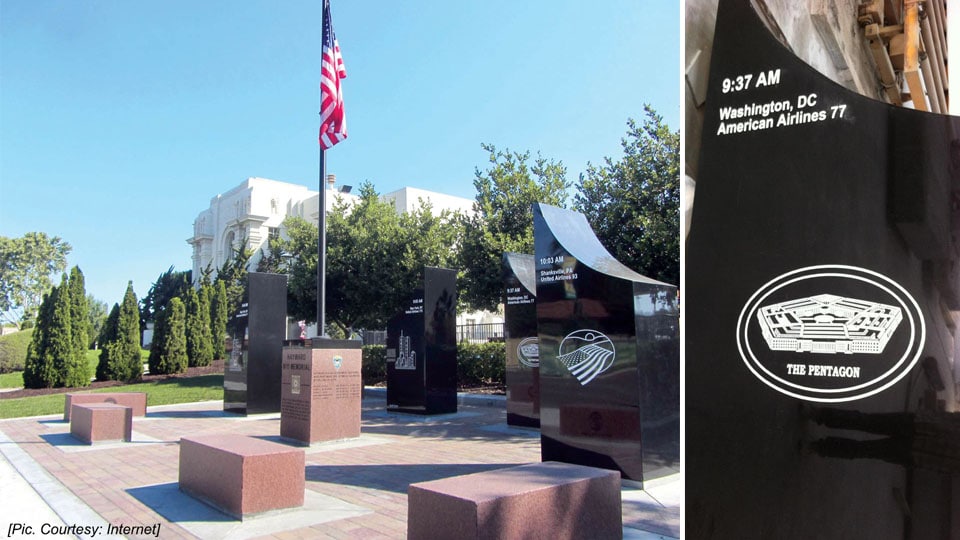 Leaving no stone unturned for a Memorable Memorial

India has always enjoyed the position of a world leader in granite exports. Adding unmatched style and elegance to the architecture, the glossy, smooth Indian granite has been extensively used stone material in building classic memorials across the globe — Vietnam War Memorial and Bruce Lee Memorial in Washington DC, Atomic Bomb Victims Memorial at Hiroshima in Japan are a few monuments made of Indian granite.

The memorial, opened on May 30, 2016, honours both those lost in the 2001 terror attacks in the US as well as Hayward Police and fire personnel who have fallen in the line of duty throughout Hayward city’s history. The memorial is based on the vision of Fairview resident Michael Emerson, a US Marine Corps Desert Storm veteran and graduate of CSU East Bay, who has developed a reputation for producing public memorials.

The memorial features a series of four sculpted granite monoliths representing each of the planes involved in the 9/11 attacks. The monument is about the four different planes, those on-board the planes and those who were killed and affected by each. It features four 10-feet tall, 4-feet wide and 3-feet thick black granite monoliths.

The memorial features red granite benches, with the words “WE WILL NEVER FORGET” paved in grey brick in the centre. A flag stands in the middle, reaching up from the centre stone dedicated to the fallen public safety officers of Hayward.

Inscribed on the back of the monolith for American Airlines Flight 77 are the names of 164 members of the military from Hayward killed in action, dating back to the Spanish-American War in 1898. The memorial also includes six stone benches purchased by donors for six military organisations in the US.

The black granite that is adding sheen to Hayward memorial has been mined from Kothalavaadi quarry in Chamarajanagar District that has a vast treasure of granite mines spread across thousands of acres. The shiny stone has been mined by SVG Exports and the company exports the granite in 25 to 30 containers (each container can carry 24 tonnes) every month.

The company, owned by Adi Srinath and Adi Bhaskar, began quarrying at Kothalavaadi in 2012 and along with superior quality black granite the company also exports red granite stone. The inscriptions on the granite and the names of fallen officers have been engraved before being taken to the US at the SVG Exports factory and cutting centre under the supervision of Manager Sudarshan. Names of donors for the memorial too have been carved.

The cut, sized, polished and shaped granite stones including the foundation stones were sent to the US in January 2016 from Bengaluru to Chennai Port via goods train and later shipped to California in a 30-day journey.