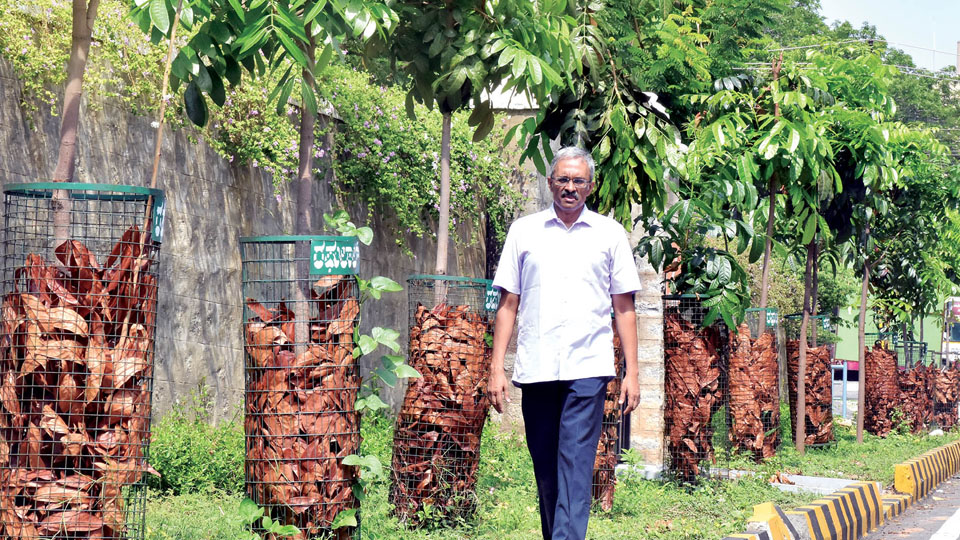 At a time when hundreds of trees are being felled in the name of development and infrastructure projects in city, a green warrior has been contributing his mite silently for the expansion of green cover by planting and nurturing hundreds of trees.

N. Raghavan, proprietor of Raghulal and Co., a Pharmacy company in city, apart from planting thousands of trees, is also functioning as a tree saviour by donating tree guards. He has been providing tree guards to saplings planted by the Forest Department and other organisations for the past 12 years. Raghavan, who has so far donated over 27,500 tree guards, also waters plants with the help of tankers.

In a major initiative, Raghavan, after planting thousands of saplings in the vicinity of Lalitha Mahal Palace has also guarded them with tree guards. More recently, he planted hundreds of Terminalia plants near the multi-level vehicle parking atop Chamundi Hill. He has also secured them with tree guards.  Sri Chamundeshwari Temple Executive Officer N.S. Yathiraj Sampathkumaran said that Raghavan has also come forward to plant a variety of fruit trees atop the Hill.

Speaking to Star of Mysore on the occasion of World Earth Day (Apr. 22), Raghavan said that on this day, everyone should take a pledge to plant and nurture at least a couple of saplings in their house or surroundings.

Pointing out that he is planning to provide 6 ft. tall bamboo guards, with their bottom tarred to prevent termite attack, he said that he is joining hands with the Forest Department for watering plants during summer.

Noting that a real-time GPS App has been created in connection with watering plants, he said that this App will provide exact information on where all the plants have been watered.

Stating that while some organisations seek help for both planting and nurturing, some others seek only tree guards, Raghavan said that there are no permanent workers in this initiative. Available workers will be engaged only when required, he said and added that his first priority is plants such as Mahogany, Nandi, Basavanapaada and Kaadabadami, which provide food to livestock.

Bharathi Yogadhama Convenor Sundaresh Sathyanarayana said that Raghavan has provided more than 500 guards for a variety of plants that have been planted in the Yogadhama premises near Uthanahalli at the foot of Chamundi Hill. Pointing out that there are plans to plant 500 more saplings in the near future, he said that Raghavan has assured to provide tree guards for them too.

S.K. Bhaskar, President of Sapthamathruke Temple Trust in Vijayanagar Third Stage, said that Raghavan has provided tree guards for all saplings planted in the temple premises, which has been named as ‘Aarogya Vana.’

Stating that the temple is maintaining the MUDA Park next to it, he said that more than 160 varieties of medicinal saplings and flower plants have been planted in the park with MUDA’s permission. Also, more than 20 plants of different species have been planted outside the park and Raghavan has provided guards to all of them,he added.

J.P. Nagar Lions Club Secretary Siddalingappa said that Raghavan has provided guards to over 600 plants planted on the median of M.S. Gurupadaswamy Road in J.P. Nagar. Also, Raghavan, along with former Mayor B.L. Bhyrappa, has helped in planting a variety of saplings along the road that connects J.P. Nagar with Silk factory at Ashokapuram, he said and added that H.V. Rajeev Sneha Balaga had donated the saplings. Recalling that Rajeev Sneha Balaga has also taken up the responsibility of watering and nurturing these plants at a cost of about Rs. 40,000 per month, Siddalingappa while thanking the help and support rendered by Raghavan, said that he also promised continued support for the Club’s future plans on greenery.

Deputy Conservator of Forests (Urban Forestry) Prakash said that Raghavan is always ready to provide guards for protection of trees anywhere. Stating that Raghavan has donated over 4,000 tree guards last year, he said that each tree guard costs about Rs.900. Also, removing the tree guard after the tree is fully grown is a difficult task and as such, he had suggested bamboo guards, which hardly costs about Rs.140 each.