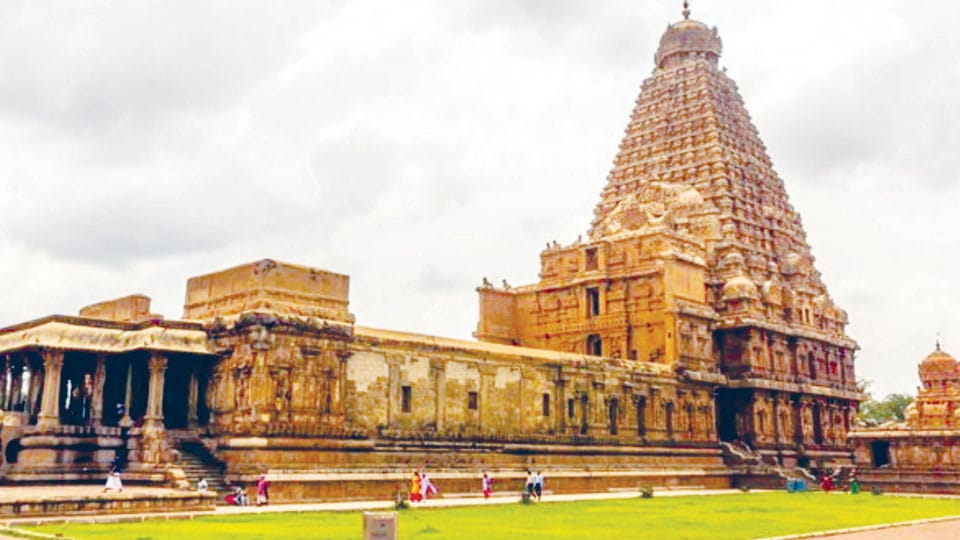 Brihadeeshwara temple is located in Thanjavur town which belongs to Tamil Nadu. It is a great tourist centre and thousands of visitors both from abroad and India visit this temple and they stand in silent awe seeing this magnificent temple. I had the good fortune of taking many distinguished visitors to this temple as I was working in Thanjavur. The top officers of the Archaeological Survey of India (ASI), New Delhi, were deputing me to do this job. It was my good fortune that I was able to understand the minute details of this great temple.

Brihadeeshwara temple has a hoary antiquity going back to the Puranic times. Thanjavur was also called as Parashara Kshetra because, long time ago, this place was notorious for a demon called Thanjan. When Vishnu killed this demon Thanjan, the latter, before being killed, requested Vishnu that this place be named after him as Thanjapura, as an atonement for the series of crimes committed by him. In course of time, this place became famous as Thanjavur (Thanjan vuru).

There was an ancient Palace to the Northern side of this temple which consisted of Saraswathi Mahal  library with old books and palm-leaf manuscripts. During the rule of Maratha Serfojis (kings) about thirty thousand old books and eight thousand palm-leaf manuscripts dealing with astronomy, medicine and astrology were available in addition to these palm-leaf manuscripts  written in Tamil, Telugu, Marathi and Sanskrit scripts. It also had a pond named Shivaganga  established in the year 1778 by a Christian missionary by name C.F. Shwartz. It included a church (Shwartz church) and a beautiful garden with colourful flowers.

Thanjavur is famous for carpets of different colours, and musical instruments as well as copper vessels which are in great demand both in India and abroad. Gold leaf work is another addition to the fame of Thanjavur which includes gold painted coconuts which are used to welcome distinguished visitors like Governors, Ministers, Chief Police Officers and Judges. The grandeur of Thanjavur is confirmed by many stone inscriptions as well as copper plate inscriptions. Thanjavur has many temples built during the rule of the Cholas.  However, the Brihadeeshwara temple is the main attraction at Thanjavur.

Brihadeeshwara temple was built in 1010 A.D. during the time  when Chola Rajaraja  was ruling. This temple is very magnificent and it has become a mirror to the architects and sculptors of this temple. Further, this temple is a touchstone for Dravidian architecture and sculpture.

As the name itself signifies, it has been built in an enclosure which measures 750x250ft. Brihadeeshwara temple is 150 ft. tall and 90 ft. in breadth and the height is 200 ft. This is the tallest temple in the whole of South India. Though this temple is built of granite, the sculptor had made it very soft so that many minute sculptures have been carved. This is not only a challenge to the architects but also to the sculptors. This temple consists of Garbagriha (sanctum), Pradakshina Patha (circumambulation path), giant enclosure and a separate Nandi  Mantapa, as Nandi  is the vehicle of Brihadeeshwara. All these various structures are in a line so that Brihadeeshwara  can be seen by his devotees from all angles.

The tower consists of many niches (Kudus) which adorn the sculptures of Dakshina Moorthy, Chandeshanugraha Moorthy, Ardhanareeshwara, Bhikshatana Moorthy, Chandrashekhara and other sculptures. It should be remembered that Shiva is one and the same but has been shown in various postures depending upon the circumstances.

The stone image of Nandi in Nandi enclosure is one the biggest Nandi images in the whole of South India. Similar smaller Nandi images are found in Chamundi Hill (Mahabaleshwara) and Lepakshi as well as Nanjanagud.

Inside the Garbhagriha  is a tall Shiva linga. It is tall as well as majestic. That is the greatness of this Shiva linga. Daily three times the worship takes place as prescribed by the Shaiva texts. These three worships are in early morning, the second by about the noon and the third is in the evening. Shiva is worshipped by milk, curd, honey, plantain fruits. Actually Shiva is fond of Abhisheka  pouring over substances like milk, curd, honey and dry fruits followed by pure water.

The evening worship is especially important because of Sandhya Tandava as it is called. Shiva uttered some words like ai, einuk, ri, la, ha, ya, Varat etc., and the best Sanskrit Pandits could not understand these words and their meaning. Hence, Shiva saw the miserable plight of these scholars and asked the great grammarian and Sanskrit scholar, Panini to explain these words which came out of the mouth of Lord Shiva. Thus all the alphabets of Sanskrit language came into being and later, scholars in Tamil, Telugu and Malayalam followed suit. This reminds us the devotees of the famous  dancing Nataraja image at Chidambaram temple. During the three-time worship the devotees are blessed with pure white ash (Vibhuti) and the devotees smear this all over their body and put a pinch of this ash into their mouth and feel blessed.

During the period of the Cholas, many donor-devotees gave gold ornaments, fertile lands and money. Fortunately, all these details are carved on the basement. Thus, the sculptors of the period of Rajaraja have taken all precautions by carving all the details of the gifts so that all the gifts are in tact and meant only for Brihadeeshwara temple.

During the period of Rajaraja I (984-1014), Thanjavur  was the capital of the Cholas. Later Rajaraja  changed his capital to Gangai Konda Cholapuram. Hence, the importance of Thanjavur automatically becomes less. Due to the invasion of Malik Kafur, Thanjavur became a part of Vijayanagara empire. Hence, during this period the temple was improved. One of the forts of Thanjavur is still intact. In 1674 AD, it came under the rule of Maratha kings. In 1799 AD, Maratha King Sarfoji  gave it to British East India Company and Thanjavur completely merged with British emperors. There is one more aspect which is worth mentioning. The kalasha weighs about 80 tonnes and taking it to the top of the temple is almost a miracle. It has been moved by an inclined plane. This is a mirror to the technical skill of the sculptors of Thanjavur.

There is a lesson to learn to all of us. Building any temple or fort or city is easy, but developing them is difficult because of various reasons. Hence, the Dharmotthana Trust constituted by Dr. Veerendra Heggade is not for building new temples but to help the ancient temples by giving money and gift of lands. That is the need of the hour. However, all the devotees are extremely happy that Brihadeeshwara temple with its Nandi Mantapa  is well preserved. The devotees of almighty are one and the same, but wise men call him by different names such as Shiva, Vishnu, Igguthappa etc.

It is our good fortune that this monument is being preserved by the Archaeological Survey of India (ASI), New Delhi. They have experts in various fields and the devotees need not be anxious about this Brihadeeshwara temple. All that we can do is to be grateful to ASI with a request to preserve this as a heritage monument, along with its paintings.

[Based upon the present author’s experience as an officer in the ASI, New Delhi]