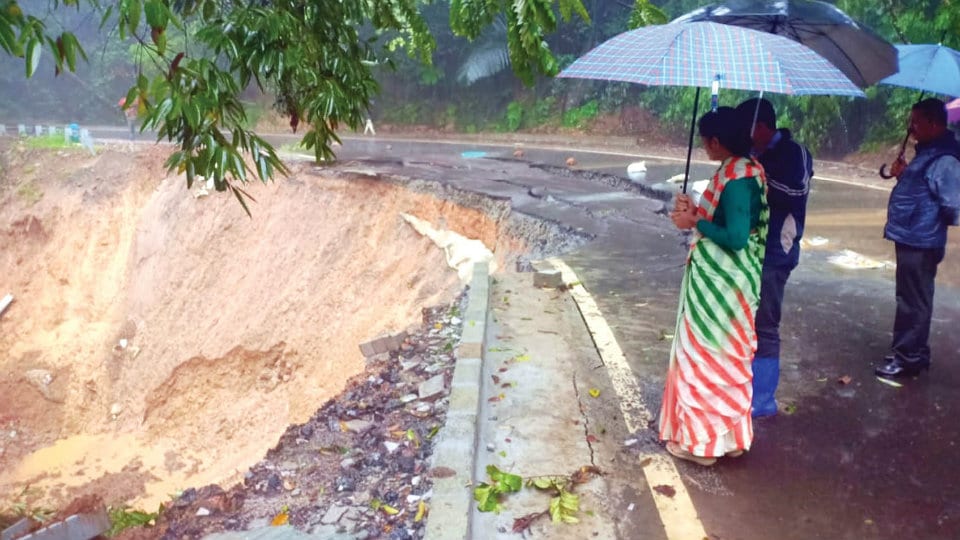 Clouds open up in Kodagu

Virajpet/ Madikeri: The dark clouds have finally opened up in Kodagu after a long break and it has been raining heavily since the last three days. Rains, accompanied by landslides, have caused extensive damage to the district and normal life has been severely affected. Trees have been uprooted at many places cutting off power lines and roads have caved-in blocking the smooth passage of vehicles.

The crucial link between Kodagu and Kerala via Virajpet has been severed as landslides have been reported with the highway caving-in at Vaatekolli near Perumbadi. Following the landslides, the Kodagu District Administration has banned vehicular traffic on this road for the next three days. The ban will be extended or withdrawn depending on the situation.

This morning, Deputy Commissioner Annies Kanmani Joy, accompanied by a team of officials, visited Vaatekolli. Vehicles moving towards Kerala have now been diverted via Gonikoppal, Ponnampet, Kutta to reach Manandavadi in Kerala. Many travellers from Kerala towards Virajpet and from Virajpet to Kerala take this road and as Virajpet is a commercial hub, most of the goods and vegetables come from Kerala. All the supplies have now been disrupted.

The Makutta River is likely to overflow in a day or two. According to local residents, water that will gush from the thick forest and hilly areas on the sides of the Makutta Road will cause extensive damage. Also, the connection between Napoklu and Kakkabe and between Bhagamandala and Ayyangeri has been snapped. The two roads are covered by three feet of water, cutting off traffic.

Water level in Cauvery River is rising rapidly at Bhagamandala and the District Administration has sounded an alert among tourists and those who are staying near the forest areas. The weather report by India Meteorological Department has warned of heavy rain from Aug.5 to 8 in the interiors of Kodagu and more at other places in the district.

Authorities said that holidays for schools and colleges will be declared depending on the situation. At Karadigodu and Nellihudikeri near Siddapur, River Cauvery is flowing in full spate and those living on the banks of the river are likely to be moved to food and rehabilitation centre, officials added.

At Gonikoppal, the Keerepole is overflowing above the danger mark and water has entered over 12 houses. Some hutments alongside the river have been submerged. The Lakshmanatheertha River has swollen and the old bridge across the river at Nittoor village is likely to submerge. Lakshmanatheertha is a tributary of Cauvery.