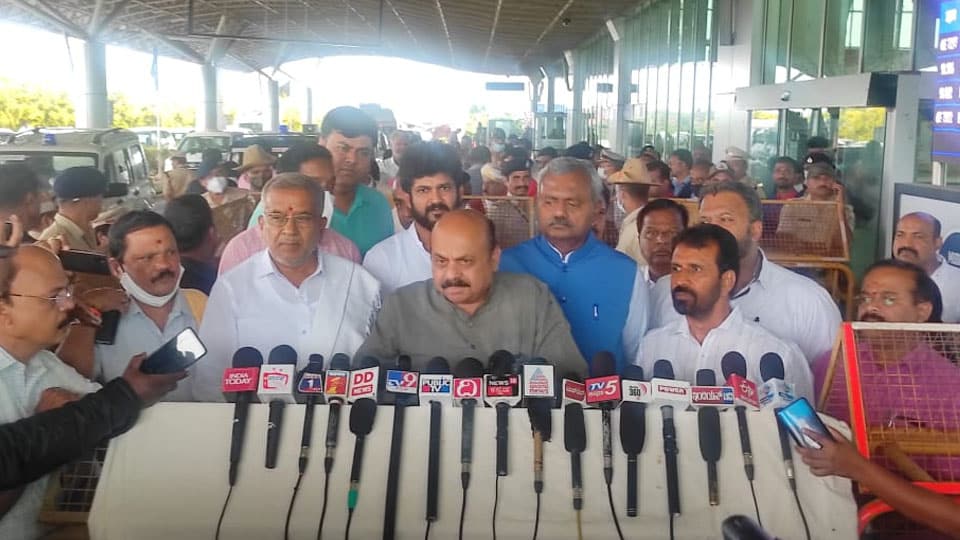 Mysore/Mysuru: Chief Minister Basavaraj Bommai has said that flood-affected people and people living in higher altitudes will be shifted to temporary relief camps.

“There is no proposal for permanent relocation of flood-prone villages in Karnataka,” he clarified. Bommai was speaking to reporters in the city yesterday where he had come to attend a private event.

“In 2009, after a massive flood caused havoc, 60 villages were permanently relocated. But people returned to their earlier habitations once the flood waters receded. We are considering the option of building well-equipped rehabilitation centres in higher locations along the river banks and low-lying areas so that people could be shifted there whenever they are affected by floods,” he said.

“I have instructed the DCs to survey the flood-prone areas of the State to assess whether the residents needed to be relocated temporarily they have been told to take up rescue and relief works immediately. Those residing in low-lying areas would be shifted to safer places,” he said.

Revenue Minister R. Ashoka is in Madikeri to oversee the relief works. All precautionary measures have been taken. The Deputy Commissioners were instructed to make alternative housing arrangements for those whose houses have been damaged,” Bommai said.

Replying to a question on coastal erosion, Bommai said, “New technology is available to tackle coastal erosion. It would be used on an experimental basis. NDRF and SDRF teams have been deployed for rescue operations. Funds are not an issue for relief works as Rs.10 crore each is available with all the DCs.”

As for the flooding in Bengaluru, Bommai said, the main storm water drains (Rajakaluves) are being developed and augmented at a cost of Rs. 1,600 crore; tender process for the works has been completed. Most of the problems would be solved once these works are completed, he added.

Replying to another question on the delay in distribution of bicycles, shoes and socks for government school children, Bommai said, they would be distributed. The Education Minister would soon initiate measures in this regard.