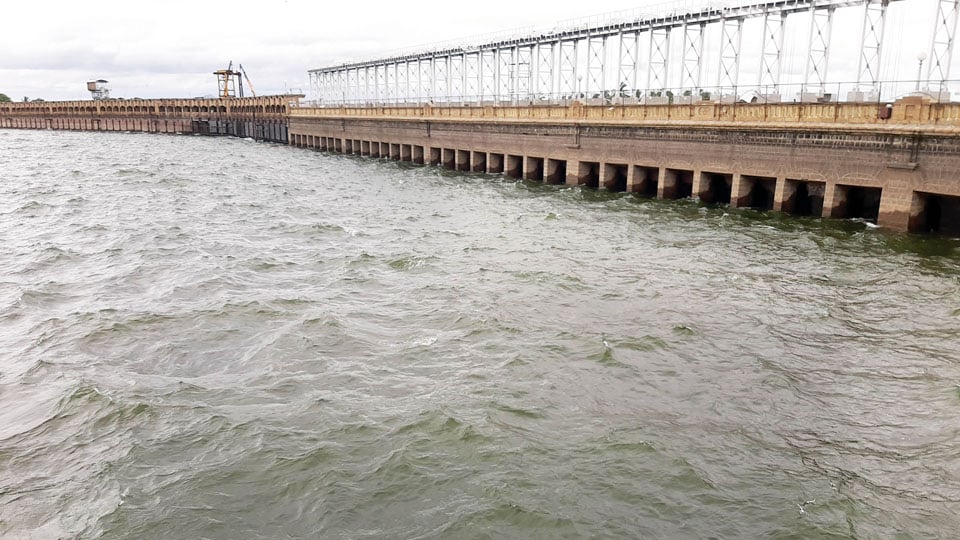 Mysore/Mysuru: With just 7.86 ft for the Krishna Raja Sagar (KRS) Dam to reach its maximum capacity, a flood alert has been issued as the water from the reservoir will be released at any moment. This morning’s water level stood at 116.94 against a maximum level of 124.80 ft.

According to the flood alert issued by the Cauvery Neeravari Nigam Limited (CNNL), the surplus water (above the full reservoir level) would be discharged into the river at any time. The alert comes at a time when there is an increased inflow as it is raining cats and dogs in Kodagu District, especially in Madikeri Taluk, the Dam’s main catchment area.

This morning, the inflow into the Krishna Raja Sagar was recorded at 33,602 cusecs and the inflow will only increase as relentless rain is lashing Kodagu, coupled with damages to powerlines and landslides.

Meanwhile, the Kabini Dam authorities have also issued a flood alert and said that over 4,000 cusecs will be released from the Dam today.

This morning, the water level stood at 2,276.79 ft against the maximum level of 2,284 ft. An inflow of 18,563 has been recorded as it is raining heavily in Wayanad district of Kerala, the Dam’s catchment area.

Orange Alert in Kodagu: In the last 24 hours, Madikeri Taluk has received 308.6 mm of rainfall, Virajpet 245 mm and Somwarpet received 310 mm. 152.5 mm of rain (highest in Kodagu yesterday) has been recorded at Galibeedu. The outflow of Harangi Reservoir has been increased to 15,580 cusecs. India Meteorological Department has again issued ‘Orange Alert’ for tomorrow (July 8) as heavy rain is expected to lash Kodagu.

Low-lying areas and riverside areas of T. Narasipur taluk, especially the area surrounding Talakad temples are vulnerable. Strict vigil has to be maintained at the Dam as well as in the downstream area and necessary precautions have to be taken to regulate the release smoothly without creating a flood-like situation in downstream area.

Release as per Dam manual

According to CNNL Managing Director Shankaregowda, water will be released to the river at any moment and people must take precautions. “The Dam manual prescribes certain cusecs of water to be released depending on the live capacity, dam safety, rainfall in catchment areas and inflows. We have been following a particular pattern and this year too we will follow the same,” he said.

Incidentally, CNNL is hosting a Stakeholders Consultation Meeting on implementation of an emergency action plan for KRS, Kabini, Harangi and Chikkahole Dams tomorrow at Kusuma-Chandrashekar Kalyana Mantapa in KRS.

As of today, the boating facility at Ranganathittu has not been affected as there was no water release from KRS Dam. But if Dam authorities increase outflow, boating has to be cancelled as the entire Ranganathittu on the banks of River Cauvery will be under water.  “Whenever say 10,000 to 15,000 cusecs of water is released, the bird sanctuary functions normally with boating facilities. But if outflow goes beyond 20,000, 30,000 or 50,000 cusecs, then we will have to stop boating,” said Forest Department officials.